More than 250 gather for Resist Harm rallies in Topeka, Omaha 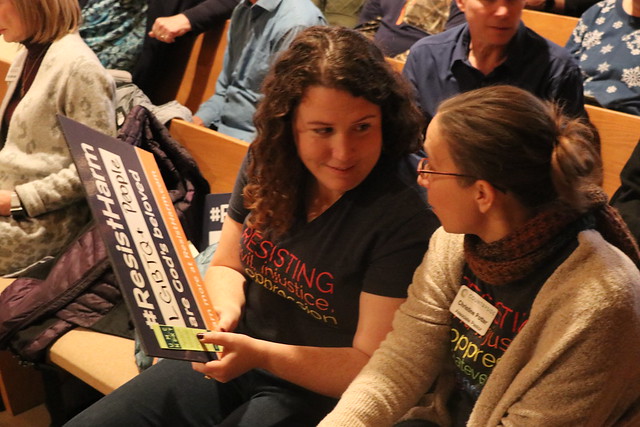 A day after the announcement of a proposal for a way forward for The United Methodist Church by letting more traditional congregations form a new denomination, clergy and laity in the Great Plains Conference gathered to support their LGBTQ siblings in two rallies.

The Resist Harm gatherings Jan. 4 had been scheduled for several months, but organizers said news of a proposed new protocol energized each meeting.

“It’s a much more exciting event than it was last week,” the Rev. Mark Holland, founder of Mainstream UMC, told an audience of more than 190 at Topeka Countryside UMC. More than 60 gathered at Omaha Saint Paul Benson UMC that afternoon.

“This is truly, truly, truly an amazing moment for our church,” the Rev. Lee Johnson, associate pastor of Prairie Village Asbury UMC, said at the conclusion of the nearly two-hour service in Topeka.

“This is a moment I feel like I’ve been holding my breath for for decades,” said the Rev. Karen Lampe, a retired associate pastor of the United Methodist Church of the Resurrection in Leawood and founding pastor of The Caring Congregation.

Holland, one of the clergy consulted in the first stages of the Protocol of Reconciliation and Grace Through Separation, explained some of the highlights of the proposal, which is expected to be voted on in May at the General Conference in Minneapolis, if it receives approval by the denomination’s Judicial Council.

“We must stay vigilant,” Holland said. “We must hold folks accountable to this agreement.”

Holland and Johnson were among 10 clergy and laity who spoke to the group about rights for LGBTQ persons in the church, primarily to allow same-sex marriages and for gay clergy to be ordained.

The Rev. Hyemi Jones, pastor of Shawnee Monticello UMC, took the story of Zacchaeus, and how Jesus used him as a means of reconciliation between the lost and the community.

“I can relate the people of LGBTQ with Zacchaeus. What if there is nothing wrong with people of LGBTQ?” she asked in her sermon. “What if they are already living a life of salvation? What if this story is calling us, the crowd, to embrace ‘the others?’ Affirming who they are beyond our differences?”

The Rev. John Collins, co-pastor of Abilene First UMC, invited those in the congregation to remember their baptism by reaching into water by the altar containing tokens with different pictures of trees on them. The trees symbolized strength, adaptability and comfort, among other attributes.

“Remember your baptism. Be thankful,” Collins said. “And get to work.”

Following the service at Countryside, about 75 of those gathered made their way to the Great Plains Conference office in Topeka to deliver hand-written letters to Bishop Ruben Saenz Jr., asking him for a moratorium on church trials under the new Book of Discipline rules approved in the February 2019 special session of General Conference until the regularly scheduled meeting of more than 800 delegates from around the world takes place in May.

Bishop Saenz was in Nebraska for a previously scheduled appointive cabinet retreat and not able to directly receive the letters. Scott Brewer, conference treasurer and administrative services director, accepted the letters and told the audience the bishop thanked them and blessed them for their concern.

Those in attendance received communion from Johnson and the Rev. Christine Potter, associate pastor at Countryside, before departing.

Bishop Saenz told conference staff members Jan. 6 that he will release a statement after discernment and meeting with the South Central Jurisdiction College of Bishops this weekend.

Those attending said they felt strengthened by the Resist Harm gathering.

“I have just always grown up knowing love is love, and people are people,” said Juliette Myers, a member of Emporia First UMC. “I think it’s about time that we’re getting there.”

“This is a powerful witness on behalf of inclusion and justice,” he said. “It was wonderful to be with other people celebrating the diversity of our conference.”

Gregory said news of the protocol proposal left him optimistic.

“I know the process is long and arduous,” he said, “but I’m hopeful.”

Each service contained a remembrance of baptism, which the Rev. Rebecca Hjelle, who attended the Omaha rally, said was meaningful.

"That was kind of the centerpiece for the whole conversation -- how do we live more fully into that vow to resist the harm being done?" said Hjelle, currently on leave of absence.

"There was a strong clergy presence -- lots of retired clergy," Hjelle said. "To me, that's always helpful to see those folks who have been in the system and have been serving the churches and the conference in a variety of ways ... continuing to stay connected to the conversation. It's encouraging."

Hjelle said those attending felt a sense of community by the end of the service.

"There was a sense of 'I'm not the only one who feels this way,'" she said. "There's now a network, a connection of people committed to resisting this harm.

"I think it give people hope that there can be change."

RELATED STORY: Pastor pleased with protocol announcement, but says more work has to be done.