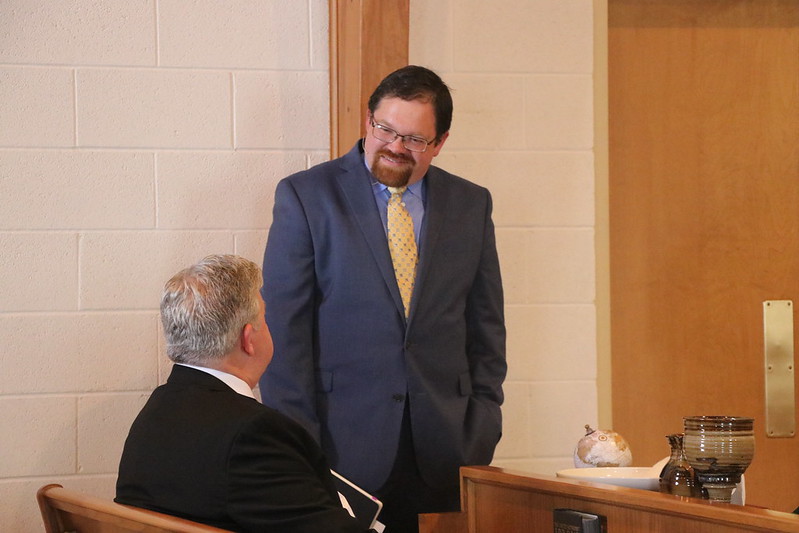 The Rev. Dr. Charles Murithi served up food for thought as he was installed as superintendent of the Prairie Rivers District and a portion of the Elkhorn Valley District on the weekend of Aug. 28-29.

His sermon on Sunday afternoon, he said at the Prairie Rivers installation ceremonies at Aurora UMC, was meant to complement what individual clergy preached about that morning.

“You had the main meal from your pastor,” he said. “What you need from me is a little dessert.”

Murithi spoke on the four marks of a successful church: A learning church, a church with fellowship, a praying church and a caring church.

One of his nine siblings in his family in Kenya, Murithi said prayer was very important, especially to his mother.

“The only thing I have of hers is my prayers,” he said.

Prayer and African heritage were also dominant in the music for the nearly two-hour service.

It was performed by the Umoja Choir from Omaha St. Paul Benson, a group of a dozen young people from five to six different countries in Africa who have all immigrated to the Omaha area.

“Everybody who stands here is a testimony of prayer,” Dieudonne Manirakiza, the group’s keyboard player, told the congregation of about 125 people.

Many in the group did not speak English, and Murithi addressed them in Swahili several times during the ceremony.

According to St. Paul Benson’s website, about half of the worshipping membership of the church is comprised of African refugees and their families. A noon Sunday worship service is bilingual in Kirundi and Kiswahili and is moving to become trilingual with the addition of English.

In officially introducing Murithi to the Prairie Rivers District, Bishop Ruben Saenz Jr. said the superintendency committee was looking for someone with the right temperament, listening ability and credibility to lead the district.

“The name that kept staying up there was Charles Murithi,” the bishop said. “He knows his way around the (former) Nebraska Conference and the state of Nebraska.”

Murithi worked for the Kenyan government for two years as a lab technician before coming to the United States, where he earned his master’s degree and doctorate in ministry, with an emphasis in evangelism, from Perkins School of Theology at Southern Methodist University.

His first appointment was in 2000 in the former Nebraska Conference, to Henry and Morrill UMCs, then Norfolk First, Norfolk Westridge and Battle Creek in 2005, to Alliance and Lakeside in 2010, and he served in Nebraska City from 2012 until his appointment as district superintendent.