An August immigration raid on a Nebraska community resulted in the arrest of suspected human traffickers, more than 100 families stranded – and First United Methodist Church in O’Neill scrambling to help.

“It’s been a rude awakening of our immigration system, and what the immigrant people have to endure,” said the church’s pastor, Brian Loy.

After the Aug. 8 raid by Immigration and Customs Enforcement (ICE) officials, 17 business colleagues were arrested on charges connected with human trafficking that resulted in immigrant labor in a tomato harvesting business, potato farmer, livestock farms, a Hispanic grocery and a Mexican restaurant. 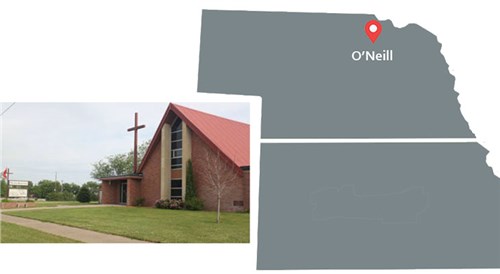 Those laborers – most of whom are from Guatemala, Loy said – were paid a small amount for their work by the business, which controlled their taxes, legal fees and housing.

“The pain that this organization has caused is inexcusable,” Loy said of the allegations.

The O’Neill church, at the suggestion of ICE officials, has become a headquarters for those seeking to enter the United States legally, with attorneys in place to help them with the process, although Loy says “the system is about a year and a half behind.”

“Basically our church right now is a hub for the immigrants to connect with attorneys to get paperwork in the system, so they aren’t rearrested and deported,” Loy said.

A food bank, as well as center for used clothing and bedding, has been set up in the church basement. Surprise donations of baby formula and diapers, sent through Amazon, have come in from across the country, Loy said.

Volunteers from not only the O’Neill church but from as far away as Valentine and Ainsworth, Nebraska, have made their way to the church to assist.

“They’re spending their days loving on the people as they come in the door, feeding them – because most of them have not eaten in several days – and then connecting them with food and other stuff,” Loy said.

Loy, a Course of Study student at Iliff School of Theology in Denver, was in Colorado when the call first came for assistance. His father, the Rev. Glenn Loy (a retired pastor and district superintendent now serving a church in Elgin, Nebraska), assisted in the first few days, as well as the Rev. David Randall (pastor at Ainsworth-Johnstown and his network leader). Several elders were summoned by the Rev. Lance Clay, Prairie Rivers District superintendent.

“People stepped up,” Clay said. “Women showed up at the church asking what they could do. They were ready to feed, they were ready to put beds in there to take care of the kids and help the families out.”

Glenn Loy said he was impressed with the rapid response of the volunteers.

“It was a personal thrill to watch Christianity in action,” he wrote in a report to Clay.

Although an offer was made to house immigrants at the church, they chose to bed down for the night at a Hispanic church in O’Neill.

Brian Loy returned to O’Neill that weekend and found that some of the children hadn’t eaten in two to three days before the raid.

“It just rips your heart out,” he said.

He also saw the immigrant families respond positively to the kindness shown by volunteers.

“Everything you give them, they’re so gracious – and just a hug to know they’re accepted. Because right now, they trust none of us white people,” he said. “We’re slowly breaking that barrier down.”

The church is working with the Multicultural Coalition of Grand Island, which has previous experience with United Methodist churches.

“They’re experts. They’re at the top of their game,” Loy said. “We’ve just become the hands and feet under their direction.”

The assistance given to the immigrants has been felt through the community, Loy said.

He was told, “After experiencing the love of Jesus that we feel in your church, we don’t think it would be so bad to be a United Methodist.”

VIDEO FROM NTV NETWORK: Immigrant Legal Center helps those stranded after the raids.