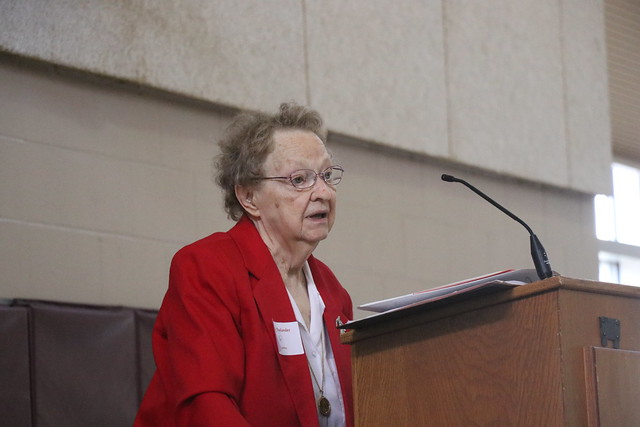 Ruby Thelander from Lincoln, who was among the founders of the event co-sponsored by United Methodist Women, is stepping down as its chair.

“I’m going to stay on the committee, but I’m not going to lead it anymore,” said Thelander, who turned 90 a few days before the Feb. 8 briefing day. She added with a laugh, “I’m staying on the committee because I won’t be able to stand not knowing what’s going on.”

The after-lunch session that was supposed to be devoted to writing state legislators turned into a salute to Thelander. Members of the briefing day committee each stepped to the podium with a single yellow rose – a favorite gift of her late husband, Roy – and gave it to her to create a bouquet.

Many lauded the work she had done over the years.

“She has been a constant force in Nebraska for a number of justice issues,” said the Rev. Dr. Ron Roemmich, a retired United Methodist pastor from Omaha. “Without Ruby, I don’t know when this thing would have just collapsed over the years.”

Thelander’s family from Minnesota made the trip for the tribute, including two of her toddler great-grandsons, sporting “Team Ruby” T-shirts.

In an interview before the tribute, Thelander said that despite skeptics over the past 45 years, the Nebraska Ecumenical Briefing Day has proven to be vital.

“People need this. They need to know what kinds of laws are being passed and what we can do about it,” she said. “Luckily in Nebraska we’re small enough that we can make a difference. We have made a difference. I can show you laws that we helped get passed.”

Thelander said that some of the workshops may have the same titles year after year, but the information is always updated and changing.

“They all have different content (than in previous years), so even though it says ‘immigration’ it looks at it at a different way than it did before with different leadership,” she said.

One workshop always has enough of a preregistration that it moves into the sanctuary of Lincoln Christ UMC, the briefing day’s home for the past 15 years — for 2020 it was public school financing.

“This one is so timely, with the referendum that’s going on right now in Lincoln,” Thelander said. Days after the briefing, voters passed a $290 million bond issue that would make way for two new high schools.

This year, 180 people gathered for the briefing day, an increase from 167 participants last year. Some years have topped out at more than 200, Thelander said, which has brought questions of moving into a larger venue, away from what she says is “ideal” at Christ UMC.

Thelander credits the talent of her current committee for her decision to step down. Six years ago, she said, there were only three on the committee, dwindled down because of the deaths of two members.

She publicly asked for volunteers, which increased the participation on the committee.

“It’s something that needs to happen because there are so many people who don’t have a voice,” she said. “They think they don’t have a voice. Early on, some of the women would say, ‘Who would want to read what I write? I’m a nobody.’ And convincing them that nobody is a nobody, that everybody makes a difference. They get another enthusiastic jab to pay attention to what’s going on.”

Among the attendees was the Rev. Amy Slater, pastor of Lincoln South Gate UMC, who moved last July from Hutchinson, Kansas.

“This really helped me to understand how government works in Nebraska — what issues are important to the various churches here in this area of the country, and what’s facing us,” said Slater, who attended sessions on racial justice and water availability.

“It brought to light a lot of issues I was honestly unaware of,” said Omaha native Mayela Hernandez, a freshman majoring in political science and minoring in Spanish. “I think it’s cool to do it with a group of people who are really passionate about this sort of stuff.”