Bishop Ruben Saenz Jr. and the Cabinet have announced that the Elkhorn Valley District in northern Nebraska will not be receiving a new, single district superintendent when Davis retires from his position at the end of the appointive year June 30. Instead, the district will be served by three DSes – the Rev. Lance Clay, Prairie Rivers; the Rev. Bill Ritter, Blue River; and the Rev. Chad Anglemyer, Missouri River. Each DS will be responsible for a pre-determined number of networks of churches.

Bishop Saenz said the dividing of Elkhorn Valley District into networks will make the task of providing leadership in setting ministry strategies more manageable for the three DSes new to the Elkhorn Valley area. And the dynamics of the networks will provide a collaborative atmosphere in which new ministries will take shape.

“When leaders and congregations come together to form regional networks, new possibilities open up, innovation occurs, and our resources, gifts, and graces are synergized and harnessed to produce a greater growth in new disciples and a greater, more comprehensive missional impact in the region,” Bishop Saenz said.

In the new appointive year, Karges will serve as the DS for both the Gateway and Great West districts, with the latter region already working under the network system for several years.

“The Great West network ministry has adapted in response to time, change, and needs,” Karges said. “I believe the flexibility of the networks allows for more quick responses to needed and desired adaptation for enhanced ministry. In return, the United Methodist connection is strengthened.  I have seen God at work in the three current networks I relate to.  I look forward to working with the additional two networks and to the Great West District as a whole.”

The networks concept returns the Great Plains Conference to the roots of the Methodist movement as envisioned by John Wesley that relied on a presiding elder supervising churches or classes within a given geographical area, sometimes referred to as a circuit. In the Great Plains Conference’s system, a church – in many cases a county-seat congregation – serves as a hub for a network of churches that share many aspects of ministry, such as cultural norms, economic concerns, and geographic likenesses. The pastors and laity within those networks work together to share best practices, solve problems and capitalize on opportunities to serve in ministry within their mission fields.

“The key drivers of the network system are passionate clergy that are empowered and encouraged to replicate themselves – and dramatically increase their missional impact – by apprenticing our gifted laity on competencies and skills for pastoral care, preaching, and faith sharing,” the bishop said. “Through apprenticeship, pastors lead people in discipleship and evangelistic outreach that others might come to know Christ and to follow him. In some areas where laity start small groups with new people, new self-sustaining congregations will form.”

While a retirement from the Cabinet may be the impetus for this particular shift in duties for district superintendents, the move to networks is part of a strategic plan for bolstering ministry throughout Kansas and Nebraska.

Davis said he’s encouraged by the growth in the past year of networks where pastors and churches share ideas and resources.

“I think that’s the future,” he said. “You keep it in the context of the community, and now there’s this geographic network that can build on what people are doing.".

Ritter said the strategy to call three district superintendents to relate to churches in the Elkhorn Valley District is an exciting challenge.

“I am looking forward to working with the laity and pastors of the two networks that I will be relating to directly,” he said. “The network system relies on the gifts and graces of the folks in the local church, and it is the people who will make this new model possible.

“It recognizes that the focus of making disciples does not happen in the conference or district office,” Ritter continued. “Disciples are made in the local church. I look forward to being a resource for those in the field who are reaching lives for Jesus Christ.  I am also very excited about joining my colleagues Chad and Lance in this collaborative work we will be doing together." 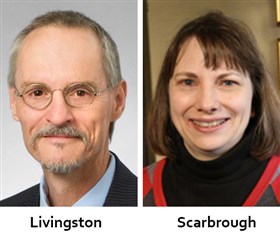 Bishop Saenz said Christ gave followers the mission of helping people find their way back to God, and we have everything we need to accomplish the mission.

In other Cabinet news, the group announced that the Rev. Kay Scarbrough will remain an additional year as the Topeka District superintendent, and the Rev. Dennis Livingston will remain an additional year as the superintendent of the Hutchinson District, with additional duties he assumed in 2017 in the Hays District. District superintendents usually serve in that role for six years, and both Scarbrough and Livingston otherwise would have been scheduled to return to a local church or extension ministry.

An announcement about a new superintendent for the Kansas City District is anticipated soon. The Rev. Dr. Bruce Emmert will leave the Cabinet effective July 1 to serve as lead pastor at St. Andrews United Methodist Church in Omaha. Read about the St. Andrews UMC appointment.