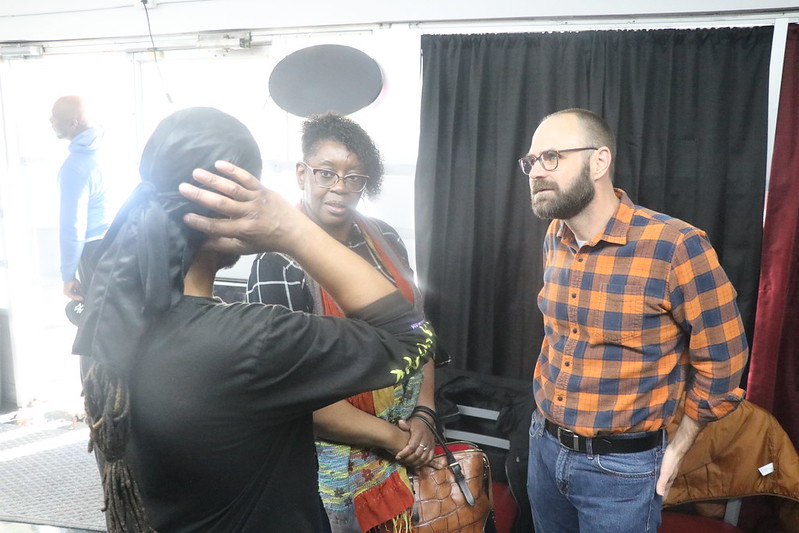 As a candidate for bishop in The United Methodist Church this summer, the Rev. Dee Williamston got a wild hair.

The director of clergy excellence and assistant to the bishop at the time, she was talking to the Rev. Jeff Clinger, director of congregational excellence, at the conference office in Topeka.

“We were just bantering because I just got my hair cut,” she said. “I said, ‘Maybe if I get elected bishop, I’ll shave a cross-and-flame on the side of my head.’ And he was like, ‘Yeah, let’s do it.’

“He came into solidarity with me.”

She had almost forgotten her promise until an executive team meeting after returning from the South Central Jurisdictional Conference in Houston, when Clinger reminded her.

And so, nine days after she was elected as the first Black female episcopal leader in the jurisdiction, Bishop Dee Williamston made good on her promise.

With consideration that the cross-and-flame, the United Methodist symbol since 1969, might not translate well to strangers, Williamston and Clinger opted instead for #BeUMC, the church’s grassroots efforts to celebrate what draws people to the denomination.

Bishop Williamston booked the shave at A Different Level Barbershop in Topeka, whose owner, Wanda Collins, usually cuts her hair.

“I think it’s great,” Smith said of his assignment. “This is the first for a bishop.”

Clinger had been involved in a similar stunt once, promising his congregation at Tonganoxie UMC he would shave his head if they collected enough cans of soup for a local food pantry.

For about 45 minutes each, Clinger and Bishop Williamston sat in Smith’s barber chair until their walking billboards were completed.

They were both pleased with their look and the message they’re sending.

“I love it,” Bishop Williamston said. “I hope it creates conversation with people who say, ‘What is #BeUMC?’”