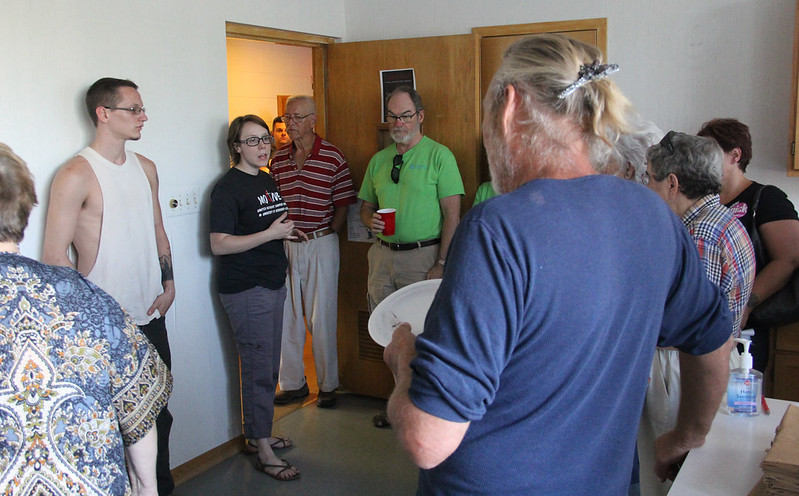 But something energized her to make the effort, so she found her way to the student union and the room in the corner where students gathered to sing praise songs and listen to a brief message. Little did she know that she would leave with a notion that a vision of hers to help students and others in the community near her residence would be fulfilled.

Menhusen lives near the East Campus at UNL, a neighborhood that is among the lowest in terms of household income in Nebraska’s capital city. She would pass by the then-shuttered former Faith United Methodist Church building near the intersection of 33rd and Starr streets and think about the mercy and justice ministries that could be conducted out of such a facility. Faith was closed not because of any structural issues but because of dwindling attendance as it merged with two other congregations to become New Hope United Methodist Church.

Still, Menhusen didn’t know if there was any way for her vision to come to fruition.

“People told me I was crazy,” she said.

Ritter was the guy who held the keys to that former Faith UMC building that had captured Menhusen’s imagination.

“She shared with me her vision of a mission location at the former Faith UMC,” Ritter said. “I was so impressed that this young Christian looked at this location and saw the opportunity to serve God. Beth definitely understood that the calling and purpose of United Methodist churches is to make disciples of Jesus Christ.”

Ritter said he knew the building could be put to use, but he needed to be certain that the mission focus of such a ministry was more than just a dream, so he asked Menhusen to put together a detailed proposal. It included:

The document also included core values, a statement of the need in the neighborhood and a solution, complete with a proposed calendar of how the facility would be used, by hour, for each day of the week – from a food pantry for struggling UNL students, to an after-school mentoring and tutoring program for children at two elementary schools, to a clothing closet for professional dress to help people look appropriate for job interviews, to worship settings for college students and neighborhood residents alike.

“My goal is to get college students involved,” said Menhusen, who earned a degree in nutrition and dietetics, and who is now starting seminary classes through Illiff School of Theology based in Denver. That involvement means providing some help to college students when needed and then using the skills those students have to help the surrounding community.

It’s an opportunity that resonates with Chesnut, who is starting her second year as campus minister at UNL.

“The goal is to connect college students with the surrounding community with a unified passion for outreach,” Chesnut said. She explained that partnerships are important in these early days for ConnectioN Point. The new ministry has partnered with a Lutheran campus ministry to expand the “Open Shelf” food pantry for UNL students, faculty and staff who need it. ConnectioN Point is working with a Presbyterian church on an after-school program for children on Wednesday afternoons.

“We’re connecting the spokes, not reinventing the wheel,” Menhusen said of the ministries starting at ConnectioN Point.

But first, a building that had been sitting without activity since 2012 had to be revitalized. And that’s where two churches with ties to the project – Christ UMC and Saint Paul United Methodist Church – stepped up. Menhusen is a pastoral intern at Christ UMC, and Chestnut is based out of Saint Paul.

“This is part of our DNA at Christ Church, to be involved in outreach, so we’re excited to have the opportunity to be the hands and feet of Christ,” said the Rev. Richard Randolph, who is lead pastor at Christ United Methodist Church in Lincoln and a pastor with a long history of leadership in mercy and justice ministries.

Randolph and Menhusen also met during a campus ministry worship service, when Randolph was filling in for Chesnut. During a conversation following the service, Menhusen described her idea for ConnectioN Point. Initially Randolph thought that Christ Church might be able to help with volunteers.  However, as the pair continued to talk, they developed a vision in which Menhusen could gain some experience in a more traditional ministry setting as a pastoral intern at Christ Church, while leading the launch of ConnectioN Point.

A small army of volunteers from both churches, as well as Trinity UMC in south Lincoln, cleaned the building, made repairs where necessary, and hauled out loads of trash and materials that wouldn’t be put to use in the new outreach center.

Tom Lamberson, Missions Committee chair at Saint Paul UMC, said volunteers helped with the overall cleanup effort, both inside and out.
“I think I was in charge of rose bushes,” he said. “I have the scratches to prove it!”

On a more serious note, Lamberson said ConnectioN Point provides a new opportunity to reach out to people who need to know about the love of Christ.

“Campus ministry is important, and the opportunity to use the building there gives us a chance to expand it,” Lamberson said. “These kinds of ministries are important not just for the congregation but from the United Methodist Church’s perspective.”

Menhusen already has seen a positive reaction from the community. She shared a story of when volunteers were helping build shelves for the food pantry.

“A woman was walking across our parking lot, and I approached her,” Menhusen said. “She said, ‘I always wanted to see something happening here.’”

Menhusen gave her a tour of the building. By the end of their discussion, the woman had learned about a cookout scheduled for late August to introduce the facility and its ministries to the neighborhood. The woman told Menhusen that she liked to cook and offered to bring a dish to share.

One point of coincidence was the woman was just returning from registering her child for kindergarten, a child that may benefit from the after-school program planned for ConnectioN Point.

“We’re happy to have a place like this where we can do outreach ministry,” Menhusen said. “I’m really excited about the possibilities.”

To get the word out about the new ministries, Menhusen and others spoke to neighborhood associations, visited with resident assistants at UNL dormitories and spoke to leaders at the Center for Civic Engagement on the college campus.

The message is that while this is a new ministry opportunity, the goal is for ConnectioN Point to provide services long into the future.

“The hope is to stay here and share a purpose in the neighborhood and on the campus,” Chesnut said. “This all came together in such a special way. There’s no other way to explain it other than God has His hands on all of this.”

Ritter said the new ministry is being helped for now by the Blue River District, which is providing the rent, insurance and utilities for the former Faith UMC building. One concern is that New Hope UMC may seek to sell the building at some point, but use of it has been secured through May 15, 2017, in part to see how well the new ministry takes hold in the neighborhood.

“My vision is to make this a district-wide mission opportunity with all churches of the district providing volunteers and using our district mission shares to support this ministry,” Ritter said. “I wish we had the funds to purchase the building because I believe we have great things we can be doing for Christ in this area. The ministry of the Faith United Methodist Church has not ended, it is just beginning a new chapter that is yet to be written.”

Randolph said ConnectioN Point could serve as an example for living out faith in Jesus in the 21st century.

“I truly think this is the best, most interesting time to be in ministry in 500 years,” Randolph said. “We all know about the problem of numerical declines experienced by The United Methodist Church as well as other denominations. But problems can also provide opportunities to be creative and explore new forms of ministry, to re-examine what it means to be a church. I believe that ConnectioN Point is a model for this creative re-thinking of Christian discipleship.”