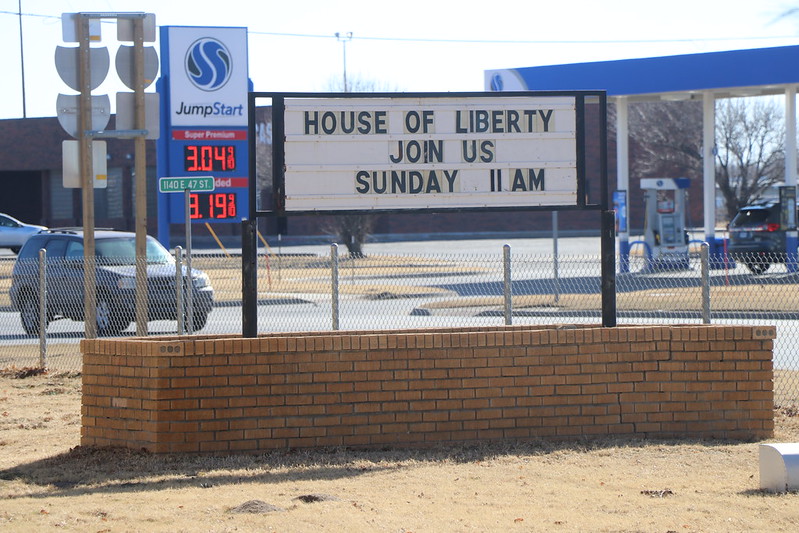 Sunday morning services at Wichita House of Liberty United Methodist Church have all the fervency of a Black church experience, with a congregation that’s mixed race.

“We may be smaller in numbers, but we are mighty in the kingdom,” worship leader Claire Jobe told about 30 people at the beginning of the service.

House of Liberty, 1140 E. 47th St. S, opened at the beginning of the year as a multicultural church — albeit unintentionally.

Joseph Moore, a parttime local pastor, had been serving a church in northern Sedgwick County and had a parting of the ways with many of the members, leaving after five months. Meanwhile, Wichita Cedar Chapel UMC in the south part of town was in the process of closing, with only about a dozen regular attendees.

“We had Cedar Chapel closing, so we had a perfect opportunity,” said the Rev. Dr. Mitch Reece, superintendent of the Wichita East and West districts. “We had a local pastor we didn’t have an appointment for, and we had a church closing in a section of town where we’re underserved.”

The church, down to the name, has been a dream of Moore since he was a soldier in the U.S. Army, serving three years, including one year in Iraq.

However, he didn’t think he could lead a church.

Moore had a spiritual awakening during a week he spent in the hospital in late 2020, as COVID-19 aggravated his asthma into pneumonia.

“They told me I was on death’s door if I hadn’t got there,” he said. “God told me at that moment I’d been called to pastor. He said ‘I know you’re nervous at this moment, but I haven’t fulfilled what I have called you. This is not until death.’”

A former director of music at Wichita Saint Mark UMC, Moore began licensing school to become a parttime local pastor. He also went to barber college and owns his own shop, Liberty Cutz.

“Everybody wants a haircut. Everyone’s looking for a barber,” Moore said, grateful the barber college waived the first $5,000 of his $15,000 tuition and allowed him to make monthly payments.

A father of seven, Moore plays keyboards with the House of Liberty praise band, which is a family effort: Two of his sons play keyboards and bass, and his brother plays drums. A longtime friend plays the saxophone. The sermon on a recent Sunday morning was given by Moore’s sister Olympia.

Moore quickly involved the youth of the church in the services. Two of them stood at the front of the sanctuary as church members filed past to contribute their offerings.

“We’re training children and youth that want to be involved,” he said. “I’m excited because that’s my vision. I don’t just want to be a church that dies off. My passion is to empower the youth.”

House of Liberty members Richard Cravens and Dave Klamm are both fans of Moore and his ministry.

Klamm was at Moore’s former church and is one of about a half-dozen members to move with him to House of Liberty.

“I saw his love for God and spreading that. I saw what he did in a congregation that was a little stale, a little stagnant,” said Klamm, a retired Kansas Bureau of Investigation agent whose wife, Regina, sings in the praise band. “It was something I wanted to be a part of.”

Cravens has known Moore for many years and was inspired to follow him to the new church after being a member of Saint Mark for 45 years.

“I’ve seen his strong music ministry, his love for youth,” said Cravens, a retired financial planner and electrical engineer. “I saw him starting off and thought he had a passion for the Lord.”

Reece praised Moore’s ability to bring a variety of people together.

“I think Joseph has had a lot of life experiences,” he said. “He has a lot of passion for sharing the Gospel. He knows the ups and downs of life, so I think he identifies with a broad range of people.”

After just knowing each other for in some cases only a month, members of House of Liberty greet each other with handshakes and hugs and talk and laugh like longtime friends.

“I think we all learn from each other,” Klamm said. “I certainly have learned a lot, and I’m just amazed at how positive everything has been. It really feels so much like a family.”

Seeing Black and white people worshipping and working together has been encouraging for Moore.

“To me, in my mind, racism is the enemy that’s attacking, that’s causing division in the world, in the church,” he said.

House of Liberty will have a grand opening sometime in the spring, and Moore said the church has already been working on community outreach, including adopting nearby White Elementary School where his wife, Marchelle, is assistant principal.

Reece said House of Liberty is in an area in south Wichita that is in transition, with a higher crime rate than the rest of the city and a growing number of Hispanics and Asians moving to the area.

Moore said he would welcome all races to the church.

“People can come here,” he said, “and worship in freedom.”