After leading the vote for 17 previous ballots, the Rev. James “Jimmy” Nunn was elected July 14, 2016, as a new bishop by delegates at the South Central Jurisdictional Conference in Wichita, Kansas.

Nunn, 59, the director of mission and administration for the Northwest Texas Conference, was selected on the 21st ballot with 126 of the 418 votes cast by the delegates, equally comprised of clergy and laity. Delegates voted for two candidates on the ballot because two positions remained to be elected at the time.

“I listened and prayed,” Nunn said of the wait for the election. “I didn’t keep a tally of where things are.

“Being anxious over a series of ballots was not helpful to me.”

His episcopal area assignment will be announced following the election of one final bishop positions in the jurisdiction, which includes the states of Nebraska, Kansas, Missouri, Arkansas, Oklahoma, New Mexico, Texas and Louisiana.

Nunn had been the top vote-getter since the fourth ballot, the first following the election of the Rev. Ruben Saenz Jr. of the Rio Texas Conference.

Nunn has been mission and administration director of the Lubbock, Texas-based conference since 2011, serving for two years prior to that as the Northwest Texas Conference’s director of church development.

As director of mission and administration, Nunn leads efforts to plant new churches and recruit young and diverse clergy, as well as developing new leaders and sharing the story through modern methods.

He had previously served as pastor of three different churches in Lubbock, as well as the superintendent of their district.

A native of Lubbock and a pastor since 1981, Nunn earned his bachelor’s degree from McMurry University in Abilene, Texas, and his master’s of divinity and doctor of ministry degrees from Asbury Theological Seminary in Wilmore, Kentucky.

He and his wife, Mary, a piano teacher with her own studio, are the parents of two grown children. 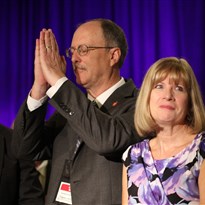