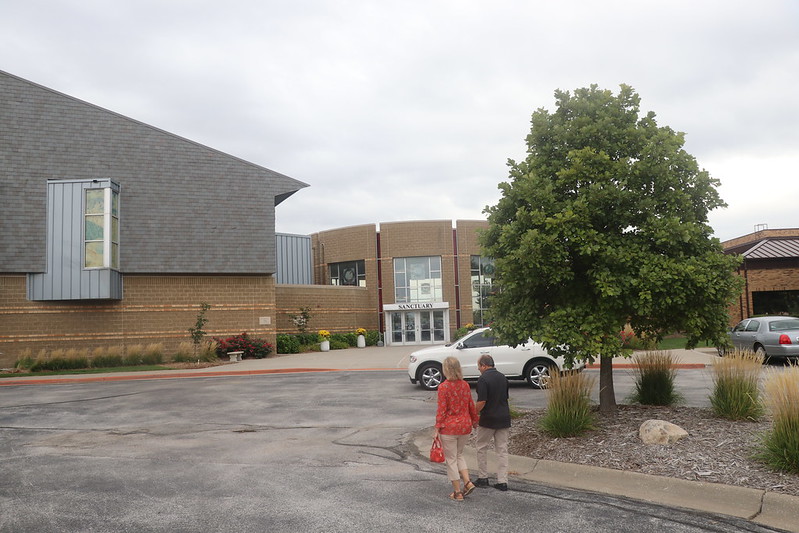 Now a burgeoning suburban area with busy shopping centers and restaurants, the spot that would become St. Andrew’s United Methodist Church was in the middle of farmland.

“I was appointed to come here basically with a vacant lot and a phone book,” Winseman recalled with a laugh. “Our whole plan all along was that we weren’t going to be small for long, just because of the growth in the western part of the suburbs.”

Indeed, in the 30 years since St. Andrew’s has chartered it has become one of the largest congregations in Omaha.

That anniversary was celebrated with a service and reception on Sept. 18.

Kevin Kathka was one of its charter members.

“There was nothing but cornfields out there then. Even when the church was built there were cornfields around it,” he recalled. “They saw the growth that was coming in this area, and there really wasn’t a Methodist church to serve that.”

The roots of St. Andrew’s began with a small group meeting at a west Omaha home to talk about forming a congregation. The next month, 240 people attended a Christmas Eve service at Millard North High School, the church’s home for several years.

Winseman said that more than three-fourths of the initial attendees were either unchurched or dechurched.

“We’ve had some good members as some of the pioneers from surrounding churches, and a lot of support from churches in the Omaha District,” he said. “Most of our members were new to church.”

“The growth happened with both suburban neighborhoods and huge apartment complexes within a three-mile radius of here,” he said. “They grew off the energy of new people who were finding the love of Christ through Christian community.”

Rev. Christine Jorgensen, who has served as pastor at St. Andrew’s since July, said the goal of the congregation was “not to be a big church but a life-changing church.”

“That’s been part of your DNA, to welcome everyone from the very beginning,” she said in her sermon.

A 1,000-seat sanctuary with concert lighting for the chancel and an atrium welcome center with floor-to-ceiling glass was completed in 2004.

The flurry of activity during the anniversary celebration is typical for the church, Anglemyer said.

“It’s like that seven days a week, and it’s not just because of the grand facility,” he said. “It’s more the people who are here. They’re engaged with one another. This is a congregation that rejoices in being together. They’re dedicated to their faith life. With the great pastoral leadership that they’ve had through the decades, they grow stronger every year.”

Winseman, who retired as a pastor in 2021 while continuing to work for the Gallup Organization as a learning development consultant, began attending the church last year.

“St. Andrew’s really plays an important role here — a progressive orientation, very welcoming, which has always been a part of it,” he said. “The message and the spirit of welcome and of mission and of outreach and making a difference has been part of our DNA.”

Kathka said the people at the church are the reason he’s been with St. Andrew’s from the beginning.

“I’ve been involved with all sorts of aspects of the church through the years, and even though there’s been a lot of change, people come and go, but what’s kept me here has been the associations I’ve had,” he said. “It’s always known as being a welcoming church.”

Jorgensen, who previously served Omaha Hanscom Park UMC, said she wasn’t incredibly familiar with St. Andrew’s until she began discussions with Anglemyer about an appointment. She was heartened by the approval of a values statement church members had agreed upon shortly before her appointment to be an inclusive and welcoming church.

“Now we have the opportunity to see what that looks like put into practice,” she said.

Now more than 3½ months into her appointment, Jorgensen said she is impressed with the range of missions and discipleship that the congregation has.

“There’s so much incredible potential here,” she said. “One of my favorite things about this congregation is that we have prayer warriors and social justice warriors. I think that’s unique in the life of a congregation to both be clear about deep spiritual identity, a relationship with Jesus and caring about both mercy and justice, making sure that the world is being transformed because of what happens Sunday mornings at church.”

The church will continue what Jorgensen called an “entire natal season” of celebrating its anniversary with a “Soup & Hymns” night on Oct. 23 and a ‘90s-themed prom on Oct. 26, encouraging church members to invite friends.

“We can show them just how warm like soup and unstuffy like MC Hammer that we can be,” she said.