Ordinands celebrate completion of next steps into ministry

Revs. Mike and Allison Marcus have been taking their steps in ministry together and were side-by-side June 12 as they both became provisional deacons.

“Getting to go through ordination together as a married clergy couple was really special,” Mike said.

“It’s really powerful to do it together,” Allison added.

Both said they were swept up by the symbolism and the tradition of the Service of Recognition, Commissioning and Ordination at Church of the Resurrection.

“It was very meaningful and moving,” Allison said. “The point where everyone stands up when you’re getting hands laid on you -- it’s just so powerful to remember how many people have guided you along this journey.”

The ceremony was not open to the public, but those commissioned and ordained could invite family members.

“It was great to be able to be surrounded by a lot of family and clergy colleagues we haven’t been able to see, especially a year and a half into COVID,” Mike said. “It made it that much more significant.”

During the ceremony, the Marcuses said they were thinking back to the struggles they had in their studies and the rocky roads both had on their way to ordination.

“We were reminding each other about pulling the other one through,” Allison said.

Allison will enter her residency for a chaplainship at St. Luke’s Hospital in Kansas City, Missouri, while Mike will continue his work as a deacon as pastor of presence ministry at Lenexa St. Paul’s UMC. Allison has been director of student ministries at the same church.
Following the ceremony, the ordinands gathered in the church lobby for hugs and gifts from their families. Some of the African-born pastors and their families started an impromptu dance celebration.

“It was a great ceremony,” said the Rev. Kalaba Kapundu, an associate pastor at Grand Island Trinity UMC commissioned as a provisional elder. “People have celebrated in different ways.”

Rev. Lacey Wheeler, commissioned as a provisional elder, said she envisioned all sorts of worse-case scenarios about the ceremony, like falling on stage or sliding down the stairs. Thankfully, none of those happened.

“It was a very meaningful experience, and I could definitely feel the Holy Spirit present. It was profound,” said Wheeler, entering her second year as pastor of Marquette UMC in Kansas.

The day, she said, left her full of “excitement and hope and encouragement.”

Rev. Tino Herrera, commissioned as an elder in full connection, said he was humbled and grateful after the ceremony.

“A lot of emotions, but more affirming in the love of God and the great saints who are here with us and who have gone before us,” he said.
The ceremony was especially meaningful for him since it took place at Church of the Resurrection, where he is a congregational care pastor.

“It’s where I started my ministry four years ago, moving here from out of state, and going through this process,” Herrera said. “It’s like a place of home.” 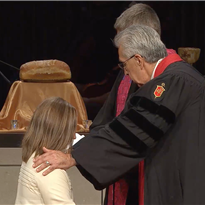