Out of Africa, into the Great Plains

The Rev. Alice Koech quickly broke the ice with the congregation of First United Methodist Church in Hays, Kansas, when she began as associate pastor last year. 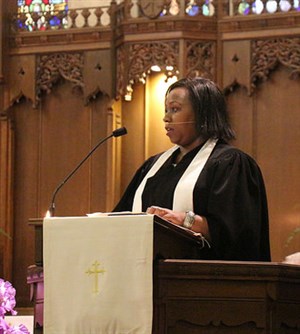 “Some of you don’t know where my accent is from, and I’ll tell you,” she added. “It is from Nebraska.”

Before the 2014 union of the former Nebraska, Kansas East and Kansas West conferences that created the Great Plains Conference, the two states already had a history of reaching out to Africa – Kansas maintained a connection to Zimbabwe, and Nebraska was linked with Nigeria.
Since the union, those bonds have only strengthened.

“That mutual relationship opened up opportunities to know people. When some of those people needed places to serve in America, we welcomed them,” Bishop Jones said. “The hospitality of the Great Plains made this a place they would be interested in talking to, because they knew they would be welcomed here.”

The Great Plains was not the first American stop for either of the Koechs.

Ezekiel, 46, went to Asbury College in Kentucky for a year as part of an exchange program. While his original plans were to return to Kenya to become a pastor, there were no openings in his home country. The former bishop of the Nebraska Conference offered him a charge in the Great West District.

“I realized I could minister anywhere,” Ezekiel said. “God kind of opened up my world view, expanded it.” 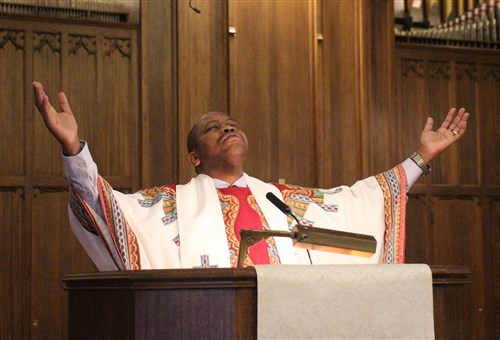 Alice, 42, grew up in another Kenyan village, feeling the call to ministry while she was still in high school. She proceeded with seminary against the wishes of her family members, several of whom weren’t Christian.

“My own family was opposed to me going to Bible college. They had reservations,” she recalled. “They wondered what kind of job that was. How would you be able to live on offerings? How would you survive on that?”

In Africa, she said, there weren’t many female role models in the ministry.

“The church we were a part of at that time did not have a lot of women in ministry,” Alice explained, “And women who were in ministry did not have that as their jobs. It was an additional thing.

“They were not opposed to women in ministry, but they did not recognize that it was something you could do as a vocation,” she continued. “They looked at it as, ‘You could serve in ministry while doing something else.’”

Celebrating their 22nd wedding anniversary this year, the Koechs have three children: Roy, 19; Abigail, 14; and Zachariah, 10. The children consider themselves Americans, their parents said.

Alice Koech will return to Kenya this summer, to her home village, as part of the Water and Sanitation Program sponsored by the United Methodist Committee on Relief, or UMCOR.

"This is an opportunity to share God's love," she told the Hays congregation recently. "To tell them, 'God cares about you.'"

The Koechs said they experienced more of a culture shock moving to Kentucky than they did being in Nebraska or Kansas.

“I thought America was all like Kentucky, it was all the same,” Ezekiel said. “When I came out west, I realized it was different. There were places that raised cattle with huge feedlots, huge farms with huge machinery I had never seen before.”

While in Nebraska, the nearest grocery store was in Sidney, 30 miles away, and it didn’t have some of the delicacies to which they were accustomed.

“You couldn’t get the tea leaves we used to get, the cornmeal we used to get. There was nothing like that,” Ezekiel said. “That is what we really missed.”
The couple also learned to make accommodations for the two passions of their Nebraska parishioners: Farming and football.

Ezekiel recalled a time when he made an unannounced visit to a farmer in his congregation.

“He was busy doing his thing, and he couldn’t give me any attention,” Ezekiel said. “He liked me, and he respected me as his pastor, but I went to him at the wrong time.”

Likewise, there’s a passion for the Big Red.

“Nebraskans really love their football,” Ezekiel said with a laugh. “If you go and visit them during that particular time, you won’t get any attention. They tell you to sit down and watch the game.”

Both Ezekiel and Alice made jokes about their accents in their first sermons to their new congregations, but are serious about the ability to communicate and be understood.

“I wanted them to hear my message, but because of my accent I thought it was a limitation,” he added. “But it was not a limitation. The more they came to church, the more they understood me.”

Alice said her parishioners have realized that communication is a two-way street.

“When you lay it out there for people to acknowledge it, you’re giving them the chance to feel at ease that you recognize that about yourself and that they also have a role to play,” she said.

“This is something we both have to work on,” Alice added. “I work on words that are difficult for me to pronounce … and for the people listening, they have a role to also listen more carefully. For the most part, I feel like I haven’t had any problems, at least that I’m aware of, in people understanding what I say. People may have to pay more attention … and some people may have to acknowledge (that).”

The Rev. Dr. Anne Gatobu, pastor of the United Methodist Church in Ashland, Nebraska, and associate professor of pastoral counseling at Asbury Theological Seminary in Kentucky, said that African accents are some of the biggest challenges pastors from there face.

"There's a feeling that others may not be open enough to hear them," Gatobu said.

"It is uphill sometimes, because that depends on the congregation being open to hear," she added. "English is not necessarily a problem, it's the accents."

Both of the Koechs have become involved with their communities, and their children are participating in a whirlwind of activities.

“I love to get involved with the community activities. It is not only an ideal way to meet people, you can meet people in the middle of the week wherever they are. I want to be involved too,” Ezekiel said.

“They become open once they know you,” Alice added.

The Koechs keep in close contact with other African-born pastors in the Great Plains Conference. Many of them gather for an annual Thanksgiving dinner.

"Everyone in Africa becomes an aunt and an uncle," said Gatobu, a native of Nairobi. "I have lots of nieces and nephews, many of whom aren't even from my country. That comes from our African understanding of family being more extended than in the West."

Likewise, she said, definitions of friendship are different in the continents.

"Friendships are a big challenge, being able to have a true and trusting friendships across culture," Gatobu said. "The whole idea of friendship in the West is very individualized, in terms of 'What can I get from my friendship with you?' whereas the African friendship is 'No matter what, you are there for the other person.'"

"Community means everything, really," she said. "In the West, we talk about 'community' which is coming together for an event or something like that. But our wider community is so different. Everything is seen through the world view of community."

Besides a cultural exchange, there’s also been a food exchange for the couple. They have introduced their congregations to a type of African fried bread, and Ezekiel said he has taken to lasagna -- “I realized it is so rich, I added a few pounds after I started eating it.”

Both Ezekiel and Alice have introduced new programs to their congregations in Kansas.

He noticed that those attending the early and late services didn’t really know each other, so he began the “Trinity Bistro” between services, where they can all gather for coffee, as well as quarterly all-church potlucks.

She has introduced an apprentice program for the youth group she advises in Hays to help young people learn about the ministry. She also wants to break from the tradition of the youth group taking the summer off, introducing a “Bibles and Barbecue” session during the school break.
Both the Hays and Russell congregations have welcomed the Koechs with open arms.

Duane Adams served on the Staff Parish Relations Committee in the Russell church when it was announced that Ezekiel Koech would be its pastor.
Word did not get to the church, however, that its new minister was from Africa.

“It was a total surprise for us, but everybody seemed to be really excited about him,” Adams said. “It’s been almost a year now, and I haven’t heard one negative thing yet.”

The same is the case for Alice in her new congregation in Hays.

"None at all, zero," said Shirley Adams, chair of the board of trustees at First United Methodist.

"We've heard a lot of positive. I personally have heard no negatives," Adams added.

Bishop Jones said the Great Plains Conference is pleased with its roster of African-born pastors.

“I don’t see the trend ending,” he said. “We are open to that in the Great Plains.”

Jim Akins, Hays District superintendent, said the Koechs are two of three African-born pastors in his district – the third is in the Rev. Duncan Ibuuri in Sharon Springs.

“They bring a depth of spirituality, and all of them are very good at pastoral care, which for many smaller churches is really what they need,” Akins said. “For many of them it’s been a blessing.”

The biggest reservation that congregations have, Akins said, is being able to understand their new pastors.

“I think if some folks work as hard at listening as some pastors work to communicate, we wouldn’t have any problems at all,” he said.

Alice Koech said that, indeed, the African pastors work to make themselves understood.

“We lived here in the U.S. for almost 18 years, and we had taken courses in cross-cultural awareness,” she said. “Some of the things that would have caused me to concern how people would perceive me. Part of it is not on me; it is on them. There are some things that you can change and some things you can’t. One of the things I cannot change is my accent.”

She grew up learning both English and Swahili, and like many ministers uses her own life experiences when delivering her sermon.

Alice said she especially pictures her home village in Kenya during the parable of the Prodigal Son, with the father looking down the long road and celebrating his child’s return with fine clothing and shoes.

“I see the dad looking for the son every day, down a long road something like my village,” she said. “I didn’t have shoes growing up. I can understand what it means to not have shoes and walk on a gravel road.”

Communications coordinator David Burke can be contacted at dburke@greatplainsumc.org.