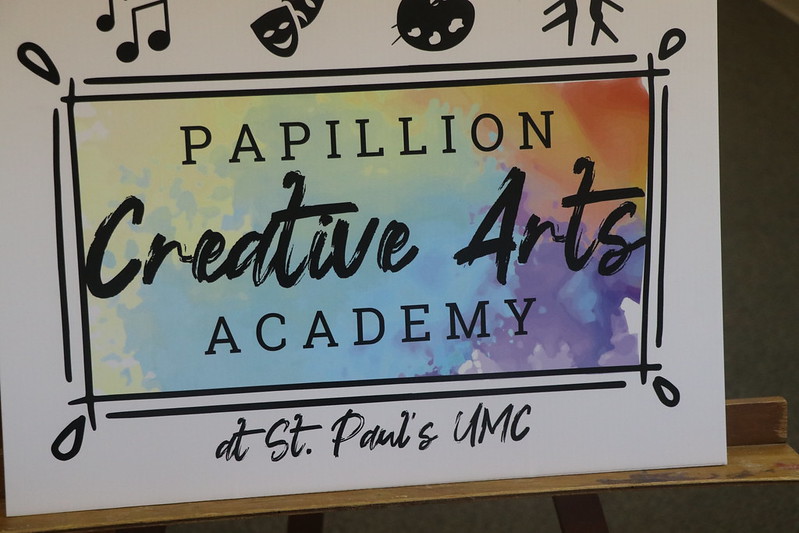 For an hour, the sanctuary at St. Paul’s United Methodist Church in Papillion turned into an art gallery, photo display, theater and comedy club.

It was the culmination of the first semester of the Papillion Creative Arts Academy at St. Paul’s UMC, where children and youth from preschool through middle school showed off their newfound talents.

“It’s a beautiful expression of the gifts that God gifts us,” the Rev. Amy Lippoldt, senior pastor, said before the Oct. 25 performances.

The academy came as a solution to St. Paul’s afterschool program, which had dwindled to four students.

Lippoldt was inspired by a book by a priest at London’s St. Martin-in-the-Fields, whose church had focused on arts education.

Knowing that the Rev. Rebecca Hjelle, associate pastor of faith formation, had an undergraduate degree in theater education, they began to brainstorm how the arts would further fit into the church.

“There’s a long history of supporting the arts and music here at St. Paul’s,” she said. “I always tell them they punch above their weight in terms of musical expression in worship and the talent level we have.

“We have so many people who love theater and are interested in theater, a lot of kids who are in show choir and things like that,” Lippoldt added. “It fits in with what some of our passions are anyway.”

Twenty-five students were a part of the first 10-week semester of classes, during two one-hour sessions each Tuesday evening. Six classes were offered, taught by members of the church or those known by the six-person advisory board.

Among those teachers was Liz Polivka, who saw six photography students develop during the 10 weeks.

“One of the biggest things I saw is their focus, both how they did in class and their photography as a whole,” said Polivka, an elementary school teacher.

One of those students was 13-year-old Izzy Goracke, who had some experience in photography through 4-H but got to hone her skills.

“I learned lots of different things – how to make a picture look professional, and editing,” she said. “The program is wonderful. I’ve learned a lot. Miss Liz is really great, but the whole experience of learning it is great.”

Art displays and photo displays were on the walls of the sanctuary, with each student at the ready to explain the work and how they accomplished it.

Performing on the chancel were preschoolers and kindergarteners in the music and movement class; a “Page to Stage” class with a sketch called “The True Story of the Three Little Pigs”; a liturgical dance presentation; and improvisational acting students playing improv games similar to the TV series “Whose Line is it Anyway.”

Hjelle, who has been at St. Paul’s for 2 ½ years, directed the “Page to Stage” and improv classes. She said being director of the academy felt like an opportunity to return to her theater education roots.

“It’s a safe space for kids, and kids are celebrated for being who they are, the way they are,” she said.

The academy isn’t designed to bring young people from the community into church, Hjelle and Lippoldt said, but both said families told them it was a deciding factor in where they would attend.

“The goal is for kids to have arts experiences in their community,” Hjelle said. “There was a void for some of these different creative arts.”

Hjelle said she has seen a transformation in her students during their time in her classes.

“Besides giving them an art experience, just helping them have more of those positive relationships with their peers and adults I think is just critical,” Hjelle added. “Our kids are pulled and pushed in a hundred different directions and giving them a safe space every Tuesday night where they’re going to feel encouraged by their peers and adults. It’s an honor to get to do something like that.”

The classes are $100 for one or $150 for two for the semester, with scholarships available.

The next semester this spring will expand to eight classes, adding culinary arts and filmmaking, the latter aimed at eighth-graders and high school students.

“We’ve got space and we can keep exploring,” she said. “I want this program to have that same sort of openness so we can meet young people where they’re at.”

Although Lippoldt did quote part of Psalm 19 in her introduction to the night, she said there was “no explicit Christian content” in the material.

“For me the motivation is definitely faith-based,” she said. “Our motivation is that the gifts we have for creative expression come from God.”