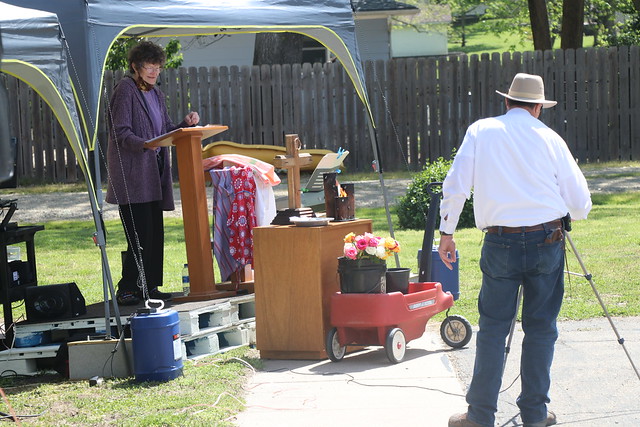 Revs. Sandy and Bruce Ferguson were already no slouches when it came to Sunday mornings.

They’ve been pastors of the Leonardville, Swede Creek, Randolph and Fancy Creek Zion UMCs in northern Riley County, Kansas – called the Jerusalem Road Parish – since 2014 and added the two-church charge in Keats-Riley in December.

Each Sunday meant three services in three locations, with churches alternating between the two married pastors each week.

A few weeks into the pandemic, they determined the best alternative would be a parking lot service, where worshippers from all six churches were invited to the Leonardville UMC – centrally located, across the street from their parsonage and the only church with reliable internet – beginning March 29.

But don’t think having one service made it easier for the clergy couple.

“It’s about as much work for both of us to do one worship service with all that as it took each of us to do three worship services across the north part of this county,” said Bruce, who with his wife prepares for the 10:30 a.m. service beginning between 8 and 8:30 each Sunday morning.

At the service on Mother’s Day, 30 cars crowded into the parking lot. Since they were good Methodists, the back row was full. Attendance was 53. The highest attendance so far has been 63, they said. Combined with the number of views on Facebook Live, more people were watching it in person or online than normally attend all six churches, Bruce and Sandy said.

The Fergusons, who had to cancel church the first weekend of gathering restrictions while they were at a family reunion in Arizona, had briefly considered only livestreaming the services.

The only exception was Easter Sunday, when questionable weather forced the services inside for livestream only. A few parishioners did show up, the Fergusons said, but without going over the attendance limits.

Sandy was initially apprehensive about streaming because she didn’t like the way she looked on video, but realized she was providing a ministry to her churches.

“To be able to offer worship services both live and online for all their needs, or as many needs as we possibly can, that’s very rewarding to us personally,” she said.

With bits and pieces of electronic equipment from all six of the churches and his own collection, Bruce was able to patch together a sound system that was good for Facebook Live, and loudspeakers and a low-power FM radio signal for those attending live.

Two popup tents used by the Randolph church for their Fourth of July ice cream social were used. The pastors and lectern were atop two layers of wooden pallets.

Barbara Lee, organist for the Leonardville church, played portable keyboards for the Mother’s Day service, which included a men’s chorus.

Lee, who was in quarantine for two services after showing COVID-19 symptoms, said she enjoyed the new experience.

“It’s a good way to try it, so we can come together but not be together,” she said.

Pat and Annette Marden, who normally attend the Keats church, parked their SUV in the front row as they were celebrating not only Mother’s Day, but their 50th wedding anniversary.

“They’ve gone to a lot of work to try and do this,” said Pat, retired from construction.

“I enjoy the outside and the things that come with it,” said Annette, a hairdresser whose job is on hold. “You’re surrounded with nature.”

Ushers greet the cars as they pull into the parking lot at the corner of US Highway 24 and Colorado Street, handing each a bulletin. Offering is taken by one usher going car to car, weighing down the collection plate with rocks. To commemorate the holiday, Sandy and two teenage girls take flowers to each mother and grandmother in the congregation on wheels.

“We are here al fresco, as it were, to dine on the glory of the Lord,” Bruce said in his opening prayer.

Sandy’s Mother’s Day sermon allowed her to share her collection of aprons and the memories of family and maternal figures in her life.

To show their thanks, those in the live congregation honk their horns for the Mardens’ anniversary and the men’s group’s Gospel medley.

“Can you imagine Methodists doing anything akin to honking their horns while sitting in a sanctuary?” Bruce asked the next day. “This is amazing. It’s almost like Baptists yelling ‘Amen!’ and ‘Hallelujah!’”

Both of the Fergusons say the livestream and parking lot church has brought them and their congregations new excitement.

“There’s a genuine sense of joy in them that doesn’t often show up in a sanctuary, because you’re supposed to show up and be very, very proper,” he said.

The Fergusons don’t want that joy and excitement to fade once social distancing and crowd restrictions are over.

“How do we not just go back to average sanctuary afterwards?” Bruce asked. “There’s a feeling in the people I’ve talked to of, ‘Yeah, we want to keep that spontaneity, that feeling of something that is different this way.’ We’re working on it.”

The couple has considered monthly evening services outdoors, knowing that city parks are not far away from most of their six churches, and livestream from at least one of the churches a week, knowing they would need some technical support.

“It really takes both of us to do this service, and they only have one of us in services at a time,” Bruce said.

The Jerusalem Road Parish council is scheduled to meet the week after Mother’s Day, where Bruce said the main topic will be continuing the spirit and the energy of the parking lot services.

“We’re seriously going to ask the question, ‘How much are you going to trust us to do something new?’” Bruce said. “This is a good thing that has come out of this that has been just too precious to lose.”