Participants kick up their boots at fifth-annual OneEvent

On the first weekend of January, “yee-haws” joined with “amens” at the Tony’s Pizza Events Center in Salina.

The fifth-annual The OneEvent, a gathering of nearly 1,000 junior-high and high school-age youth, had a Western theme. Organizers wore cowboy hats and shirts or prairie dresses. A wagon wheel and hay bales decorated the stage. A conestoga wagon sat in the lobby for group pictures.

In the arena of the events center, formerly known as the Bicentennial Center, participants saw:

From the first minutes of the 23-hour event, participants were urged to yell “yee-haw!” rather than “amen” when they heard something that resonated with them.

Participants also sampled hands-on activities, including dividing 42,000 pounds of potatoes to take back to food pantries and distribution centers in their hometowns; making care packages for emergency responders; and packing United Methodist Committee on Relief hygiene kits for distribution after disasters.

Saturday night, Jan. 6, was capped off with a dance led by Al Cherry and an acoustic concert by Zachariah Kirkham. Unofficial activities continued into the night at the host hotel.

When not busy with the rest of the events, youth enjoyed time in the exhibit hall, including riding a mechanical bull, playing gaga ball and nine-square, creating their own artwork, shooting basketball at inflatable hoops, and visiting booths telling about college ministries and camps in the Great Plains.

“It’s very fun. I would like to come back here again next year,” Johnson said.

The speakers and information had an impact on both girls.

“It made me see that being a Christian is more than praying every night and reading the Bible and going to church,” Johnson said. “It’s about loving Him truly.”

“It’s how you open your hands to other people,” Creekmore said. “Showing other people the true meaning of Christ, and how you follow God.”

Jeremiah Ecker, a sophomore at Hesston High School in Kansas, was at his second OneEvent and “thoroughly enjoys” the experience, especially the music.

“While you get the same air listening to a CD of praise and worship music, listening in person is just a whole other experience,” he said. “It gets you in that feeling where you’re singing your heart out, pouring your heart out to God and Jesus.”

The message also made a difference to Ecker, who attends First United Methodist Church in Hesston.

“It’s the burden that Christ paid for us, and how massive that burden is,” he said. “It’s just inconceivable that burden, that love which He has for us.”

Zackerie Ledford, youth ministries intern and former member of the Conference Council on Youth Ministries, said The OneEvent was a success, especially after the 2017 edition, when icy winter storms prevented most of those registered from attending.

“It’s been a great year overall,” he said. “Everybody’s having a good time, and the speakers are really engaging. We’ve got volunteers willing to help wherever they’re needed.”
Michael Salgado, a first-time OneEvent attendee, said he wasn’t sure what to expect but was pleasantly surprised.

“I was expecting more like a traditional church thing, and this is more mainstream and youth-oriented than I thought it’d be,” said Salgado, who attends Papillion-LaVista High School in Nebraska and attends Faith-Westwood UMC in Omaha.

“These church events aren’t as serious as some people think they are,” he added. “You learn a lot of things in a lot of different ways.” 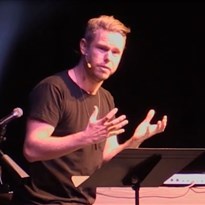