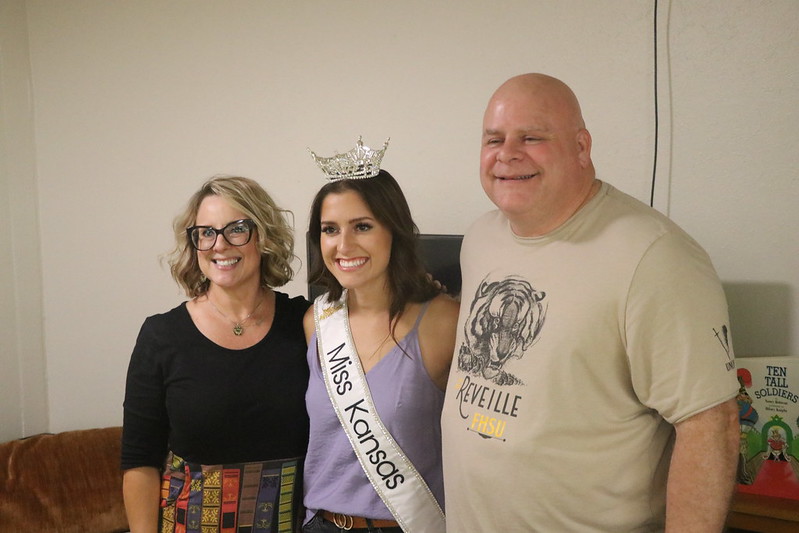 FHSU’s United Methodist Campus Ministries was looking for students with a reason to enter its building.

Both of those needs are being met with a marriage of the two, stoked by the marriage of their leaders. Dr. Sarah Broman Miller is assistant professor of teacher education and director of the institute, and Troy Miller is campus pastor at Fort Hays State.

“My basic strategy, if you will, for outreach, evangelism, church growth, whatever, is the more comfortable I can get them in the building, the more I can connect with them personally, the greater opportunity I have to build relationships with them,” said Troy Miller, who has been campus pastor since October 2021. “And then when they need something of a spiritual nature, hopefully I’m on their radar to seek out.”

The combined forces made their debut at the first of monthly Family Literacy Nights on Sept. 15.

Featured at the first night was Miss Kansas Ayanna Hensley, a spring 2022 FHSU graduate who spoke to an audience about her childhood struggles, including drug-addicted parents with a father who initially denied paternity. Hensley’s life was changed, she said, by a second-grade teacher who gave her self-worth and a business card with her home phone number and a promise she would answer a call.

“It was miniscule of her to do that,” Hensley said, “but honestly it changed the trajectory of my life.”

Broman Miller said it was important for the education majors that she oversees to see that a teacher can make a difference in children’s lives.

The night also included literacy-themed games and crafts for children.

Miller roamed through the crowd, introducing himself to families and children and telling them funny stories from his life, including his marriage to Broman Miller on Alcatraz Island in 2019.

“Now the kids know me a little bit. I can walk around there and tell them thanks for being there and that I appreciate them,” he said. “With just that small relationship building with at least a few, we’ll continue to grow from there.”

Miller — a licensed local pastor who serves half-time at the campus center and half-time as director of congregational and community care for Hays First UMC — was pleased that 100 people attended, despite a severe thunderstorm warning at the beginning of the event.

He said he had been searching for a way to connect to the student body at FHSU, and the most likely way was through his wife’s education students.

“It spreads to other areas but starts with them. Maybe we can reach a student body through a focused mission that gives them a reason to come into the building in the first place,” Miller said. “It was a cloudy vision to start, but the intention of our heart was clear. We’ve got little kids that need tutoring, we’ve got college kids that have to tutor. They need a place; I’ve got a place. And my place just happens to be a place of spiritual growth and development for students.”

Broman Miller said 50 FHSU students, each with at least one student they’re tutoring, will be using the campus center this semester.

Her husband said he wanted to create a welcoming atmosphere for the tutoring.

“If I get 40 kids a semester coming in and 10 of them say, ‘Hey, what else do you do here?’ and two of them decide to follow Jesus with a connection to the campus center, we’ve accomplished our goal,” he said.

“Our big vision is to provide tutoring and language and literacy because that’s a needed thing for a community. But the mission of the campus center is, let’s use that mission to minister to the student body,” Miller added. “That’s our model, that we’re making up on the fly.”

The Millers say a growing number of Hispanic refugees — an estimated 2,000 in Hays, population 21,000 — who cannot speak English is causing the need for more tutors.

“Reading is the best place,” Broman Miller said, “reading and language are hand-in-hand.”

Working with the immigrants is good for both them and the college students, she said, including interaction at planned weekly dinners.

“What’s so beautiful about the whole thing is that you’re getting kids, as far as the campus center goes, teacher education students … plus their friends into the building, and they’re going to start coming on Thursday nights to have dinners, and the dinners will be shared with the Hispanic families coming for English lessons,” she said. “There’s conversation, which is wonderful.

“It’s so beautiful because these students, who have never really left Kansas, have no idea what diversity is and are from small, rural towns,” Broman Miller continued. “Now they’re having the opportunity to meet people different than them and maybe kind of chip away at these stereotypes that they’ve heard. And basically, they get to meet Jesus through all of it.”

Broman Miller said the Language and Literacy Institute, now in its ninth year, had moved from school to school and most recently was set up in the commons area of a university building.

“We haven’t had a place to go,” she said. “I was seeing so many kids in the community who needed help, and if we weren’t at their school, then maybe they weren’t getting the help.”

Last year, Broman Miller began a drive to collect books through United Methodist churches in Kansas to distribute to correctional facilities. That has led to a partnership with the Kansas Department of Corrections, beginning with a pilot program at Topeka Correctional Facility and eventually going to all seven state prisons, where the female inmates and their children would receive tutoring.

“It’s almost like we get the whole family. My students really want to be a part of it. It’s giving them a purpose,” Broman Miller said. “They’re seeing this just isn’t about teaching — of course that’s the primary goal — but they’re finding so much more. These are human beings you’re teaching, who could end up at Topeka Correctional one day if they don’t learn how to read.”

“The potential for this is huge,” Troy Miller said. “We don’t know where all the funding or everything is coming from, but we just want to take it one step at a time. But it seems with every step we’re taking another step is lighting up pretty quick.”

“It’s starting to pick up momentum quicker than we imagined,” he added.

“We’re kind of building the airplane while it’s in the air,” Broman Miller said.

“Or fashioning a parachute as we’re on our way down,” Miller quipped.

The Millers said they hoped the newfound partnership between the literacy center and the campus center would bring students to Christ through examples.

“We don’t have to sit here and evangelize to other kids. They see it through the love we have for other people and the things we’re doing for other people,” Broman Miller said. “They might not get behind someone who’s making them come to Bible study every Monday night. That’s not how you get them. You get them by saying this is what we’re doing. To me, this speaks louder than any study.”

“I’m working within that Wesley tradition of trying to build up community and bring people into the faith,” her husband added, “through serving and helping.”