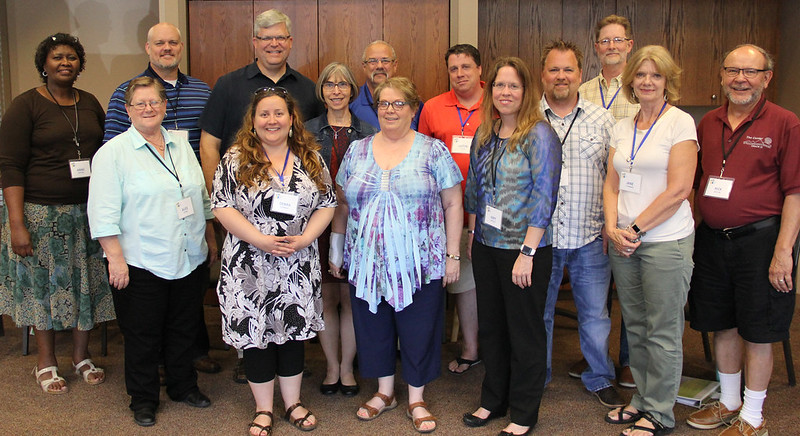 Those names may be familiar to college sports fans in Nebraska and Kansas. The list may evoke images of successful coaches walking along sidelines of college football fields, volleyball and basketball gyms and softball diamonds. In each case the people mentioned – and others like them – have inspired men and women to break through barriers to performance so they could be the best they could be at their craft.

Coaching isn’t limited to athletics, however. Clergy and congregations also benefit when a coach helps tap into creativity and helps boosts performance, said George Howard, executive director for global coaching with the General Board of Global Ministries. Twenty people gathered June 26-30 in Lincoln to train to coach peers and local-church groups. Of that mixture of United Methodists, Lutherans and Presbyterians, 15 pastors from Kansas and Nebraska took part specifically to help elevate the performance of clergy and congregations in the Great Plains Conference.

The Rev. Nancy Lambert, Great Plains Conference director of clergy excellence, said the conference wanted to develop coaches who will be skilled in working with peers.

“With our conference’s growing expectation of clergy helping one another and the collegiality and connection between clergy, all of the people being trained here understand our context – our history, our challenges and even our wide-open spaces,” Lambert said. “It’s not that any of that is necessary to be a good coach, but it seems to be an asset.”

The group received training from Howard and the Rev. Chris Holmes of Holmes Coaching Group. Holmes, a former district superintendent in the Baltimore-Washington Conference, said in materials distributed prior to the sessions in Lincoln that many peer-to-peer interactions fall into the categories of mentoring or consulting. Coaching is different because it focuses less on sharing an expert’s opinions or experiences and instead allows for listening and questions to tap into a person’s self-awareness to solve problems, cast new vision and move beyond the status quo.

“Most clergy are drowning right now with the tyranny of the urgent,” Holmes said. “It’s hard to get to the transformational things for our churches without someone to help us do that work.”

He said coaching is not typically used to address performance-related problems but rather to help clergy and churches break through barriers that prevent them from becoming more vital in today’s context of ministry. And the skills learned in a coach training session are not taught in seminaries.

“In the world according to me, there are 15 percent of pastors who get it and who would be successful no matter where they are,” Holmes said. “There is another 15 percent at the bottom who are just beaten down and angry. In the middle are lots of pastors who truly want to do the God-sized things needed to change the culture in our churches but can’t do that on their own.”

That’s where coaches come into the picture. Much like a coach on the athletic field observes and helps a skilled player become better by tapping into their God-given abilities, a coach for clergy and congregations helps people he or she works with realize their God-given gifts and how to put those graces to work for the betterment of the mission of the church.

“Mentors generally are or have been where a person wants to go, therefore they share their experience on how they got there and how the person can get there,” Howard said. “Coaching is different in that I can coach a pastor or a roofer. I don’t have to know everything. I come alongside someone to help them understand what they need to do to accomplish what they want.”
Coaches listen, ask a lot of questions and help people they work with sort through their own thoughts.

People who go through this kind of training usually seek to receive International Coach Federation (ICF) certification. The organization promotes that its focus is on identifying opportunities for development based on individuals’ strengths and capabilities. It has members in more than 100 countries working in myriad industries and organizations.

Lambert said participants read a book and took part in exercises prior to the on-site training and now have follow-up conference calls for a couple of hours at a time over several weeks to complete the training. The conference paid for the training for the 15 pastors from the Great Plains. In return the pastors each agree to provide 70 hours of coaching without payment before moving to a uniform pay schedule for coaching they provide. To receive ICF certification, each coach must have 100 hours of coaching experience, receive feedback from a mentor coach and complete an exam.

Holmes said he has seen coaching help churches break cycles of decline. While serving as a DS in the Baltimore-Washington Conference, he said he coached 32 pastors. He noted the conference had witnessed approximately 40 years of decline, but after six years of having a coaching program in place, the conference started seeing results, with four of eight districts reporting growth in worship attendance, professions of faith, baptisms and giving.

“Really what happens is churches get a little healthier, and clergy get a little clearer on identifying the God-sized things that needed to happen for our churches,” Holmes said.

Great Plains Conference participants in the Lincoln training said they believe coaching can help in a number of ministry areas.

The Rev. Nathan Stanton, director of congregational excellence and one of the pastors who trained in Lincoln, said a coach or coaches could help with new-church starts to assist help pastors and their leadership teams set goals and become self-sustaining. Coaching also has positive ramifications for established congregations.

“I see this kind of coaching as a way to strengthen those who are motivated,” Stanton said. “For some, this could be a real catalyst for growth in their leadership and, through that process, their witness.”

The Rev. Amy Lippoldt, chair of the conference Board of Ordained Ministry who also was trained in Lincoln, said coaching could be one development tool used to help people with their process toward ordination, “especially for people who feel stuck.”

She said the coaching model fits well with the duties assigned to the board.

“What I love about this approach is that it is focused on the resources inside the person,” Lippoldt said. “The responsibility for development is inside each person with someone helping them reach their full potential.”

Howard, who took vacation time from GBGM to assist with the training in Lincoln “because I enjoy it so much,” said he sees coaching as means of pastors helping each other.

“One thing I observed when I was director of congregational development in Ohio is that pastors often see themselves as isolated and alone,” Howard said. “How can we be a connectional church and be isolated? I see that as a sin! Coaching allows us to help each other.”

The peer-to-peer coaching model fits into the conference’s strategy of networks of clergy helping each other bolster ministry in the many contexts across the Great Plains, Lambert said.

“I hope lay people will understand that providing coaching is an attempt to have healthier clergy and, therefore, healthier churches by investing in clergy so they can be more effective,” she said.

Holmes said the shift toward coaching is, perhaps, the fastest-growing movement in the denomination. He noted that he thought the participants in the Lincoln training sessions would be prepared to fulfill the goal of providing coaching to help elevate the performance of clergy and local congregations.

Said Holmes: “My hope for them is that in this process (the Great Plains Conference) will have a clear vision for how to effectively use the modality of coaching to help clergy be the best they can be so churches can be what we need them to be.”