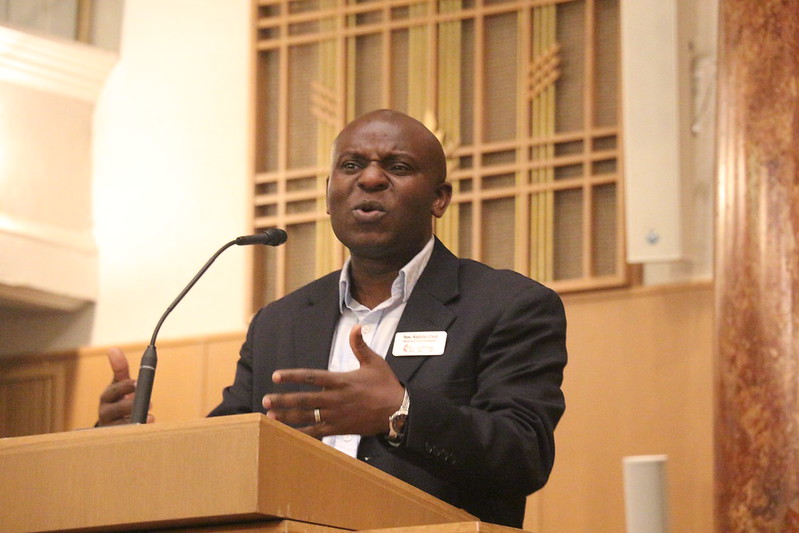 Discussions and testimonials regarding gender, race, poverty and the environment were the focus of an event dubbed “For the Transformation of the World” Oct. 29 at First United Methodist Church in Lincoln.

A panel discussion about poverty highlighted the morning events, while the remainder were discussed in several workshops.

The event was presented by the Mercy and Justice team of the Great Plains Conference.

“You are truly friends of justice,” the Rev. Susan Henry-Crowe, general secretary of the General Board of Church & Society, told the 60 participants. “I think you all should teach other annual conferences how to do this.”

In a talk preceding a morning panel discussion, Henry-Crowe said that the root causes of poverty have to be confronted.

“Racial and economic unrest has to be addressed and eradicated,” she said.

Henry-Crowe was joined on the panel by the Rev. Mark Holland, pastor of Trinity UMC in Kansas City, Kansas, as well as the mayor of the nearly 150,000-person city; and the Rev. Charlotte Abram, a retired United Methodist pastor active in social issues in Omaha.

Holland gave a history of Kansas City, Kansas, including both its steep decline in population and sharp upturn in poverty levels and crime.
“We have pretty acute poverty in our city,” he said.

Alongside the increase in poverty comes a decrease in mental health services, he said. He called it a “chicken-and-the-egg” conundrum that worsens the situation.

“The scope of it is so overwhelming,” Holland said.

“We have an obligation as a people, as a community, to address the root causes of poverty,” he added. “Our role goes from direct service to advocacy.”
Abram said that churches need to be at the forefront of the fight against poverty.

“We can prayerfully stand up and stand with,” she said, “but also speak up and speak out.”

She refuted the counter to the Black Lives Matter protest by those saying that “All Lives Matter.”

“Historically, ‘all’ has not meant ‘all’ in this country,” she said.

Henry-Crowe said six factors gauge the levels of poverty: education, fair wages, family planning, water, housing and access to goods and services.
All of the panelists agreed that race is a factor in poverty.

“We need to lead the conversation that racism is real,” Holland said. “We are fools not to address it head-on.”

Henry-Crowe said that The United Methodist Church has a long history in fighting poverty, back to John Wesley’s call for a “decriminalization” of poverty.
“It’s in our DNA,” Henry-Crowe said.

Afternoon workshops included talk about healthy families, by Gina Gile, pastor of Dakota City-Homer UMCs in Nebraska, and Pauline Muchina, director of the Healthy Families/Healthy Planet initiative by the General Board of Church and Society; race, led by Glory Kathurima, a member of the Norfolk, Nebraska, UMC; environment, led by Bonnie McCord, an ordained elder with the Chadron, Nebraska, UMC; and gender relations, led via Skype by Margi Ault-Duell, a longtime social justice educator who grew up in Kansas.

The Rev. Kalaba Chali, mercy and justice coordinator for the Great Plains Conference, said in closing that participants were on the road to do the right thing.

“You do care,” Chali said. “You do want to walk humbly with God.”

Participants said they were encouraged by the panel discussion and the workshops.

“It was good to worship and reconnect with people working on common causes,” said the Rev. Sherry Sklenar, pastor of Pawnee City-Burchard-DuBois, Nebraska, UMCs.

“We absolutely loved the workshops,” said Wendy Kabler of Wichita, attending with her husband, Craig, as part of a delegation from Aldersgate UMC.  “All the information that we learned and connections that we made were invaluable.”

“The environment workshop was incredible,” Craig Kabler added. “It was just enjoyable, with lots to learn. I’d do it again.”

The Kablers said the social justice team at Aldersgate would meet soon to map out its vision for 2017.

“This is another resource given to us,” Craig Kabler said.

The Rev. Sarah Marsh, of the Lawrence, Kansas-based Justice Matters and chairperson of the conference, said she was encouraged by the enthusiasm of the participants.

“We talked about systemic issues, we talked about problems in dealing with poverty in the community and we had a lot of great energy about the topics,” she said.