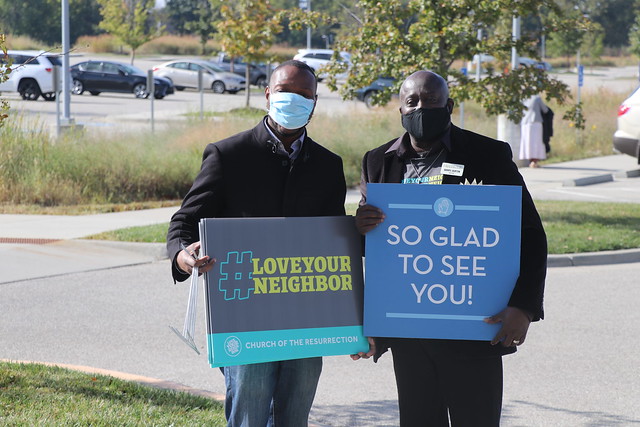 Services at United Methodist Church of the Resurrection the first Sunday of October warranted a triple celebration.

It was the first onsite Sunday services at the Leawood church since the onset of the coronavirus pandemic. It was also the 30th anniversary of the first services at Resurrection, which has become the highest-attended church in the denomination. And it was a kickoff of a “Love Your Neighbor” campaign to confront the hostilities brought on by the 2020 political climate.

Two services were conducted on Oct. 4, with numerous precautions in place. Congregants had to sit in alternating rows — different rows for each service — and keep at least three seats away from other parties. Many of the ushers wore gloves, and all attendees had to wear masks. Surfaces including railings and doors were frequently sanitized.

“We care about you, and we want you to be safe,” the Rev. Adam Hamilton, the church’s founding pastor, said at the beginning of the 11 a.m. service. “We want it to be safer to go to church than the grocery store.”

As many as 20% of the 3,500-seat sanctuary could be filled, and Hamilton said the attendance was a few hundred people short of the adjusted capacity. Hamilton said there was no pressure in attending the onsite service, and online services were still going strong as well as a twice-Sunday morning showing on a Kansas City TV station.

The church has done more outside ministries in seven months, Hamilton said, than in any other year in its history, “all while the door was locked.” 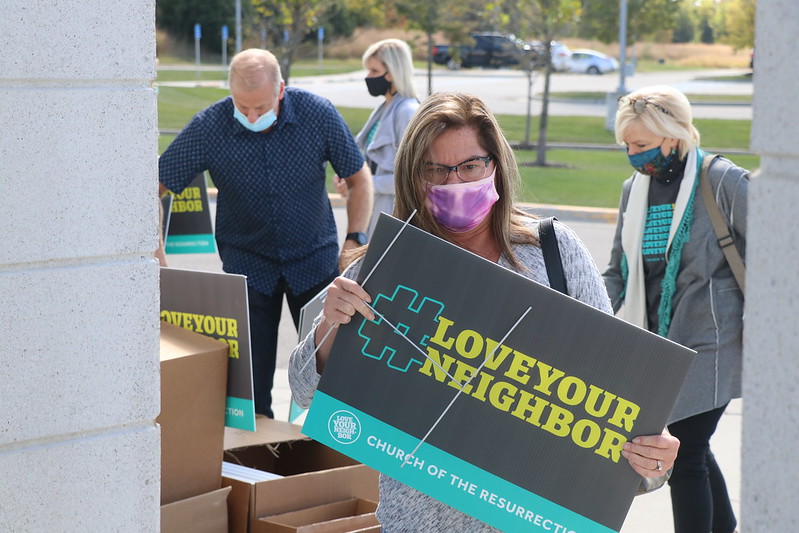 Church of the Resurrection is making "Love Your Neighbor" materials -- including graphics for yard signs, banners, T-shirts and cards, customizable for local churches -- available for free through its ShareChurch website: sharechurch.com/resource/love-your-neighbor-resources/

Note: Watch for a special “In Layman’s Terms” podcast on the conference website later in October with Rev. Adam Hamilton sharing how Church of the Resurrection got its start and its vision for the next 10 years.

That, said Dan Entwistle, senior executive director of the church, included a COVID-19 mission response fund of more than $310,000; donations of masks and sanitizer; hospital worker and teacher encouragement campaigns; providing meals to the community; and working with local YMCAs to create Learning Academies.

The Rev. Wendy Lyons Chrostek, senior director of congregational care, read the Scripture, led a congregational prayer and reminded those attending that the last time they worshipped in person, she was nine months pregnant — and now has a 6-month-old baby.

“In the midst of it all, in the midst of everything we‘ve been experiencing, there’s one constant — and that’s God,” she said in her prayer.

Parishioners were glad to return to Resurrection as well.

“I’m so happy to be here and see people,” Barbara Murphy, a regular 11 a.m. attendee, said. “You just feel more closer to God when you’re in the sanctuary. You’re able to be there with other like-minded people rather than staying home by yourself.”

To begin the anniversary celebration, Hamilton asked those worshipping who were among the first attendees, initially in a funeral home and later at an elementary school.

“You have been foundational,” he said. “This church wouldn’t be the same without you.”

The service included the same hymns – “Holy, Holy, Holy,” “Christ the Lord is Risen Today” and “Amazing Grace” — as well as the same special music, “Through It All” — as the first services on Oct. 7, 1990.

A video of Hamilton and his wife LaVon touring McGilley Chapel funeral home began the sermon, where they reminisced about the first service.

“We thought we had a guaranteed 30 people,” LaVon said.

“There was a sense God was going to do something amazing with this congregation,” her husband added in the video.

Those few attendees three decades ago have grown to 23,500 today, Hamilton said. The church has had 30,000 professions of faith and 8,700 baptisms. In mid-September of this year, he said, Resurrection set a record with 502 new members joining the church.

“Our dream was going to be that Kansas City would look more like the Kingdom of God because we were here,” Hamilton said.

Rather than a big celebration for the anniversary, Hamilton said, Resurrection is using it to kick off a “Love Your Neighbor” campaign.

Politics have left friends, families and neighbors “polarized,” he said, and Resurrection was going to counter the political yard signs with similar-sized placards that say “Love Your Neighbor” and “God is Love.”

“I promise you in two weeks they’ll be on every corner,” Hamilton said. “We’re gonna say, ‘Vote for love.’”

Those attending were invited to pick up yard signs and similarly themed T-shirts — with the phrase “Love Your Neighbor” seven times, one of every day of the week — following the service.

John and Charlita Washburn drive weekly from Grandview, Missouri, to Leawood for church services. Charlita said she’s been asked by friends if they feel like they “don’t belong” because they’re working class, have a rundown car and live far from the upper-class suburb of Leawood.

“You feel included,” she said. “I’ve never felt like I didn’t belong.”

Although the couple had attended Tuesday night Vesper services occasionally over the past few months, they were happy to be back in Sunday worship.

“There’s nothing better than walking in there and seeing Jesus looking down on you” from the church’s signature 100-by-40 foot stained glass window, Charlita Washburn said. “You just feel like you’re home.”