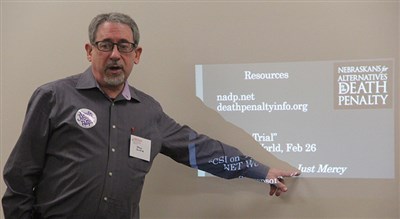 A retired Nebraska United Methodist pastor is no longer the head of an organization opposing the death penalty. But that doesn’t mean the Rev. Stephen Griffith is giving up on the cause.

Nebraska is scheduled to execute its first Death Row inmate in 21 years at 10 a.m. Tuesday, Aug. 14. Carey Dean Moore received the death sentence in 1980, after convictions in the murders of two cab drivers in Omaha in 1979.

“Mr. Moore has decided not to oppose his execution,” said Griffith, who served two years as executive director of Nebraskans for Alternatives to the Death Penalty before resigning last year. “He has asked his people, his spiritual advisers and those in touch with him, such as his legal counsel … not to do anything further to oppose his execution.”

Therefore, Griffith says, there will be no vigils or watches outside the Nebraska State Penitentiary in Lincoln on the day of the execution.

“We’re doing our best to honor the intent and spirit of his wishes,” Griffith said.

There will, however, be a rally outside the Nebraska state capitol at 5 p.m. that day, in vocal opposition to the death penalty.

Nebraskans for Alternatives to the Death Penalty and Amnesty International have picketed outside the Nebraska governor’s mansion at noon daily to protest the execution – “silent witness, silent protest,” Griffith said.

Griffith said he hopes that the execution of Moore – one of a dozen inmates on Nebraska’s Death Row – is the last.

“There are many of us who are looking at a larger picture, not just a single execution,” he said.

The planned execution is the first in Nebraska to use lethal injection. Griffith, along with Nebraska State Sen. Ernie Chambers of Omaha, were plaintiffs in a lawsuit challenging the execution protocol for the combination of drugs being used in the execution. The suit was dismissed by a Lancaster County judge in June.

Danielle Conrad, executive director of the ACLU of Nebraska, told the Lincoln Journal Star that she was disappointed with the decision to dismiss the suit.

"We will confer with our clients to determine how to proceed and will actively explore all options, including an appeal to ensure the Nebraska death penalty protocols were adopted in accordance with the law," Conrad told the newspaper.