7/14/2016
The connectional ministries and missions vitality center leader for the Rio Texas Conference has been elected as a new bishop by delegates at the South Central Jurisdictional Conference in Wichita, Kansas.

Ruben Saenz Jr., who turns 55 Saturday, was elected on the third ballot Thursday morning by 133 of the 641 votes, comprised of an equal number of clergy and laity, with each delegate voting for three people on each ballot. He is the first of three new bishops to be elected in the jurisdiction.

His episcopal area assignment will be announced following the election of people to fill two other open bishop positions in the jurisdiction, which includes the states of Nebraska, Kansas, Missouri, Arkansas, Oklahoma, New Mexico, Texas and Louisiana.

"I offer myself and give myself to wherever the journey leads," he said in a news conference following his election.

Saenz said he didn’t set out to be an episcopal leader, but over the years, people have talked to him about the possibility of putting his gifts to use as a bishop.

“I think of it as drops in a sponge, he said. “The first 100 drops are insignificant but after a while, it gets heavy and saturated. It was the affirmation of many people I’ve been associated with over the years.

“It has been a long season of discernment.”

Saenz said he looks forward to serving wherever he is sent. He said he didn’t want to be elected just because he is Hispanic. He wanted to be elected because delegates discerned that he would serve well in his new role.

"I would rather be elected because I'd be an effective bishop who happens to be Hispanic," he said.

Saenz is considered to be the key point person to the bishop and the cabinet of the Rio Texas Conference, based in San Antonio, designing and implementing ministries to fulfill the conference’s mission. He serves in the role of director of connectional ministries and executive director of the Mission Vitality Center in Rio Texas.

A native of Rio Grande City, Texas, Saenz earned a bachelor’s of science degree in secondary education from Stephen F. Austin State University in Nacogdoches, Texas, and was a high school teacher and coach in Rio Grande City for six years until he began working full time at a small jewelry business that he and his wife started in 1984.

In 1993, they sold their business and moved to Dallas, where he began studies at the Perkins School of Theology at Southern Methodist University. When he earned his master’s of theology degree at Perkins, he was presented with the Perkins Faculty Award for the student who best exemplified the goals and mission of the school. In 2009, he received his doctor of ministry degree from Perkins.

In those congregations, he addressed the issues of generational, social and systemic poverty that plague the region. In El Paso, Saenz led the congregation to create and implement the Levantate – Get Up computer literacy program, targeting single mothers who were unemployed because of factory shutdowns so they could enter the job market at a sustainable wage level.

Saenz and his wife, Maye, have four children, Aaron (Iris), Christina (Matthew), Ruben III, and Isaac. Their first grandchild is due later this year. 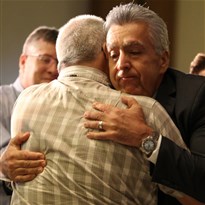