Saint Mark job fair helps those with criminal past

The search for a job can sometimes be difficult. It’s even more so when the job seeker has a criminal background.

Helping to bridge that gap is the prison ministry of Saint Mark United Methodist Church in Wichita, which conducted its fourth biennial Job Fair Expo on Oct. 27. 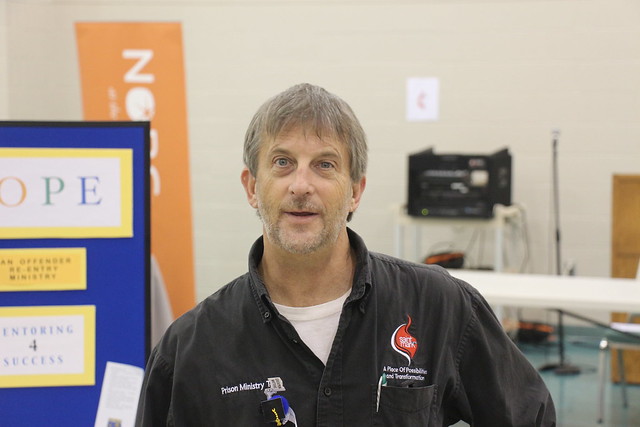 “They feel encouraged,” said David Wilkinson, a member of the prison ministry team since it began in 1999. “I think it plants a lot of seeds in people’s hearts.”

About 150 people attended the October job fair, which offered nine booths by community partners – with instructions on continued learning opportunities and community efforts – and 15 employers, representing temp agencies and a variety of potential jobs.

“A lot more employers are open to hiring formerly incarcerated people,” Wilkinson said, with the exception of those who work with children or are in people’s homes.

Some of the booths were from support agencies dealing with those with a criminal past.

“It’s easier when you see somebody who’s been there that you’re pulling for them, bringing them back to life and giving them the word of life,” said Rachel Cartmill of the Wichita-based Working Men of Christ.

Not everyone at the job fair had a criminal background. Ourlexis Wilson, a culinary arts student at Butler Community College, saw signs in the neighborhood and decided to see what was inside the Saint Mark Family Life Center.

“I’m just here looking for a job,” Wilson said. “This is a good opportunity.”