Salina churches work together to bolster youth groups and beyond 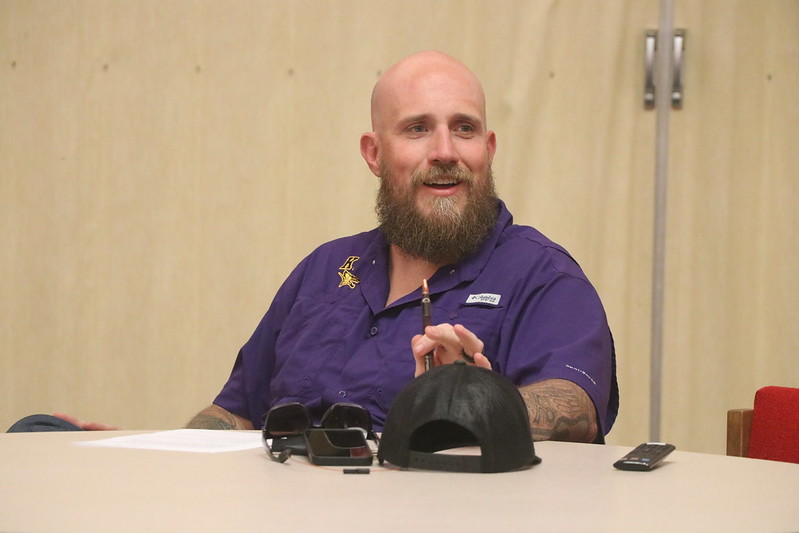 It’s just past 7 o’clock on a Wednesday night, and the Family Life Center at Salina Trinity United Methodist Church is filled with raucous laughter.

A dodgeball-type game called “Protect the President” is being played, with two people in the center of a circle made up of other youth.

Ask around a little bit, and you’ll find out the youth are from both Trinity and Salina University UMCs, and the college students are from Kansas Wesleyan University.

It’s not only a collaboration between the two church youth groups, but adds the Salina-based United Methodist college to the mix. And it’s laid the groundwork for further joint endeavors between the two central Kansas churches.

It started last fall when Nick Talbott, a licensed local pastor who’s been serving University since 2019, invited Rev. Eric Meyer, who began at Trinity in July 2021, for coffee.

“We found out we were two kind-of kindred spirits,” Talbott said. “Our coffee hour became our time to lament the challenges we were facing.”

The biggest lament was the dwindling size of their congregations, particularly their youth groups, which they blamed on COVID. Each of their churches averaged eight youth, most of whom were in middle school. And Trinity had recently lost its youth pastor.

“It’s hard to hold onto a youth pastor if you’ve got eight students,” Meyer said.

Their talk turned into a walk at the local forest preserve on a warm January day, and about halfway around the 3-mile loop they developed a plan to join their youth groups and have interns from Kansas Wesleyan serve as their leaders with guidance from the pastors.

Talbott, who has a history with church camps, suggested “summer camp every Wednesday night.”

Trinity had money in its budget to hire college interns from Kansas Wesleyan to lead the youth.

“They just knocked it out of the park,” Meyer said of the new group, attended by more than 30 youth a week. “They loved coming and hanging out with college students.”

A pilot program began in the spring with three KWU students, and that number has grown to 18, each of whom receive a $1,000 annual stipend.

“We have an open door, it’s a Methodist school, and that we can partner seamlessly makes so much sense. It’s a no-brainer,” said Chelsea Shrack, who was appointed as associate pastor of both churches in July after five years as campus pastor at K-State Wesley in Manhattan.

Shrack said she loved the concept of middle- and high-schoolers interacting with college students.

Cajun Holland, a fifth-year senior at Wesleyan and former member of the football team, leads the college students.

Holland said working with the students “puts me in a place where I feel like Salina is part of my home.”

The Los Angeles native said working with the youth has reinforced his calling.

“I really want to go into youth ministry, and this has given me an opportunity to explore that,” he said. “It’s something that I want to do, for sure.”

The combined youth groups are just the beginning of the collaboration between the two churches and the college.

Nursing students from the college are working with medical professionals from both churches to learn “soft skills of how to have a conversation with a 90-year-old, how to care for somebody in a memory-loss unit,” Talbott said.

Both churches have TV production facilities, and they are working with the KWU broadcast program.

Directors, band members and singers from the KWU music department joined the staffs of both churches.

“It grew like a wildfire,” Talbott said. “Not only were the youth intermingled but so were the adults.”

Soon, the churches were having weekly worship planning meetings together, using the same sermon topics and liturgy — and even printing the same bulletin.

Since January, Meyer and Talbott swap pulpits at least once a month. Combined Holy Week services on Maundy Thursday (at Trinity) and Good Friday (at University) drew 150 persons each, far greater than the number that would have attended. The Good Friday service was what the pastors called a “funeral for Jesus,” with representatives from each church playing Biblical figures giving eulogies for Christ.

By July 3, for the Independence Day holiday weekend, Meyer and Talbott decided to have a joint service at Sams Chapel on the Wesleyan campus, with more than 250 people attending.

“The biggest naysayers who were angry about not having church at their churches came up to us afterwards and said, ‘We have to do this every quarter — this is so much fun,’” Meyer said. “We knew from then on we had permission from the congregation to do many things together.”

The biggest complaint before the joint service, Meyer said, was that it took church members away from their accustomed worship time.

“When they saw what we could do when we combined the talent of everybody, it totally changed their minds,” he said.

Communion at the July 3 service was served by the Rev. Karen Rice Ratzlaff, superintendent of the Salina and Hutchinson districts. The pastors said Ratzlaff told them to consider the first year an “experiment,” in case it didn’t turn out as well as they expected.

Ratzlaff is pleased with the collaboration.

“It can be lonely in ministry, even in larger congregations,” she wrote in an email. “This may be why I am so inspired to see two pastors coming together to form a partnership that energizes each of them as spiritual leaders and celebrates the ways they are better together, building on the different strengths each one brings.”

Besides the combined youth group on Wednesday night, Trinity is busy with two adult Bible studies led by Meyer and Talbott, a confirmation class and choir practice.

The next step, the pastors agree, is to ramp up to a learning and enrichment night called The Academy, where classes would take place at both churches on Wednesdays.

Here’s some advice on collaboration from Rev. Eric Meyer and Nick Talbott:

Humility. “We can work together regardless of who gets the credit,” Meyer said. “Ego kills it. If there’s an iota of ego involved, it will kill the program.”

Find a third party that benefits. “We have a mission field of beautiful people that are really struggling, trying to figure out where to go in life, and it’s easy for a congregation to get behind that,” Meyer said of KWU students.

Get church members involved. “Give them the grace and trust that we’ll go where we’re given the best work,” Meyer said. “The congregations will have to pick up the pastoral care and other roles that are traditionally the pastor’s.”

Recognize individual gifts. “We’ve done a great job of staying in our lanes,” Talbott said. “I think sometimes in collaboration we want to be all things to all people. And I think this collaboration gives us the freedom to say, ‘I’m gonna stay in my lane.’”

“Our hope is that by the fall of next year we’ll be able to hand out a course list where people can look at it and register for a course,” Talbott said. “They can literally have a sheet of paper with seven, eight, nine classes offered. It’s almost like a church discipleship institution.”

Already in place — although they’re waiting on printing matching T-shirts to make it official — is a small group called the Methodist Game Day Crew, who sit together during Coyotes sporting events.

Plans are also underway for a second, combined choir that would alternate Sundays between the churches.

Support for the student body from University, which is across the street from the Wesleyan campus, was especially evident this year, Talbott said, with 750 attending a “Worship with the Yotes” service the first Sunday of the school year, and the entire football team attending a service the next week and interacted with University church members during a meal.

“We’re really starting the fruit of all the groundwork we’ve been laying,” said Talbott, the football team chaplain and a former assistant coach.

Talbott is also campus pastor at KWU, running the chaplaincy program and serving as pastor to faculty and staff. Scott Jagodzinske is campus minister, in charge of worship planning and programming, and managing a peer minister program. He splits his time with Salina First UMC.

The KWU students, Talbott said, get not only work experience for their resumés but can take advantage of networking to find jobs once they graduate. They’ve already found a previous University worship leader a job at a church in his hometown in Arizona. Holland, the L.A. native, is being set up for a youth ministry position at a church in Jacksonville, Florida (where his parents now live), when he graduates in January, Talbott said.

“We create a congregation of teachers, of mentors. We are literally into the business of sending disciples of Jesus into every corner of the world,” Talbott said. “We’re creating the next generation of leaders in the church, not only for Trinity and University but every church and conference in the world. We’re in the business of creating the next generation of leaders.”

Both churches have seen a growth in young families attending, the pastors said, and the new collaborations offer something to serve them.

“We’d better be ready” for their needs, Talbott said.

“Those kind of relationships are going to naturally inspire someone to be part of the congregation,” Meyer added.

The pastors are pleased with the results.

“What we’re doing is giving members of both churches a ministry, a mission of supporting students, but at the same time the students are supporting them,” Meyer said. “There’s this beautiful quid pro quo. Everybody’s gaining something from it.”