Satellite congregation in Wichita votes to withdraw from UMC

The west campus, which has approximately 350 people in worship each week, began as a daughter campus about 10 years ago. Since then, the goal has been for the west campus to flourish and grow to the point that it could mature into its own, self-sustaining United Methodist congregation. But that plan recently changed.

“West campus Pastor Aaron Wallace acknowledged his frustration with some of the struggles occurring within the denomination,” the Rev. Rick Just, lead pastor at Asbury Church, said. “He was emphatic that this was something he felt God called him to do, and him only. However, the west campus leadership responded by affirming that same calling.” 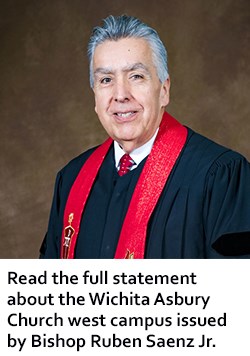 The west campus leadership and congregation met Thursday, March 16, with the Asbury Church board, which is comprised of members from both campuses, to take a straw poll to determine whether to carry through with the plan to separate from parent campus. The announcement of the decision was made Sunday, March 19, in worship services at both locations.

“We’ve always known that there was a desire by the daughter church, the Asbury west campus, one day to become an entity to themselves rather than remain connected to the mother church, Asbury central campus,” said Just, who is in his second year leading Asbury Church. “We were not aware, however, that this decision was in the making until earlier this year.”

The Rev. Dr. Linda Louderback, Wichita West District superintendent, said the situation is, in essence, a split of a local congregation, so the local parent campus leadership will determine much of what happens as a result of the announcement. Several important details have yet to be worked out. For example, several years ago, Asbury Church approved a capital campaign and mortgage in excess of $1 million for the west campus building. Despite growth in the congregation at the daughter campus over the years, the central campus still shares in paying a substantial amount of the mortgage and operating expenses, including staff salaries, for the west campus.

Under a proposal presented by the Asbury Church leadership, the west campus congregation will have approximately 30 days to purchase the building. Should the west campus not be able to secure financing or if the offer to purchase is not accepted by the central campus by a vote at a called church conference, steps will be taken to put the building and property up for sale.

Louderback said because of the financial implications for the central campus, there will be as little delay as possible in selling the building.

Should the building be put up for sale, the final Sunday for the west campus, at least in its current form, would be Easter Sunday, April 16. The preschool that operates at the west campus would remain open until May 18.

“It saddens me to lose this dynamic congregation that is reaching the young population in the fast-growing west Wichita and Goddard area,” Louderback said. “It would have been my desire that the west campus would have moved more slowly in making this decision and would have consulted more with the central campus leadership.”

Bishop Ruben Saenz Jr. said clergy and laity throughout the United Methodist Church are in a season of waiting and discernment as members of the denomination experience varying levels of frustration with the impasse on human sexuality and the unity of the church. The denomination is awaiting a ruling from the Judicial Council on the election of an openly gay bishop serving in the Western Jurisdiction and is following closely the progress of the Commission on a Way Forward, a group appointed by the Council of Bishops to review language related to human sexuality in the Book of Discipline.

Bishop Saenz asked the conference to pray about the situation involving the west campus.

“Please pray for Rev. Just, the central campus staff and ministry volunteers, and the members of the Asbury central campus who faithfully supported the extension congregation over the past 10 years with their prayers, their presence, their generous gifts, their service and their witness,” Bishop Saenz said. “Pray that the Holy Spirit would heal and comfort the congregation in these days and lead them with clear discernment for the next steps ahead.”

The bishop also asked for prayers for the west campus congregation as it starts along a new path, as well as the Judicial Council, the Bishops’ Commission on a Way Forward and the United Methodist Church.

Just spoke optimistically about the futures for both campuses.

“Are we sad to be parting ways? Yes. But because of their faithful ministry over the past 10 years, countless people have come to know Jesus Christ as their personal Lord and Savior," Just said. "Lives have been and continually are being transformed by the love of Jesus and the intentionality by those at the west campus to share that love. We wish them well.

“As far as the central campus is concerned, our former Bishop Scott Jones used to always say we are to preach, pray or die at a moment’s notice,” Just continued, referencing one of the disciplines for preachers touted by the denomination’s founder, John Wesley. “I will assure people that Asbury Church will continue to preach and to pray, but you can be sure we will not die!”