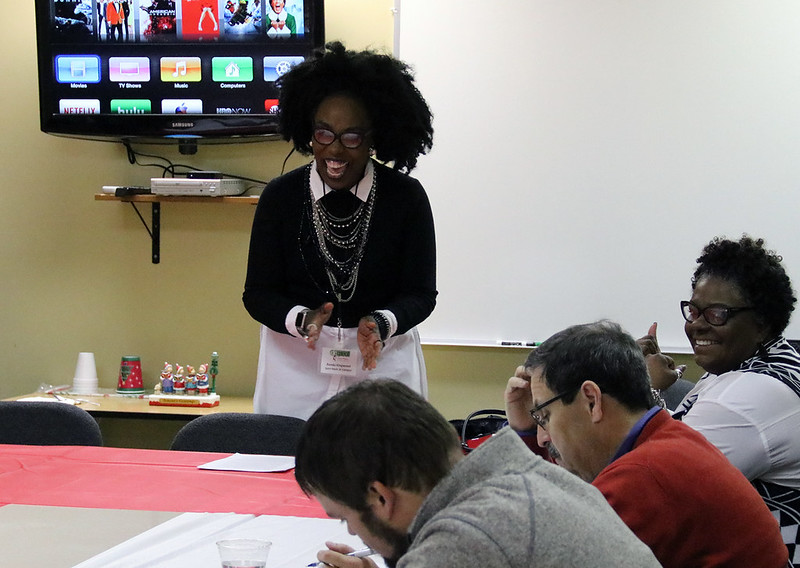 Presenters entering the second round of “Shark Tank” presentations for the Great Plains Conference on Dec. 13, weren’t showing off gizmos and gadgets for big-money backing.

Instead, they brought ideas for expanding ministries and reaching out for new disciples in sessions at First United Methodist Church in Topeka.

Based on the hit TV competition series, the Great Plains’ “Shark Tank,” entrepreneurial-minded pastors made their pitches for new programs to a panel that included other pastors, laypeople with business backgrounds and members of the new church development board. Added from the first session, Feb. 28 at United Methodist Church of the Resurrection in Leawood, Kansas, district superintendents from the geographical areas were part of the audience.

“We want to be in this process, this business, of working to see churches bring in new people,” said the Rev. Nathan Stanton, director of congregational excellence. “‘Shark Tank’ is our way of working with church planters to encourage development and plant plans that they can get feedback. They can continue to shape their plans toward the mission field. We’re able to assist in that process.”

As with the previous session, those submitting proposals were divided among three rooms, one for the Wichita area, one for the Kansas City area and one for Nebraska.

Several of the reports this time included updates on plans that were already put into place.

Stanton said churches need to be thinking with the mind of an entrepreneur to try and connect with new people outside their congregations.

But it doesn’t have to be massive projects, he added.

“We don’t need to go back in with tens of thousands of dollars with the idea of building a large church. But how do we take the witness of Christ into areas of our communities where people are not being reached?” Stanton said. “And how can we empower rural and urban congregations to do that work, without being concerned with lots of money and lots of resources. How can we have that dream of, ‘Just go for it.’

“We want to encourage people to reach out with smaller innovations,” he added. “I would see us beginning to develop opportunities for reaching more congregations.”

Stanton said part of the entrepreneurial spirit was to try again, even if a plan at first falters.

Lorna Geist of Wichita, a member of the new church development board, sat for her second round as a “shark” and was encouraged and heartened by the presenters.

“Almost unilaterally, everyone in the room was so impressed with the passion they have to get the love of Jesus or the gospel of Jesus to the world,” Geist said. “It was overwhelmingly amazing. The passion, the amount of talent that we have, the commitment and the years of investment they’ve already put in so they can come to this place at this time.”

With all the changes in the world and the possible changes in the next few years in the United Methodist denomination, Geist said, those with new ideas are needed more than ever.

“Even in a time of turmoil or unrest … there are going to be changes coming at us. We have not ceased to view the world as a place that needs Jesus,” she said. “It’s just amazing to me the ferocity of people who want to be involved in that.”