The special session of General Conference has concluded in St. Louis. Our coverage will continue in coming days as rulings are made by the Judicial Council related to the Traditional Plan.

Stories and videos from the conference appear below.

Delegates spent the day Tuesday considering a minority report in favor of the One Church Plan and amendments associated to the Traditional Plan, Wespath petitions and other legislation..

Video
Bishop Ruben Saenz Jr. encourages people of the Great Plains to stay focused on our mission as the ramifications of the special session of General Conference take shape.

Shayla Jordan, a lay delegate, provided a speech on behalf of young adults.


Bishop Carter urges Methodists to focus on mission: Bishop Ken Carter, president of the Council of Bishops and a moderator of the Commission on a Way Forward, acknowledged the pain many in the LGBTQ community and their allies feel and urged the church to focus on its mission following the four-day special session.

Alternates reflect on sitting on the sidelines: With such momentous votes coming at any time, reserve delegates at the special session of General Conference saw little to no time on the floor. They watched, paid close attention and showed support for fellow delegates on the floor doing the work of the church.

Young delegate urges unity among the United Methodist Church: Shayla Jordan, a lay delegate from Wichita and a seminary student at the Perkins School of Theology at Southern Methodist University, spoke from the floor on the final day of the General Conference to share a petition signed by more than 15,000 young adults in support of the One Church Plan.

Delegates spent the day Monday as a legislative committee considering the 24 petitions or bundles of petitions that had been prioritized Sunday. The Traditional Plan was passed to the plenary session scheduled for Tuesday. More legislation is still being considered throughout the afternoon.

Video
Bishop Ruben Saenz Jr. describes the third day of the special session of General Conference and shares some praise for the work of the Great Plains Conference delegation.

The Rev. Adam Hamilton talks with David Burke about the continuing effort to ensure everyone feels welcome in the church.

The Rev. Mark Holland talks with David Burke about what is next for Mainstream UMC, a group he helped found.

Dixie Brewster, a lay delegate, talks with David Burke about the emotions that people on both sides felt after a difficult day of committee work.

Shayla Jordan, a lay delegate, talks with David Burke about the possible impact of the General Conference on young adults.

KU Wesley students intently watching special session: Among the many people in St. Louis to observe the special session of General Conference are members of the KU Wesley campus ministry. The group arrived Friday morning and prayed over every chair on the floor, as well as the bishop’s seats, the altar and communion table.

Resurrection staffer on center stage with special session praise band: Rev. Ashley Morgan Kirk joined an established praise team from Brooklyn for worship in the special session of General Conference. Read about how she ended up on stage for a unique experience.

​In Layman's Terms: Some poignant moments on a difficult day: In his blog, Todd Seifert, communications director, reflects on what was an emotional day, the chances for a resurrection of the One Church Plan, and poignant moments from the Great Plains delegation.

Feb. 24 — Report on a Way Forward and Prioritization

Delegates started the day hearing a sermon from Bishop Ken Carter (link below) and heard a full report from the Commission on a Way Forward. The delegates then voted on 24 petitions or packages of petitions, which resulted in Wespath pension legislation and the Traditional Plan landing in the top two spots. The body addressed Wespath's legislation and will take up the Traditional Plan as part of their committee work on Monday morning.

Video
Bishop Ruben Saenz Jr. talks about the second day of the special session of General Conference. He explains the Traditional Plan finishing atop the other plans in terms of prioritization of legislation and provides a brief pastoral message leading into the final few days of General Conference.

Todd Seifert, conference communications director, interviewed Thomas Kemper, general secretary of the General Board of Global Ministries, to talk about the global reach of the church and the unique opportunities and challenges that creates, particularly on the subject of human sexuality.

Great Plains clergy, laity make their way to General Conference in St. Louis: Some of those who trekked from the Great Plains Conference to St. Louis are there to support clergy and laity. Others want to be in the room where and when history might happen for United Methodists. Dozens of pastors, including district superintendents and conference staff members, are in The Dome at America’s Center. A Great Plains coalition, including alternate delegates, takes up much of one section of the arena.

In Layman's Terms: Quick change of atmosphere: In his blog, Todd Seifert, communications director, shares some thoughts about the vote that showed the Traditional Plan had a higher priority for delegates than the One Church Plan.

The special session of General Conference opened with a day of prayer, praise and communion. The day featured music from various areas of the world with a United Methodist presence and provided an opportunity for delegates to interact with others while offering prayers leading to the legislative and plenary sessions of the special conference, which was called to hear and act on the report from the Commission on a Way Forward.

Bishop Ruben Saenz Jr. provides a brief recap of the opening day of the special session of General Conference with this brief video.

In Layman's Terms: Worldwide challenge, opportunities: In his blog, Todd Seifert, communications director, provides some brief analysis of the challenges that come with the tremendous benefits of being a worldwide denomination. His recommendation: Don't even try to count votes until the results are in. 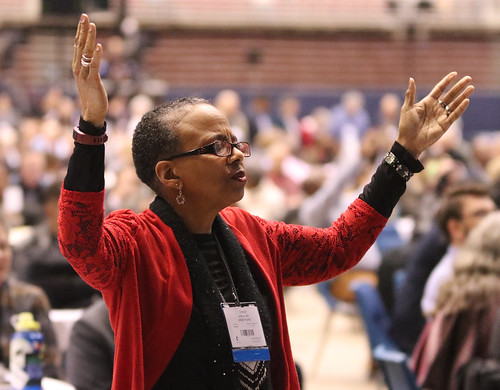 Listen to audio stories recorded from the special session of General Conference. 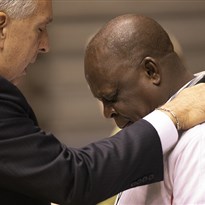 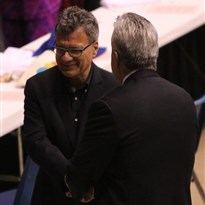