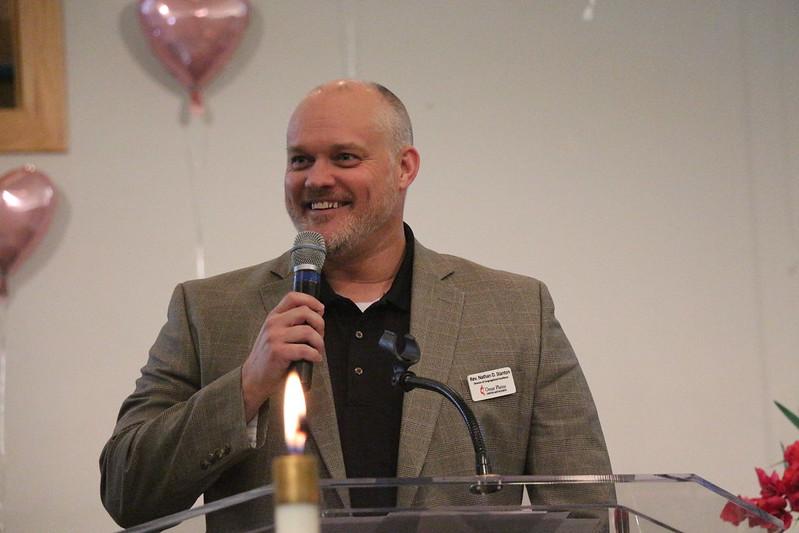 The Rev. Nathan Stanton was determined to make his final months count, a longtime friend and colleague says, despite a diagnosis of ALS.


“He was just a constant encourager,” said the Rev. Amy Lippoldt, pastor of Papillion St. Paul’s United Methodist Church. “It was a habit he had before he got diagnosed with ALS, and then it’s like the dial got turned up to 10 on his encouraging.

“He decided he needed live that out to its fullest: Recognizing people for their gifts, speaking out loud to them, and being a cheerleader,” she continued. “That’s part of what made him good at his job, as far as planters and those with entrepreneurial spirit. He just leaned into that gift of encouragement that he already had — I don’t know if it was consciously, but he decided that was going to be his legacy.”

Stanton, who served nearly five years as director of congregational excellence for the Great Plains Conference, died March 12, about 19 months after being diagnosed with ALS, commonly referred to as Lou Gehrig’s Disease, which limited his speech and swallowing and caused the loss of use of extremities.

The congregational excellence team at the conference is dedicated to providing training and resources to local congregations; campus, camping, and mercy and justice ministries; as well as disaster response, among other ministries. In his previous conference position as new church development coordinator, he oversaw 13 new congregations formed, a majority of them predominately Black, African and Hispanic.

A celebration of life for Stanton will be at 2 p.m. Friday, March 18, at Sams Chapel inside Pioneer Hall at Kansas Wesleyan University in Salina, where Stanton graduated in 1991 and most recently served on the board of trustees.

Lippoldt will be among those officiating the service, along with Rev. Dr. Paul Wilke and Bishop Ruben Saenz Jr.

“I’m going to have to give myself a time limit, because I feel like I could talk for two hours,” Lippoldt said.

Lippoldt got to know Stanton in 2002, when they shared a class in church-based clinical pastoral education at the Conflict Resolution Center in Wichita.

For six years, she said, their churches were 1½ miles from each other, and they would gather for coffee weekly. “Sometimes those coffees would be three hours,” she added.

Lippoldt said that in one-on-one situations, Stanton was outgoing and funny, while serious in large group meetings.

“In a group, Nathan never needed to be the center of attention at all, even if he was in charge,” she said. “If there was more than three or four people in the room, he could go through a meeting without saying anything. But if you were one-on-one in him or if he was texting you during the meeting, you’d hear all kinds of wisdom.

“He was hysterical,” Lippoldt added. “You didn’t know that unless he wanted you to know that. He didn’t force himself, and he didn’t seek the limelight.”

Rev. Rick Just, pastor of Wichita Asbury UMC, first met Stanton in 1994, when they were both ordained as deacons.

“Here’s this buff, long-haired guy, and I’m thinking, ‘Who is this guy?’” Just recalled with a laugh abut his friend, then with a long mane.

The two worked together in the former conference office in Wichita, when Stanton coordinated new church development, and Just was Wichita East District superintendent.

“He was such a good listener,” Just said. “People who know me know that what I’m thinking is usually going to come out of my mouth pretty quick. I learned some things from him about that. … He would always process, think through. I was amazed at how he could do that. I appreciated that a lot about him.”

Just visited Stanton at his home in Salina eight days before his death. He brought along a bag from Target to make Stanton laugh. The two dropped the name of the superstore to each other in social media posts ever since the 2016 General Conference in Portland, Oregon. Just said the joke was just between the two of them and wouldn’t divulge the origin.

“I tried hard to see if I could get him to laugh hard. I loved when he laughed hard. It just made me laugh that much more,” Just said. “He was a serious guy, but he could laugh if I could push his buttons enough to get him over that hump.”

Just praised Stanton’s ability to get along with everyone.

“He had a heart for Jesus that I really appreciated, and he could work across the aisle,” Just said. “He had an uncanny way to minister to and with others.”

Wilke, senior pastor of Topeka Countryside UMC, was part of a covenant group with Stanton and other pastors — Revs. Michael Tomson-Degreef, Jeff Clinger, Barry Dundas and Mitch Todd — who called themselves the Mostly Holy Club. A week before Stanton’s death, the pastors launched and made contributions to a GoFundMe page for his medical expenses, with a $100,000 goal. The site is still available for contributions to help offset expensive medical care costs incurred by the family.

In the group discussions and his own interactions, Wilke said Stanton had a constant commitment and focus on his wife of 27 years, Brenda, and their sons: Noah, Isaac and Eli. Noah and Isaac are students at Kansas Wesleyan, and Eli is in eighth grade.

“In the midst of all his ministry, he loved being a dad,” Wilke said. “One of the things he told me that broke his heart when he was first diagnosed was that he wouldn’t get to see Eli graduate from middle school. He could have gone into a thousand things that he hates he’s going to miss in their lives, but that was first.”

Wilke found a competitive streak in Stanton that not many others saw, he said, especially when Stanton would stay overnight at Wilke’s house and the two would have intense ping-pong games.

“You might not know that he was competitive,” Wilke said. “We pushed each other to the limit most every game.”

Wilke said Stanton felt the accomplishments of his family were greater than the work he did himself.

“I hope in highlighting all his accomplishments in ministry that his person is not lost beneath all that,” Wilke said.

Rev. Dr. Marshall Stanton and Janice Stanton said their son always had pride in his family. Marshall Stanton pointed to a Facebook post Nathan made a few months earlier: “I love my life, I love the lives of my family, and I’m going to live as long as I can.”

“Is there anything better than any of us can do than that?” his father asked.

“He had such pride in what he was doing in his job, as well these three young men,” Janice said of her grandsons. “They are such beautiful, gentle men and I know that comes from the parenting from their mom and dad.”

Marshall said the boys learned that attitude from their parents.

“I don’t know that he treated anybody badly. Not many can ever say that, especially when you get into conference work,” he said. “That is a delicate position to maintain relationships with everybody.”

His mother said that Noah and Isaac also share traits with their father in sports.

“You put him on a football field, and he was not mean, just vicious,” Janice said of Nathan, an all-KCAC Conference defensive lineman at Kansas Wesleyan.

Besides football, Stanton was active in theater with a dozen performances to his credits on the Wesleyan stage, including “Waiting for Godot,” as Felix in “The Odd Couple” with a Black fellow lineman from the Coyote football team as Oscar, and as the lead in the musical “Carnival!” his senior year — despite, his mother said, an admonition from his fifth-grade music teacher that he would never be a singer.

Stanton went on to earn a master’s degree in theater arts from Kansas State University, but was reluctant to go into ministry, Janice Stanton said.

“He hesitated to follow in his dad’s footsteps, and it’s very daunting when you think you’re going to go into that profession,” she said.

Marshall Stanton was a United Methodist pastor from 1958 until he was named as president of Kansas Wesleyan from 1983 to 2002.

“But I felt like he made his own mark, going in a slightly different direction than his dad, and he did it very well,” Janice said.

Prior to serving on conference staff, Stanton served as pastor at Wichita Pleasant Valley, Anthony, Plains-Kismet, and at Wichita Saint Mark, a historic Black church. At the latter, his father said, he had to take over the administrative duties after the departure of a staff member — “It’s like getting into the water when you don’t know how to swim,” his father said.

“I think he was loved in every church he was at,” Marshall Stanton said.

One of the members of Pleasant Valley approached Marshall one day and complimented his son as a good leader.

“I thought that was a special kind of tribute. He wasn’t a good administrator, wasn’t a good preacher. He was a good leader,” he said. “That has a nuance to it that describes Nathan’s style.”

The Stantons said their son wasn’t incredibly outgoing but was able to get his message across.

“That intense motivation within Nathan didn’t come out with a bubbly burst of energy. It came out with intensity, and he pursued his ministry with that intensity,” Marshall said. “He didn’t put up with too much nonsense.”

Since the announcement from the Great Plains Conference in early February that Stanton was to take medical leave effective July 1, Marshall Stanton said he and his wife have received a constant stream of messages from high school, college and pastoral friends of their son on social media and through email.

“They talked about what Nathan had meant to them, his care, his interest and his stimulation of their hearts and minds, and just plain friendship,” Marshall said.

His son’s final days “were not pleasant,” his father said. Nathan continued to lose functions in his final month and could only communicate with his thumb and one finger on his cellphone.

“It was difficult to hold his head up much. He continued to have difficulty with drawing enough air,” his father said. “He just declined.”

Nathan suffered from bronchitis and was tested for pneumonia, his father said, and had developed a cold earlier in the week.

But he continued his work with ministries in the conference.

“There was nothing wrong with his brain. Up until that last week, it was really uplifting to get on Zoom and interact and be a part of the conference activities,” Marshall said. “I felt like in many ways that was one of the reasons he could continue as he did, because he felt a purpose in his job.

“It was painful to know he was all there,” he added, “he just couldn’t function.”

Their son, Marshall said, was grateful and graceful until the end.

“We passed on life to him and showed him how to live,” he said. “And he showed us how to die.”