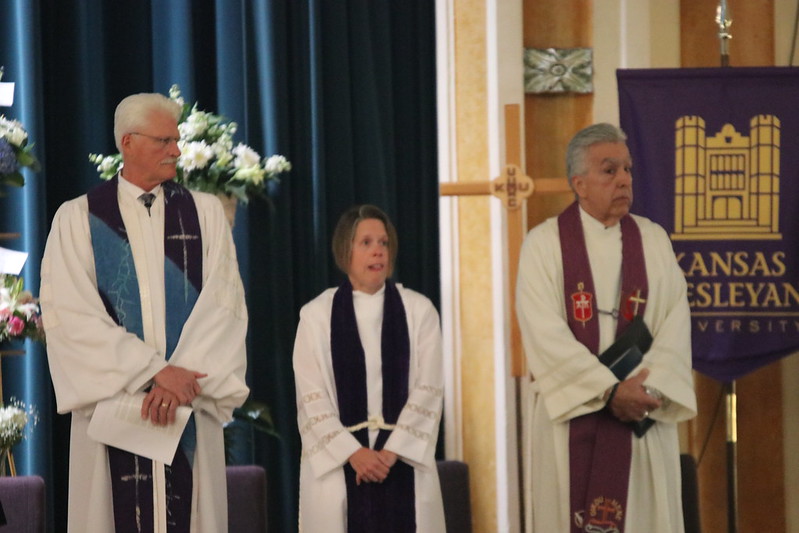 Family, friends and colleagues remembered the encouragement, humility and sly sense of humor of the Rev. Nathan Stanton during a celebration of his life March 18 at Kansas Wesleyan University in Salina.

“He never stopped doing what he did or being who he was,” Bishop Ruben Saenz Jr. said in eulogizing Stanton, Great Plains Conference congregational excellence director, who died March 12 at age 52 of complications from ALS.

About 600 mourners, from high school and college friends to colleagues in his 23 years of ordained ministry, gathered at Sams Chapel on the campus of Kansas Wesleyan, where Stanton was a 1991 graduate and most recently a member of the board of trustees. Another 560 people watched a livestream of the 75-minute service.

“Nathan epitomized the strong, silent type – wouldn’t you agree?” the Rev. Dr. Paul Wilke, a longtime friend of Stanton, asked the congregation. “Despite his quiet, gentle demeanor, Nathan had a deep intensity.

“That intensity served him well in life,” continued Wilke, pastor at Topeka Countryside UMC. “His passion for ministry, for justice, for service, for the love of the Lord, for the church, for people all showed an inner intensity that defied his outward calm and quiet.”

Wilke said Stanton, who was diagnosed with ALS in August 2020, most regretted not being able to watch the events in the lives of his three sons, and at the top of the list was watching his youngest, Eli, graduate middle school.

“It robbed Nathan of something that heaven can’t replace – time with Brenda and his sons,” Wilke said of Stanton’s widow and Noah, Isaac and Eli.

Wilke said he sees aspects of their father in each of Stanton’s sons, and “if you get the privilege of being with the three of them together, he is totally there.”

Stanton and Wilke were part of a pastoral covenant group that named themselves Mostly Holy, which had started a GoFundMe page for Stanton’s medical expenses with a $100,000 goal. Donations are still being accepted.

“Nathan was an encourager,” Wilke said, “that’s why we’re all here today.”

Dedication to his family and Stanton’s encouraging way were also the themes of a eulogy by the Rev. Amy Lippoldt, who knew Stanton for 20 years.

She recalled him motivating her and standing behind her as she made her first statements on the floor of the annual conference session.

“Encouragement was at the core of who Nathan was,” she said.

“Nathan never needed to take up all the oxygen in the room. He didn’t need to be the center of attention. He never talked just to hear himself talk – an unusual characteristic in a preacher,” she said, to a response of laughter from the clergy-heavy congregation. “He had this deep humility that kept him from self-promoting, even when it would have benefitted him to do so.”

She also highlighted Stanton’s election as a clergy delegate to the 2012, ’16 and ’20 General and Jurisdictional conferences, as well as his work on the board of directors for the General Board of Global Ministries.

“Nathan had friends and respected colleagues around the connection,” Lippoldt said. “He’s going to be missed by United Methodists across the country.”

The ALS diagnosis, she said, only spurred on his commitments.

“Somehow, he managed to let his strengths and his gifts to grow and radiate during his illness,” Lippoldt said. “Nathan with ALS managed to be even more Nathan.”

“Are you moving the chains today?” the bishop said he would frequently ask Stanton – a football term for advancing the ball downfield for a first down.

“Moving the chains” was simplified to MTC, which is how each other would sign off in emails and texts to each other.

Bishop Saenz called Stanton a “billion-word texter,” and asked for a show of hands from the congregation who had received messages from him. A vast majority agreed.

The bishop read his final text from Stanton, who praised the work of the congregational excellence team he had led for nearly five years.

“He loved – loved, loved, loved – his ministry and his congregational excellence staff,” the bishop said of the team, who served as pallbearers for the funeral.

“You really begin to realize just what a gift Nathan was to all of us and how much we lost,” the bishop said, “and how we were blessed when we had him here with us.”

Music was performed by Ronda Kingwood, pastor of Wichita Heart of Christ UMC, and Lydia Harbutz, a congregational excellence administrative assistant in the former conference office in Wichita. The Kansas Wesleyan choir led the congregation in “Be Thou My Vision” and “It Is Well With My Soul.”