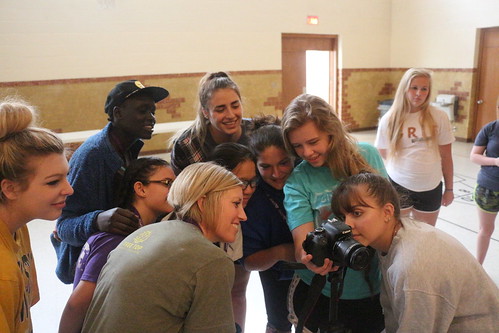 Ministry, teenagers at the Summit Youth Academy have learned, doesn’t necessarily require wearing a robe and standing behind a pulpit.

As part of the second-annual, one-week camp presented by Southwestern College, 23 of the high school juniors and seniors made their way to Wichita to learn about the neighboring movement in the South Central neighborhood of the city.

On the Thursday of the July 22-28 session, students learned about the work done by SoCe Life, which has spun into the national NeighboringMovement.org, whose founders include the Rev. Adam Barlow-Thompson.

“We want to give pictures to these young people of the transformative work that they’re doing here in south central Wichita,” said the Rev. Wendy Mohler-Seib, Summit director. “We think it’s something that can translate into their own communities, whether they’re in an urban setting or a rural setting – just the idea of being a good neighbor.”

Barlow-Thompson told the youth that ministry is “finding little niches and crevices to carry out your faith.”

The youth toured Legacy Minstries, a nonprofit urban ministry that provides hands-on mission work through pottery, gardening and roasting coffee beans. The teenagers spoke to women helped by the Raise My Head Foundation, which reforms former works in the sex-trafficking industry by getting them clean and sober.

They also worked with a SoCe Life staff member who showed how photography can bring groups of people together, using silly descriptions so participants could create tableaus that became pictures.

Mohler-Seib said that SoCe Life’s work is inspiring to the Summit campers.

“A lot of this generation is excited about entrepreneurial ministry and ways they can live out their calling in a way that’s different than traditional pastoral ministry,” she said.

Thirty-two Summit Disciples spent their week on the Southwestern campus. Nine of them were returnees from the initial year and were on the newly formed “Track 2,” with more in-depth projects.

Southwestern students, dubbed Summit Guides, took over much of the planning for the worship, Bible study and free-time activities this year.

“We have a vision for where we’re going, as opposed to the first year when it was just in my mind,” said Mohler-Seib, director of faith formation for youth and young adults at Southwestern's Institute for Discipleship. “They took ownership of different pieces and made it come together.”

Among those Summit Guides is Madison Stumbough, a senior this fall at Southwestern. A Bonner Springs native and director of children’s ministries at Winfield Grace United Methodist Church, Stumbough said Summit gave her opportunities that other groups might not have.

“I really dove into those communities, but I was always searching for more, wanting more, and wanting to go deeper. I think that’s the beautiful thing about the Summit, is that that’s the whole point,” she said. “Other camps are amazing community builders and are great at what they do, but at the Summit, they really focus on hearing God’s voice in their life, and that’s something that’s hard, for high school kids especially.”

Tyler Nelson, a junior this fall at Mulvane High School, said his first year of Summit made an impression.

Mohler-Seib said the third full week of July next year is already set aside for the third-annual Summit, with interested disciples already in place.