The loud tolling of a historic bell rang in 2016 at Trinity UMC in southeast Lincoln.

Thanks to two years of volunteer work and generous memorial donations by two Trinity families, the bell from the chapel where Trinity and three other Lincoln churches got their starts more than a century ago is now on permanent display near 56th Street and Pine Lake Road.

Hoping to start a new New Year’s tradition, a small group of Trinity members — chilled by near-zero cold but warmed by hot apple cider, cookies and the strains of “Auld Lang Syne” — gave the steel bell a midnight push to tell the neighborhood that 2016 had arrived.

The bell’s unofficial dedication had occurred six weeks earlier when it was rung as part of Trinity’s annual church conference. Funds to restore and display the 136-year-old bell were provided by memorials to Trinity members John Luethje and Konnie Howser, and Konnie’s mother, Mary Hurlbert. Family members and elementary church school children shared in the first ringing of the bell. 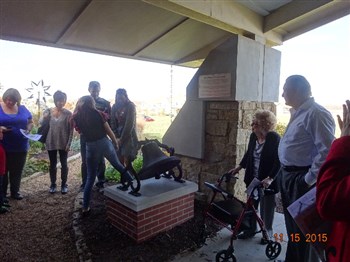 The bell’s story begins with one of Lincoln’s original pioneers and also involves one of Nebraska Methodism’s most successful early pastors.

Lincoln historian Jim McKee says Edward Warnes was on the 1863 committee that investigated the future Lincoln area as a potential site for a Methodist seminary for women. McKee says Warnes probably built the first real home in a settlement that became Lancaster and eventually Lincoln, the capital city.

In 1879, near Ninth and Wood (now Garfield) streets in southwest Lincoln, Warnes built a small wooden chapel, offering its space to any fledgling congregation seeking a place to worship. Atop the chapel he placed a steel bell that would call the scattered residents of south Lincoln to worship for 24 years.

First to answer the call was the Rev. A.L. Folden, a full-time carpenter and part-time circuit rider from Saint Paul UMC in downtown Lincoln. On March 30, 1879, the Rev. Folden brought together at the community chapel a gathering of seven people. From that early spring service, two weeks before Easter, emerged the congregation that eventually would be known as Trinity Methodist.

Folden had gotten a late start in his ministry, with his first appointment at age 43. Nonetheless, according to Methodist historian David Marquette, Folden “helped lay the foundation of early Methodism in this state” and literally the foundation of many new church buildings. Nebraska Conference minutes of 1912, the year after Folden died, said “(a) great many people were converted under his ministry and he claimed to have started more young men in the ministry than any other member of the Conference.”

The forebears of Trinity United Methodist Church worshiped in Warnes Chapel (also called Wood Street Chapel) about a year before outgrowing its small confines. Over the next seven years, the congregation met in five other locations before erecting a small church at 16th and A streets and officially being named Trinity. Trinity remained at 16th and A until 2010, when it moved to Village Gardens in southeast Lincoln. Its ministry still includes a large child-caree center at 16th and A. 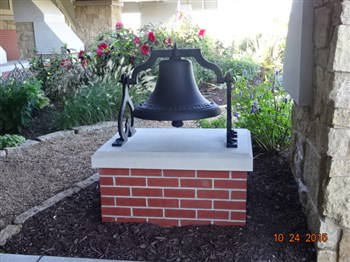 In 1903, Warnes converted the chapel to a small home for his newly married daughter. That home still stands at 918 Garfield St.

The bell was lowered from the chapel roof, then stored in a barn and possibly at Calvary Evangelical before finding a new home at the Evangelicals’ new Riverside Park near Milford in 1919.

A camp history says of the bell: “When Mother Warnes (Edward’s wife, Hannah) learned of the desire for a suitable bell at Riverside Park ... she presented this historic chapel bell to the Riverside Park Board, who installed it at the Park on Aug. 17, 1919, and dedicated it to the service of God at Riverside Park.

“So the voice of the bell that once had called the Methodists, the Presbyterians, the United Brethren, and the Evangelical Association to the house of worship, now calls again in beautiful Riverside Park to worship, recreation, and fellowship.”

For the next 40 years or so, the bell called out to thousands of campers. In 1938, a camper penned an ode to the bell. The first lines of “Old Assembly Bell” read:

Ring out, Old Bell! Extol thy prayer,
Thy celestial call afloat on air
Bids us to come and worship God
And lift our soul from its house of sod.
Ring out thy chime of happiness
And may each toll a joy express
Of yesterdays, when other souls,
Responded to thy gladsome tolls.

About 1960, after a damaging flood at the camp, the bell was returned to Lincoln and stored at Calvary.

In 1984, Lincoln historian Steven Hutchinson discovered the bell in storage at Calvary — in a box marked “Of no historical significance” — and the bell, minus a clapper, was returned to Riverside. It remained there until the camp closed in 1999. In 2014, it was rediscovered on a workbench in Calvary’s garage and taken to Trinity — with Calvary’s consent — to be refurbished and displayed.

A plaque notes the bell’s history, including its ties to Southminster, Calvary, Third Presbyterian and Camp Riverside. Written by Bill Eddy, a member of Trinity UMC and chair of the church council ans well as Trinity's historian. Photo from April 2014.