On the South Central Jurisdiction’s record 35th ballot, delegates elected the Rev. Robert “Bob” Farr as the third of three bishops to be chosen during the 2016 conference.

Farr, 56, is the director of congregational development for the Missouri Conference. He received 138 of the 212 votes of the delegates, comprised equally of clergy and laity. The Rev. Dr. David Severe, executive director of the jurisdiction, said the previous record for the number of ballots to fill episcopal positions was 30 or 31.

'It was an emotional roller coaster," Farr said of the extended ballots. "It meant a lot to have the support from the conference, the clergy and the laypeople here."

Farr, who was also a candidate for bishop during the 2012 Jurisdictional Conference, watched his vote totals fluctuate through the two days of balloting.

"I thought, 'Well, this isn't gonna work out,'" said Farr, who received as few as 33 votes in some rounds. "I've been to Jurisdictional Conference five times, and I've never seen anyone come back from that."

Farr has served as the director of the Center for Congregational Excellence since 2007, guiding 35 church starts and overseeing more than 150 Healthy Church consultations in the Missouri Conference. He also has led 128 individual church consults in 29 conferences across the connection. Prior to serving in that position, he pastored a restart urban church in Kansas City, Missouri, and started Grace UMC in Lee’s Summit and Hope Church in Lone Jack, both in Missouri. His most recent local church appointment was at Church of the Shepherd in St. Charles, a St. Louis suburb, where he led the congregation through relocation that contributed to an increase in worship attendance from 450 to 1,200 people.

Born in Independence, Missouri, Farr was raised in small town of Creighton in the east-central portion of the state. He earned a bachelor’s degree in organizational communication from Central Missouri State University (now University of Central Missouri) in 1981 and a master’s of divinity degree from Perkins School of Theology at Southern Methodist University in Dallas in 1985.

Farr has served United Methodist churches since he was 18, beginning as a student pastor in 1978.

His wife, Susan, is a teacher. They have two adult children and two grandchildren. 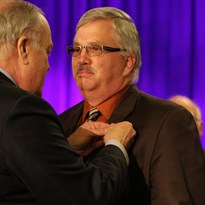