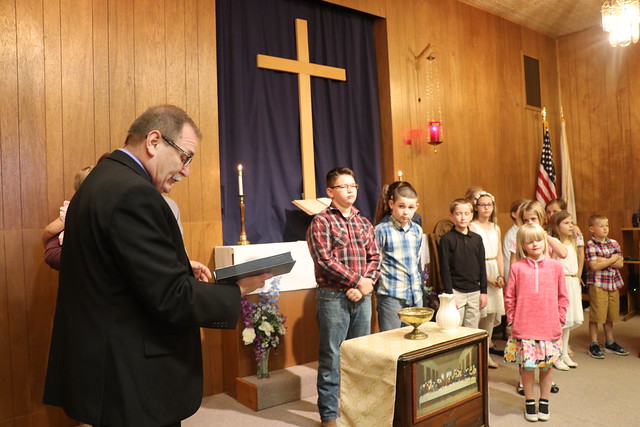 One by one, they stepped up to the small table where a pitcher and a bowl of water sat.

Most of the 12 children — first- through eighth-graders — winced a bit in anticipation of the water that was sprinkled on their heads, but almost all of them walked away with contented smiles on their faces.

By the time they were finished, the dozen kids – along with a 16-month-old toddler girl – were all baptized on April 28 at Kanopolis United Methodist Church in central Kansas, a church that averages 28 in attendance.

Kim Schneider, who teaches Sunday school for the fifth- through eighth-graders at the church, said the subject of baptism was discussed in lessons about a year and a half earlier.

“They decided they wanted to do it,” Schneider said. “It’s the kids’ idea, and that’s huge.”

For the past month and a half, there have been conversations in Sunday school about the meaning of baptism.

Schneider said all of them, many of whom regularly attend church without their parents, were excited about the possibilities.

“They’re little sponges,” she said. “They like to ask a lot of questions and pick up all the information that they can.”

The Rev. Dennis Carter, the church’s pastor, used water that included some from the Jordan River on a trip he took to the Holy Land.

“It might turn green, mom and dad,” he told the parents in the congregation. “I didn’t use that much of it, so we’re gonna be OK.”

Sixty-eight people made their way into the church, which was formerly the high school gym — double the attendance for Easter Sunday the week before.

Seven of the 13 children were of two families of Neumans in the congregation.

Olivia Neuman, 14, said she was “kinda nervous” before the baptism, but realizes its significance.

“It’s to accept Christ and have him in my life forever, that I can continue on in my faith,” she said.

Eleven-year-old Nelson Neuman, Olivia’s nephew, said he got the jitters before the sacrament.

“I’m really grateful I had the chance to experience it,” he said. “My nervousness kind of stopped. So many people came out to motivate us and be there with us.”

Nine girls and four boys were baptized. Among the girls were Stacy Hicks’ 12- and 8-year-old daughters.

“We’ve been planning this for a little while,” Hicks said. “It makes me proud that they’ve accepted Christ, and that this is somewhere they look forward to coming to.”

Carter said four of the newly baptized youth are the right age for confirmation classes, which will begin soon.

To help explain baptism to the youth during their lessons, Carter showed the opening scenes from “The Lion King,” where young Simba is presented to the heavens.

Carter said he was impressed with all of the youth who wanted to be baptized.

“It’s pretty amazing in a little community like that,” he said.

David Burke, communications content specialist, can be contacted at dburke@greatplainsumc.org.