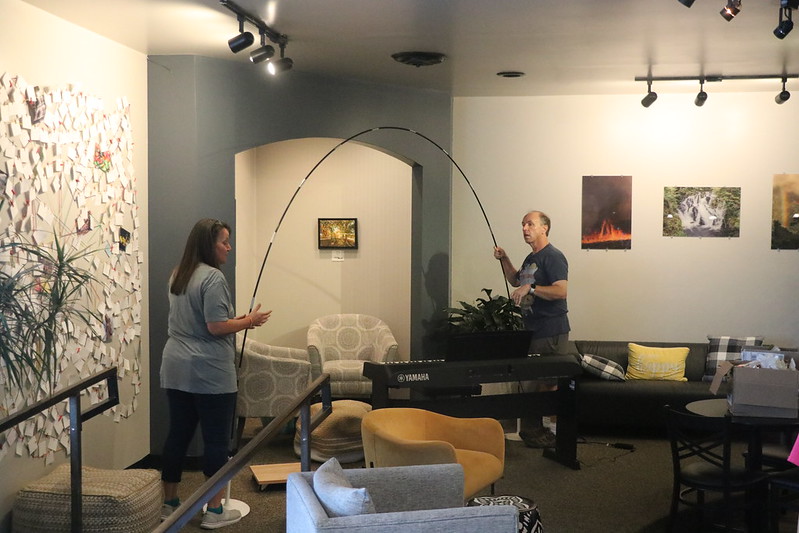 Balloons have always been a part of Randall and Marlana Hodgkinson’s lives.

While students dating at Wichita State University nearly 30 years ago, he led her on a balloon-themed scavenger hunt for her birthday, which ended with her arms full of balloons — and a proposal. They even rode off from their wedding in a hot-air balloon.

“It became a thing for us,” Marlana said. “He’s surprised me with balloons many times.”

They kept their affection for balloons to themselves for many years, until they were asked to help decorate their church, Topeka First United Methodist Church, for a fall kickoff Sunday.

“I don’t remember particularly how we came to volunteer, but we did,” Randall said. “That was the first time we did any balloon decorating. They let us play around with it. We experimented.”

They got such a kick out of working with balloons and the response it got that they started providing balloons for birthdays, anniversaries, graduations “and to random people sometimes,” Randall said.

The couple looks at balloons as their ministry.

“They’re shiny, they’re pretty, they’re happy. You can give them away,” Marlana said.

“In my experience generally when we bring balloons to people it makes them smile, it makes people happy,” he said. “It lifts peoples’ spirits.”

The Hodgkinsons see giving balloons as an expression of gratitude.

“It has to do with being able to give them away and spreading joy and taking it out and sharing them with the world,” said Marlana. “If he sees a need he’ll make a balloon bouquet. He wants to celebrate with you.”

“If you take balloons to people, they generally react to it, and it’s generally positive,” Randall said. “We decorated for church one time, and a kid walked in and said, ‘Wow, it’s a party!’ That’s exactly what we want church to feel like.”

A Topeka attorney and visiting law professor at Washburn University, Randall is associate conference lay leader as well as being a Certified Lay Speaker. He added a master’s of divinity from Asbury Theological Seminary to his law degrees in 2020.

The couple arrived at Café Quetzal, a coffeeshop ministry in Topeka, the night before its first anniversary party to prepare a balloon garland and arch for the celebration, toting boxes of balloons of various styles and colors.

With a four-spigot air pump, they inflated dozens of balloons in about 10 minutes, tying each of them off and sometimes tying two or three together.

“We’ve kind of got a routine now,” Randall said. “When we sit down to do it, we can make quite a few balloons in a quick amount of time.”

The next day, they bring helium balloons to decorate individual tables in the coffeehouse. Randall, who received a helium tank from his wife as a Christmas present, said supply chain issues and increasing cost

make helium less desirable for balloon makers — even the University of Nebraska football team, which had its players enter the Memorial Stadium field through a balloon arch, is forgoing the tradition this year, he said.

One of the couple’s biggest projects was last year, decorating Holton High School’s stage for its production of “The Wizard of Oz.”

The couple still surprises each other with balloons at their places of work.

“I’ll leave them at the desk,” said Marlana, who works in youth services at the Topeka & Shawnee County Public Library, “and sometimes it makes children cry because they can’t take them home.”

The Hodgkinsons are occasionally tempted to turn their hobby into a full-fledged business, but they like the ability to pick and choose their projects without being obligated to a contract.

Rev. Christine Potter, who leads Café Quetzal, said she’s been grateful for what colorful balloons have done for both the coffeeshop’s grand opening last year and birthday this year.

“It brings a whole new level of joy to the celebration we’re having,” she said. “They’re fun to watch work together, and they’re super creative. It just totally transforms the space and the mood.

“They’re just so positive and joyful,” she added.

The Hodgkinsons say getting balloons together isn’t always a joy — they’ve occasionally ended up with bloody fingers after tying together too many balloons.

“Sometimes there are some very early mornings,” Randall said. “If we have to be ready by 8 o’clock at church, it’s very early.”

There are also logistical considerations in getting inflated balloons from one spot to another.

“We had one time when we were decorating for a graduation and had to blow them up in one place and take them to a shelter in the park,” Randall said. “It was challenging when you don’t have a van.”

Neither of them have any formal training in balloon decorating — “It’s not rocket science. You can find YouTube videos about it,” he says — but love to see the joy it brings their friends, family and church.

“We’re pretty happy with whatever we get,” Randall said.

“We’re just out to make the world a better place,” Marlana added.