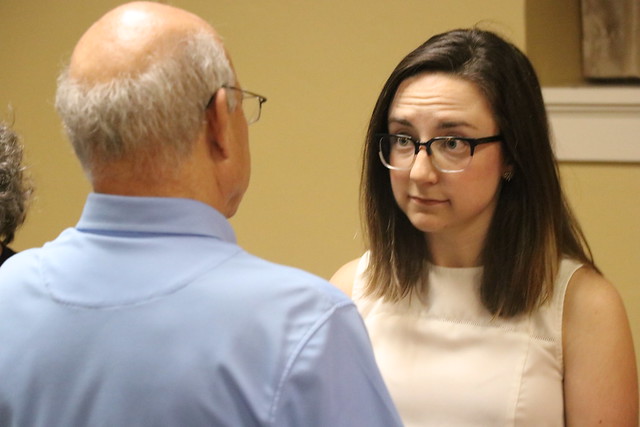 “Civility is not doing well — and it’s getting worse,” said Procter, director of Kansas State University’s Institute for Civic Discourse and Democracy.

He and a team from the institute presented a “Dialogue Workshop” for members of Topeka First UMC on Aug. 25, teaching better speaking and listening techniques to promote civility “from the dinner table to the pews.”

Procter, a member of Manhattan College Avenue UMC, said the denomination wanting to promote fair exchange is nothing new, distributing a list of civility guidelines from the Commission on Christian Unity and Interreligious Concerns that was drafted in 1997 and ’98.

“We’re still addressing some of these same issues,” he said. “What this tells me is that this is hard work.”

He also told the approximately 140 people who gathered at Topeka First that the Council of Bishops spoke out about the lack of the civility in the United States — in 2004.

“We were concerned about how low political discussion was getting,” Procter said to a lull of audience laughter. “We were sure it couldn’t get any worse.”

The group was divided in half for much of the workshop. One half was sent to different classrooms in the church for small-group discussion, where only the person holding the Bible in each room was allowed to speak.

The remaining half was asked to line up from one end of the church’s fellowship hall to the other, depending on their stance on a divisive social issue: physician-assisted suicide. Those on each extreme were paired up with each other throughout the line, getting two minutes each to state their case and another two minutes to reflect back on the original speaker’s views. Groups of two combined into groups of four, where each person introduced their counterpart and explained their support or opposition to the issue.

Marsha Reynolds, a member of Topeka First, didn’t know the people she was speaking with, but said she was harmonious with their moderate views.

“Even though it was something that could have been really, really bad, it ended up on a very positive note,” she said.

Julie Knowles, another member of the church, said waiting to speak until the Bible was in her hand was a valuable exercise.

“That caused me to think, ‘It’s that person’s time. I’m focused on them,’” she said. “It’s been helpful for me to have as a mental tool, to just listen.”

The workshop, Knowles said, helped her become a better listener.

“I wanted to be better at listening, just shutting everything off and not have your mind start working the minute someone talks,” she said.

Speaking to the group after the exercises, church member Anna Walker said she grew to appreciate the feelings behind each opinion.

“Each of our lives is a story,” she said, “and our beliefs and convictions are a part of that story.”

“At some point in the next couple of years, our congregation will have a choice to make,” Clinger said.

The workshop was part of the Tempero Sandall Endowed Fellowship, established in 1982 to provide the members of Topeka First UMC and the community with opportunities to enrich their religious experience through workshops, lectures, seminars and performances.