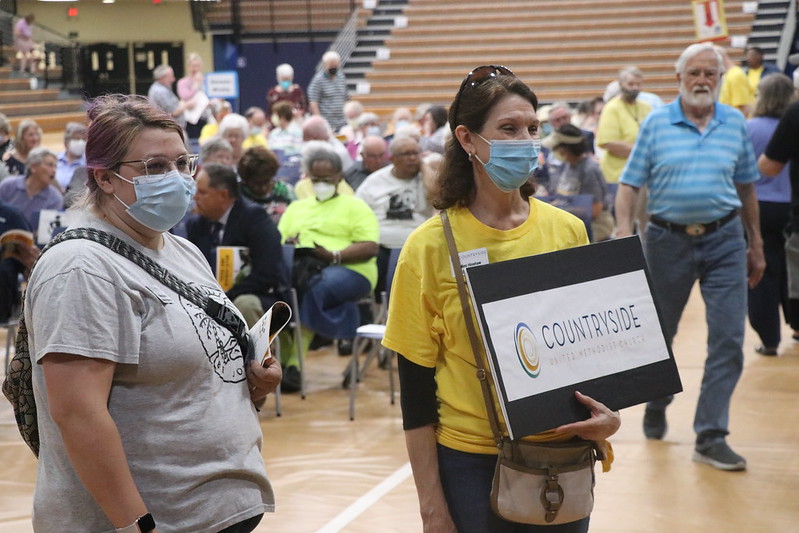 At its Nehemiah Action Assembly on May 9, Topeka JUMP members received a commitment from a representative of a local mental health association to implement crisis stabilization units in Shawnee County.

It fell short, however, of receiving a commitment from the mayor of Topeka to add $5 million to a trust fund meant to implement more affordable housing in the city. Mayor Mike Padilla did agree to consider a $1 million addition.

Topeka JUMP, the Justice Unity & Ministry Project, is a mission of 30 houses of worship in and around the capital city, including seven United Methodist congregations. About 1,000 people attended the assembly May 9 at Washburn University’s Lee Arena.

Established 10 years ago, Topeka JUMP conducts annual Nehemiah Assemblies to report on progress and obtain public commitments from officials to work for changes on topics that the group has determined to be the top priorities in the area.

A crisis stabilization unit, according to JUMP, is a “small inpatient facility for people in mental health crisis whose needs cannot be met in residential settings.” The units may be for voluntary or involuntary admissions. The units are needed, JUMP says, for “those in harm’s way but refusing treatment.”

Dick Kline, a member of the board of directors of Valeo Behavioral Health Center and the retired director of Shawnee County Department of Corrections, agreed the need for crisis stabilization units was long overdue.

“Jail was the only place we could safely house the individual,” he said.

Having safe and affordable housing for Topeka has been a JUMP priority since 2015, said Melissa Weikel of Grace Episcopal Cathedral.

“One thing we have proven is that this organization will not go away,” she said.

Rev. Terry Canady, pastor of the Apostolic Church of Jesus Christ, said affordable housing should be considered in the same breath as economic development.

“Now is the time to include housing as an investment opportunity,” he said.

Topeka has a housing trust fund of $250,000, and JUMP challenged Mayor Padilla to add another $5 million to it.

Padilla said he was not in a position to commit $5 million, but when challenged for a figure he could support, the mayor agreed to $1 million.

“Five million is not a realistic goal, and you cannot get six votes (from the city council),” he said.

The mayor praised JUMP, as well as those who gave sometimes heart-wrenching personal testimony throughout the 90-plus minute assembly.

“You are the courageous people in this community,” he said.

A progress report was given on Oxford House, an addiction recovery residential program that was the result of being a JUMP priority in recent years.

Earlier in the night the crowd was energized by the Rev. Christine Potter of Café Quetzal, a United Methodist coffeehouse ministry.

“I am so proud of this amazing, faithful team that we call JUMP,” said Potter, who is also secretary of the organization. “We’re united in faith, united in justice, and united in work — not our work but God’s work.”