5/24/2017
After the April meeting of the Connecting Council, clergy and lay members to annual conference knew they would have the opportunity to vote on whether to condense three conference offices to one. Now they know if they choose the single-office option they then will get to vote on where that office will be.
Topeka will be the suggested location, based on a recommendation from the location task force endorsed by the conference Board of Trustees.

Initial candidate locations included Topeka, Kansas City, Lawrence, Lincoln, Manhattan, Omaha, Salina and Wichita. Based on factors including the labor market, operating costs, access to air travel and overall quality of life, McCallum Sweeney Consultants – a company that provides businesses, municipalities and organizations assistance with site selection – recommended narrowing the initial list to Topeka and Kansas City. The firm provided information comparing the various markets on those factors before the task force made its decision, which was affirmed unanimously by the Trustees. 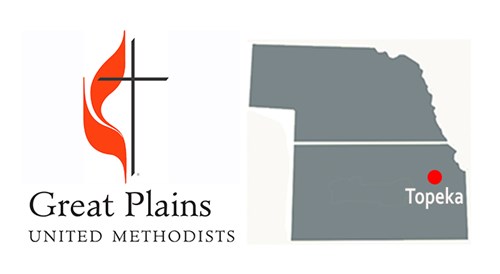 “Topeka's strengths as we saw them were in affordability of housing, cost of living and of available office space, cost per square footage,” said Steve Flader, chair of the conference Board of Trustees. “The committee saw the benefits of being in a smaller metro area, commuting time to an office and a smaller-town feel. Topeka is also closer to the center of church attendance for the conference.”

The location task force – comprised of Flader, Lisa Maupin and Tom Watson from Nebraska and the Rev. Maria Campbell and Lloyd Hamrick of Kansas – began meeting in early May after the Connecting Council tasked the Board of Trustees with presenting a proposal for a single conference office location. The decision grew out of a staffing report presented by the Rev. John Wimberly, a consultant who provided recommendations for the realignment of staff to better fulfill the conference’s mission to make disciples of Jesus Christ for the transformation of the world. In Wimberly’s report, he suggested that conference staff would be more efficient, improve internal communication and foster greater teamwork if it is all in one location. Wimberly stated in his presentation to the Connecting Council that during his more than 160 interviews with staff, clergy and laity in late winter across the two states, it became clear to him that a single office would help the staff better deploy resources to local congregations for use in addressing needs in their mission fields.

To assist the task force with its work, the team hired McCallum Sweeny Consulting, a South Carolina-based firm that reports among its clients Michelin, Mitsubishi Motors, Nissan, DuPont, Procter & Gamble, and several U.S. cities and states. The firm previously consulted on property assessment, evaluation and certification of properties for the state of Kansas and the Nebraska Department of Economic Development.

From the consulting firm’s analysis, the task force unanimously recommended Topeka as the location for a single conference office.


The proposal now will move on to the 2017 annual conference session, during which members will vote first on whether to condense the three offices to one and, second, whether to approve the location recommended by the task force.

Bishop Ruben Saenz Jr. said the decision to maintain three offices when the former Kansas West, Kansas East and Nebraska conferences unified in 2014 was correct at the time.

“Conference staff at all three office sites provided a seamless transition and continuation of mission critical ministries, administration and local church support for the newly formed Great Plains Conference,” Bishop Saenz said. “Their dedicated work and contributions to successfully unify and sustain the conference’s support of the local churches are to be highly commended and deeply appreciated.”

The bishop said now, however, personnel and other resources must be focused on building upon and enhancing the Great Plains Conference’s missional culture and the quality of service and support to the laity, clergy, and local churches.

“A single conference office location will enable us to effectively and efficiently align and faithfully steward our human, material and financial resources in support of our mission,” the bishop said. “Regardless of what is decided during the annual conference session, our staff will remain committed to doing as much is possible to assist local congregations in meeting the spiritual and temporal needs of their individual communities.”

If the annual conference approves the single-office concept and Topeka as the location, the Board of Trustees then will decide whether to lease or purchase an existing building, renovate an existing building or build a new office structure. If renovations or complete construction is necessary, the move may not happen for more than 12 months. And even then, conference staff would migrate to the new location in shifts to ensure the work of the conference continues unabated.