Topeka’s Café Quetzal off to a caffeinated start 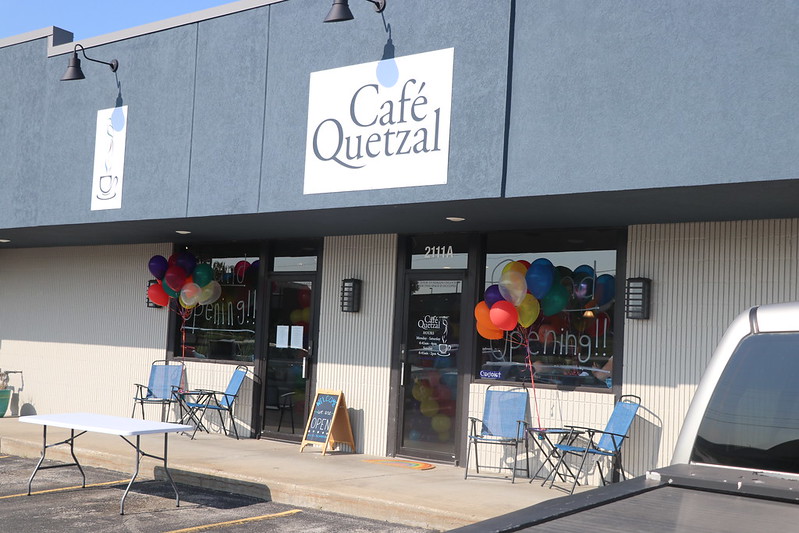 Wielding a pair of what she called “comically oversized scissors,” the Rev. Christine Potter was ready to cut the red ribbon that officially opened Café Quetzal on Aug. 21 in Topeka.

But the big scissors didn’t do the job.

“Where’s that scripture, ‘I can do all things in Christ who strengthens me?’” she said with a laugh as the big pair proved futile.

But a smaller pair of scissors did the trick, snipping to the cheers of about 40 customers and staff outside the café’s doors for the coffeeshop ministry’s grand opening.

Since its opening on Aug. 2, Café Quetzal (2111 SW Belle Ave. Suites A and B) has served coffee, baked goods, salads and sandwiches to its customers as well as being a community center for small groups. It has hosted yoga classes and, the day after its grand opening, provided its first worship service, called The Gathering, attended by 45 people.

Potter thanked the “flight team” who helped with the renovations and opening over the previous few months, as well as the congregations of Topeka Countryside UMC (where she was formerly associate pastor), Topeka University and Perry UMCs (where her husband, the Rev. Jeff Potter, is pastor) and Topeka First UMC for their support.

Business manager Barb Muench thanked the contractors, plumbers and electricians who “entertained our crazy idea from the beginning.”

“We were highly obnoxious, particularly the last week” before opening, she added.

In just three weeks of business, Café Quetzal has regular customers, including Diana Whitney and the Rev. Charles Benton. Both attend University UMC and helped in the renovation of the coffeehouse.

“I just like the concept and look forward to seeing what Christine can do with this,” said Benton, a retired United Methodist pastor.

“This is a wonderful venue. The atmosphere, the happiness, the camaraderie,” Whitney said. “I like the idea of the open concept and the conversation over coffee.”

In just three weeks of business, Potter says the coffeehouse ministry has been “amazing, really amazing.”

Potter said she already is gratified with the interaction among customers.

Potter and Muench were amazed at the attendance for the first Gathering service, a house church-type worship with acoustic music that features communion each week, with each person at the table serving the cup to their neighbor.

“This is a space about eating with people and growing community around the table,” Potter said.

An early attraction to the space is the Prayer Wall, a network of yarns where customers can enter their prayer requests.

“It took off in ways we didn’t expect,” Muench said. “I thought there would be one or two up there before worship.”

Instead, about 100 prayers have been petitioned.

“It’s really cool to have something visible and tangible for people to do,” Potter said. “It brings the community together in a really cool way.”

Most of the people attending, Potter said, did not have a church home.

“That was very promising,” she said. “It’s meant to be a new space for people who don’t have one.”

A weekly Bible study will start shortly, she added.

Café Quetzal has already gained fans among the other businesses at the 21st & Belle shops in Topeka.

“The Topeka community seems really hungry for small business and relationships and supporting local. People also seem to love the model … that this is more than a coffeeshop,” Potter said. “It’s a place for community and for spiritual beings.”