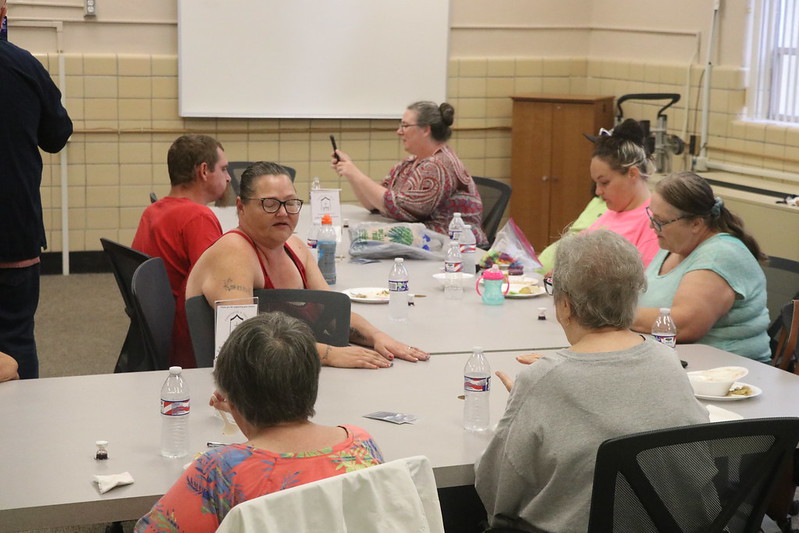 When it came time for Marshall Larson to make a presentation on his ministry plans at the conclusion of a New Church Development workshop 2½ years ago, he winged it.

A longtime guitar player, he talked about bringing a small praise band to neighborhood parks in Topeka, followed by a short sermon and interaction with everyone involved.

“I had no idea they would accept, because we were in the middle of COVID,” he recalled. “This ministry’s all about gathering people together, and here we are in the midst of COVID.” 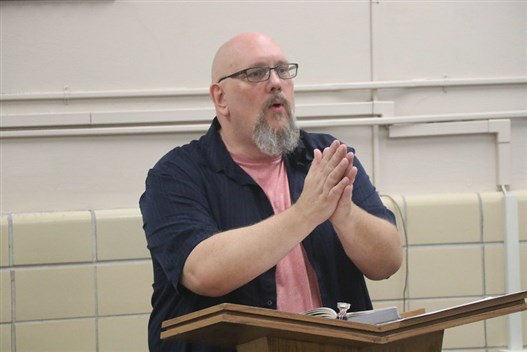 Tabernacle & Table will host Biscuits & Jams from 10 a.m. to noon Saturday, Oct. 1, at the former Lundgren Elementary, 1020 NE Forest Ave., Topeka. It will include biscuits and gravy, homemade jams and music, as well as a raffle, silent auction and games. The suggested donation is $5 per person.

To his shock, his plans were approved.

“They had no indication I knew what I was doing, they just knew I was excited,” Larson said with a laugh. “This idea was something God put on my heart and my wife’s (Roberta) heart. God wanted this to happen, apparently.”

With the encouragement of the late Rev. Nathan Stanton, congregational excellence director (“I loved Nathan. He was just a force of nature,” Larson says), he began Tabernacle & Table, abbreviated TNT, which has pivoted and evolved into a relaxed, weekly Thursday night gathering at a north Topeka community center, with a 6 p.m. potluck meal preceding a 6:30 p.m. worship service.

Larson said Tabernacle & Table has had to pivot its plans several times through the years. It found spaces at Topeka First, Kansas Avenue and New Hope UMCs and various other spaces.

Its latest home, as of mid-August, is the former Lundgren Elementary School at 1020 NE Forest Ave., which has blossomed into a community center that houses not only Tabernacle & Table but Silverbackks, which provides meals and hygiene kits to those in need in the neighborhood; and Sole Reason, which raises money for shoes for people in need.

“There are infinite amounts of opportunities to partner in ministry,” Larson said.

Tabernacle & Table gets a former classroom to itself as a headquarters and shares a commons area where the Thursday night services are conducted.

The possibilities for growth in the new space are tremendous, Larson said, with the former school gymnasium available that could seat 500 people.

“We won’t be outgrowing it any time soon,” he said.

Larson said he and the others in the ministry feel like they have a home in the Oakland neighborhood of Topeka, a predominately blue-collar area.

“There’s a lot of poverty here, and people who aren’t connected to churches or communities. There are some churches here, but they’re all declining,” he said. “Fresh energy’s really important.”

The current live attendance is 20 to 30 people, but Larson says a strength of TNT is its online congregation, sometimes doubling the number in person.

“We have a big online community, and we are all in connection all the time … not everybody’s gathering (in person),” Larson said of the 72-member Facebook group. “We do a lot of praying. If you wanted to pick one thing that we do, we pray more than we play music.”

Larson makes it a point to stay in contact with TNT’s online congregation all week.

Larson said he uses the same lectionary scripture for all of his churches, but tailors the sermons to fit the congregations: Belvue has an older congregation that averages seven and doesn’t want projections or media; St. Mary’s is a more traditional congregation; and Emmett is a country church with lots of children (“Sometimes they have more kids than adults,” he said).

The music is a calling card for TNT, with Larson on guitar as one of five musicians who started the ministry.

Another is Stefani Varnon, who leads the singing along with Regina Asher.

“When we first got together it was a jam,” she said. “It didn’t even have to be a worship song as long as it was supportive of the mission.”

The rest of the current band is George Nocktonick on percussion and Rhonda Tomlinson on banjo and mandolin.

The acoustic songs cover newer praise band material and classic singalongs like “They’ll Know We Are Christians By Our Love.”

Varnon, who is also church business administrator at Topeka First, said TNT has become a community during the past few years.

Larson estimates that 30% of the people who come to the Thursday night services have a Sunday morning church home.

“The rest of them weren’t attending anywhere, because they feel like they didn’t fit in at a lot of other places,” he said.

The informal nature of the TNT service, where the congregation sits around the tables after they’ve eaten dinner, is a draw for many of those attending, Larson said.

He points to 2-year-old Tayzlee Mellott, who was the recipient of a successful kidney transplant in July. She roams the room among her family, friends and newcomers and has her own toddler-sized seat next to the praise band. She will sometimes gravitate to Larson’s lectern during the sermon (“Sometimes she’s cute, and sometimes she’s a wonderful distraction,” he said during the service).

“Tayzlee’s a handful, and they haven’t always felt comfortable in other places,” he said of her parents, Amanda and Trevor. “Here they’re totally comfortable and welcome.”

A native of northern Illinois, Larson is a veteran of the U.S. Army National Guard and the U.S. Air Force, the latter in which he worked as a meteorologist. He owned his own moving company for 15 years and had said he came to a crossroads at age 40, when he sold the business and went to work in door-to-door sales in northern Wisconsin.

His work got him promoted to a job near Kansas City, but ethical differences with the company forced him to quit.

Larson got a job in the “mystery visitor” program in the Missouri Conference of The United Methodist Church as he attended various churches and began to know many of the pastors and church members.

He began course of study at Saint Paul School of Theology to become a licensed local pastor and is on track to becoming a provisional elder.

“God took a really circuitous route for me to get here,” he said

Now that TNT has a home, it’s looking to spread the word about what it is and what it does. Among the outreach is a “Biscuits & Jams” fundraiser from 10 a.m. to noon Saturday, Oct. 1, at the community center.

“We’re hoping the tabernacle part of our ministry can keep getting stronger, going out into the community,” Varnon said.

“We’re going to connect to this community, now that we’ve landed,” he said.

“Communion can sometimes be too serious,” he said. “It doesn’t have to be.”

Nearly three years after Larson verbalized his ideas, he said TNT has lived up to its name.