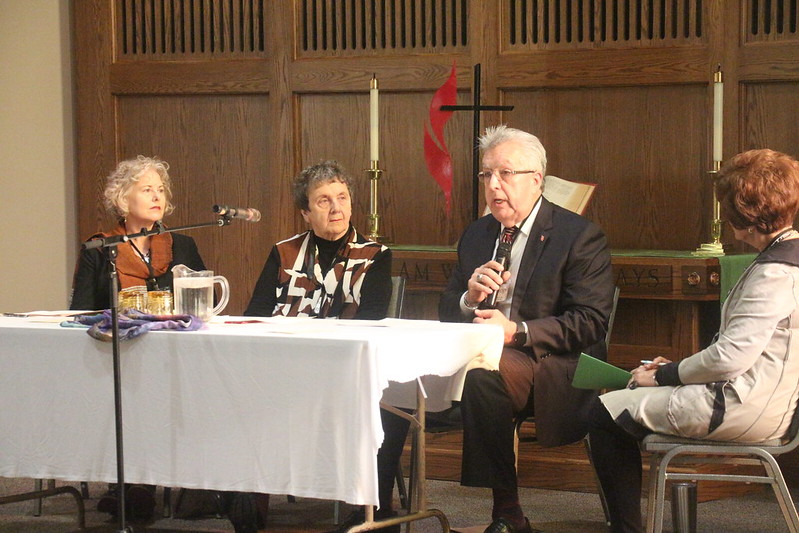 “Honey, this is gonna be hard,” she was warned by her district superintendent as the church’s first female leader.

She was instructed that she couldn’t wear slacks. Congregants crossed their arms rather than take communion from her. A board member screamed, “You have no place in this place” at her. A parishioner took back the piano he had donated to “his church.” A treasurer moved funds around so “that woman couldn’t get it.”

“There’s always something that scares you that if you’re messing up, it’s not just you that’s messing up,” she said. Churches never tell their DSes or bishops, “We had a man. He didn’t work worth a darn. Don’t ever send us one of them again.”

Bishop Sherer-Simpson was part of a panel, along with Great Plains Bishop Ruben Saenz Jr. and Gerise Herndon, Nebraska Wesleyan professor of English, global studies and gender studies, at “For the Transformation of the World,” a Great Plains Mercy & Justice event, Oct. 27 at First United Methodist Church in Lexington, Nebraska.

Gender, sexual violence and faith were the topics of the six-hour event.

Bishop Saenz spoke of the respect he has for the women in his life – his mother, wife, daughter, daughters-in-law and granddaughters – and acknowledged the struggle each generation has to face.

“I’m used to seeing strong women in leadership. I respect them,” Bishop Saenz said. However, “there’s still a lot of work to do.”

Herndon said that while some women are able to speak their opinions, many others aren’t, including LGBTQ members of society, those in incarceration and immigrants.

“What about the people who don’t have access to a microphone and who don’t have a voice?” she asked. “The best thing I can do is shut up and listen and let their stories be told.”

In a question-and-answer session following the panel discussion, topics written by the 50 people in attendance included the use of male pronouns for God in the pulpit, soft sexism in the church and including more people who are nonwhite and nonmales in the Great Plains Annual Conference sessions.

Breakout sessions that afternoon focused on women’s leadership in the workplace and church, from Bishop Sherer-Simpson; rape culture in the #MeToo era, from Herndon; and sexual violence, led by Jamie Synder, founder and executive director of the Center for Sexual Assault and Domestic Violence Survivors in Columbus, Nebraska.

The Rev. Dee Williamston, Salina and Hays districts superintendent, gave the sermon at the close of the event, calling for the church to make a statement regarding sexual, domestic and racial violence.

The Rev. Kalaba Chali, mercy and justice coordinator for the Great Plains Conference, said a survey of last year’s participants favored a discussion of the gender issues, as the #MeToo and Time’s Up movements were in their early days.

“With what is going on in the country, we felt there was a void,” Chali said. “What is the voice of the church? Is the church saying something by staying silent? Or is the church going to speak and speak from Biblical witness?”

The Rev. Sarah Marsh, associate pastor of Manhattan First UMC and a chair of the mercy and justice committee, said the topic was chosen before news events such as the confirmation of Supreme Court Justice Brett Kavanaugh and the explosion of sexual misconduct allegations against executives, entertainers and politicians.

“When we planned this, we had no idea what would happen on the national scene,” Marsh said. “It became all that much more important that the church become part of the conversation, where women’s voices could be heard and could be raised and women’s experiences could be valued.”