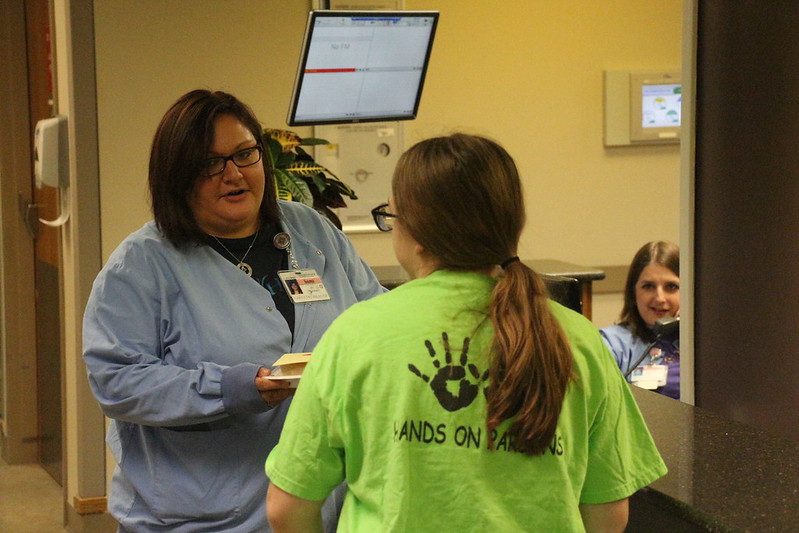 The only uncooperative part of the third-annual Hands on Parsons on Oct. 8 was the dew covering the benches in Forest Park where volunteers from the city’s three United Methodist churches gathered.

“We’re the hands and feet of God,” the Rev. Tim Bever, pastor of Wesley UMC, told about 80 volunteers standing, rather than sitting on the benches, at the park bandshell. “We might as well get started without sitting down.”

After a short worship service that included communion and Bever’s blessing of participants’ hands with oil, volunteers from the churches – Faith, Hamilton Chapel and Wesley – fanned out across the southeast Kansas town of nearly 10,000.

While sending members into their hometowns to do service projects has become a growing occurrence in other churches, Hands on Parsons is rare because it combines efforts of a trio of congregations.

“The three United Methodist churches that are in town are fairly connected in many other ways,” said the Rev. Pauline Clugston, pastor of Faith UMC. “There are thoughts maybe next year we might expand it to be ecumenical. We’ve had some discussions about other ways to expand it into the community.”

With most dressed in their bright-green Hands on Parsons T-shirts, the volunteers traveled throughout town with their choice of nine different projects.

At the Parsons Arboretum, two dozen volunteers helped in many ways, including planting 1,000 tulip bulbs donated from the Botanica gardens in Wichita.

“I think it’s a great opportunity for people to get out and see what’s going on,” said 92-year-old Ken Ervin, a longtime member of Wesley UMC and Arboretum board chairman. “The Methodist Church has always been great for the Arboretum.”

Volunteer Jeannie Mills, a member of Wesley, was taking pictures with her cellphone before she began digging in the dirt.

“I like to see the before-and-after and enjoy what’s changed,” said Mills, in her third year volunteering for Hands on Parsons.

“These kids have washed windows. They’re cleaning out the offices for us, washing the decks. One crew knocked down spider webs,” said Linda Semrad, president of the board of directors of the shelter.

Semrad said she was glad for the assistance.

“We have volunteers, but when you’ve got 20-plus dogs and 20-plus cats to take care of, we don’t have time for extra stuff,” she said. “This is really, really appreciated.”

A six-person crew worked at clearing the front yard of Ragena Bone’s home in north Parsons.

“I haven’t been able to do hardly anything anymore, and I like to keep my place looking nice. I’m surprised to see so many,” said Bone, a member of Faith UMC. “It’s amazing that they worked all this time to help people’s homes looking nice.”

“We just like doing it. The kids like to come out and help,” she said. “It’s just something we enjoy doing.”

Other volunteers led worship at nursing homes, made and delivered cookies for Labette Health and first responders who were working on a Sunday morning, and helped prepare the lunch for volunteers at Wesley UMC.

Bever, who began as pastor at Wesley in July, said an effort like Hands on Parsons was good for both church members and those in the city.

“I hope everybody had a good time serving God,” he said. “It’s just great for a community to see that churches actually do care. So often people think we’re focused inward, and we want people to know (we’re) not that way.”