UNDER ONE ROOF: From three denominations to two

United Faith Community Church has entered into a rare state of flux.

Its pastor of 20-plus years, Carl Ratcliff, retired in midsummer, and the Sept. 12 service was its first without him.

“When a church doesn’t have a senior pastor, it can be an unsettling thing,” Pastor Jeff Peterson, the first of several interim pastors, told the congregation of about 60 in Valley, Nebraska. “In the right time, God will bring the right person here.”

“It was World War II, and the Baptists couldn’t get any ministers, but the Presbyterians could,” Ratcliff explained. “I’ve heard from some that it was just for the duration of the war, but I heard from others it was ‘Oh no, we planned on being together the whole time.’”

The United Methodists were brought into the church in 2006.

This is the second of a four-part series called "Under One Roof," about churches in the Great Plains Conference that share United Methodists and other denominations. .

United Faith is one of 21 churches in the Great Plains Conference where United Methodists are combined with another denomination.

Valley is considered a “Federated” church, where incoming church members declare their denomination at the time they join.

The church contained three denominations — Baptist, United Methodist and Presbyterian — and nicknamed itself “BUMP” until six years ago, when affiliation with the Presbyterian Church USA was dropped after its affirmation of same-sex marriages performed by clergy.

“It’s a pretty conservative congregation overall, and they were concerned about the direction the different denominations were going,” Ratcliff said. “Part of what they wrote into their constitution was, ‘If any of the denominations — not knowing which one might do it — would choose to officially recognize same-sex marriage, recognize abortion, recognize gay and lesbian ministers, they would delete them from the constitution.”

Like the United Methodists, the American Baptists — of which United Faith Community belongs — is addressing questions on issues regarding human sexuality, including gay and lesbian pastors and whether pastors can be allowed to perform same-sex weddings.

“One of the choices is to be in the more conservative branch, and they’ll have to make that choice,” said Lee Foreman, a retired pastor at the church who serves as choir director. “When it comes time, we’ll meet together and decide.”

With a Catholic, a Lutheran and a small Baptist church in the town of 3,000, just northwest of Omaha, United Faith Community sees itself as an alternative.

“We support the mission outreach and the greater conference of each denomination,” Foreman said. “As far as the people themselves, each one of them claims a unique church — Baptist, Methodist, Presbyterian — but that isn’t the emphasis. The emphasis (is) on ministry to the community. It’s really become a community outreach.”

With its high columns and recently painted gray exterior, United Faith is housed in the former Baptist church. A baptistry is on the altar, covered in cloth and topped with a floral arrangement.

Foreman said Methodists bring their babies for a sprinkle baptism, while older youth and adults who are Baptist can choose immersion.

Ratcliff said that during its days as “BUMP,” members could declare themselves as Baptist, United Methodist, Presbyterian or “none of the above.”

“This was kind of that fourth option to be none of the above. They could participate in their local church but say ‘I’m not a part of that denomination,’” he said. “It was kind of an escape route for some folks.”

Ratcliff was raised as a Quaker and was a Quaker pastor for 10 years before spending another decade working in construction. He and his wife began attending Valley in 1997, and years later was asked to temporarily take the pulpit. With the agreement of both denominations at the time, he was baptized in water on Sept. 9, 2001 – “two days before 9/11,” he said — satisfying both denominations, since Quakers performed “dry” baptisms, Ratcliff said.

The only stipulation in finding his replacement, Ratcliff said, was that the new pastor had to be an ordained minister by either of the denominations currently in Valley.

Ratcliff said the business of the church’s two and sometimes three denominations — reports, meetings, supervision and differing names for different groups — could be frustrating at times.

“If you focus on the things you’ll agree about, you’re gonna get a whole lot more done than if you just focus on the differences,” he said. “The most fulfilling thing, ultimately, a healthier church in the long run.”

After taking two sabbaticals in the 2010s, and after his most recent in 2018, Ratcliff returned to a church where he no longer had to do the quadruple play of preach, give announcements, lead children’s time and deliver scripture. The lay people of the church took over all but preaching, which he said changed the tone of the service.

“You were never sure what you were going to get when you came to church. Sometimes it would be a Methodist-style service and then something totally different,” he said.

“The denominations have been fairly lenient because on the Methodist side we have different committees and administrative teams and trustees,” he said. “All our names are different than that, and the Presbytery has different rules, and the Baptists have new rules. Each church is independent so they set it up their own way.”

However, Ratcliff said, he said he has discouraged any talk about going independent.

For every frustrating time he had, Ratcliff said, there was always something “wonderful” to balance it out.

“It was like having a purebred dog,” he said. “They all have certain things and certain faults. But when you get a mongrel, a Heinz 57, it’s probably the best dog you’ll ever get.” 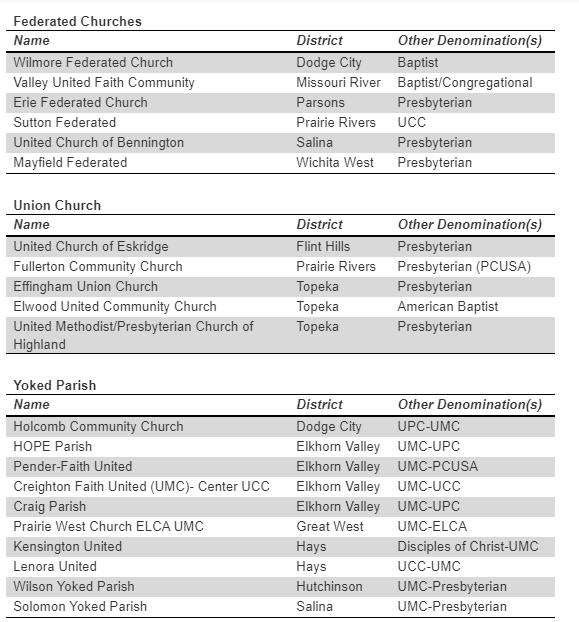 From Business of the Annual Conference, 2021