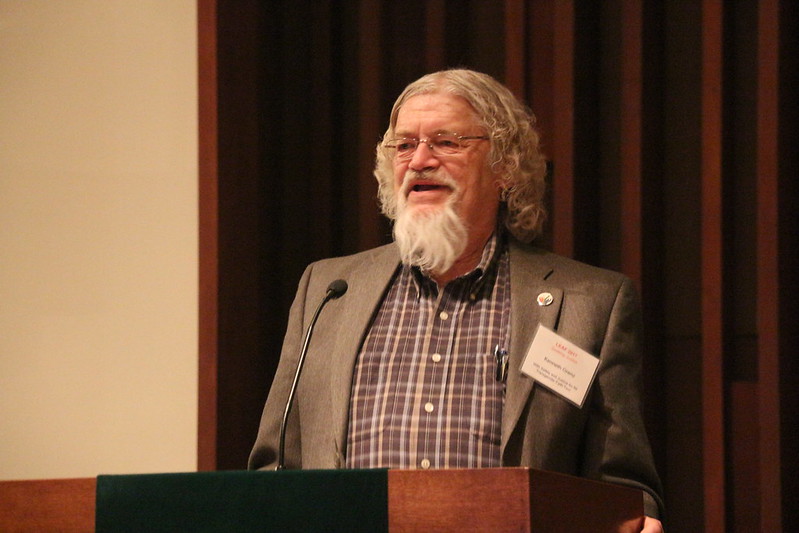 Continuing a tradition of learning about political issues in Kansas from a faith-based perspective, United Methodist Women in Kansas brought lay persons, experts and advocates together Feb. 12-13 in Topeka.

The 42nd annual Legislative Event for Advocacy in Faith, or LEAF, brought more than 110 women – and a few men – to First United Methodist Church in Topeka.

The event’s keynote speaker was Judge Ardie Bland, a Kansas City, Missouri, municipal court judge who has tried to divert a growing prison population by unorthodox sentences such as having the convicted write essays.

Bland said the number of people in jail in the United States for burglary, assault, robbery, murder and rape – about 700,000 – is less than the 720,000 incarcerated for lesser crimes.

“Is that really justice?” Bland asked. “Are we really seeking justice if those numbers match?”

While on the bench, Bland established a truancy court and a veterans’ treatment court, as well as someone to monitor mental-health related convictions.
Bland said he looked to the biblical examples of Moses, David and Paul, those who had criminal reputations before they became believers.

“God didn’t throw any of their lives away,” Bland said. “He turned them into better people.”

Bland said he is seeking methods through the bench to curb the homelessness problem in Kansas City.

“Crime goes down when the homeless have a place to stay,” he said.

A panel discussion of “Advocacy Talking Points” featured Judith Deedy, of Game On for Kansas Schools; Larry Weigel, a Manhattan-based financial services agent who has become a Medicare advocate; Amanda Gress, director of government relations for Kansas Action for Children; and Jessica Stephenson, a program specialist with the International Rescue Committee.

Game On for Kansas Schools, Deedy said, encourages transparency and distributing information about educational funding in the state.
“We encourage people to get off the sidelines and get in the game,” she said. “We work very hard to unspin the spin.”

Weigel said he was worried about the new administration of President Donald Trump, particularly in its plans to repeal and replace the Affordable Care Act.

“I don’t think they were thinking about their contingency,” said Weigel, also troubled by any talk of privatizing Medicare. “We are in a dangerous mode right now.”

Gress said Kansas Action for Children is busy defending the state safety net for the estimated 122,000 children in the state who are living in poverty.
She said she had hopes for Senate Bill 95, which would “make the safety net work better and reach more kids.”

Stephenson said that under President Barack Obama, an estimated 110,000 refugees would have been allowed into the country in the current fiscal year. Under the Trump administration, that number has been cut to less than half, 50,000.

“Now more than ever, we need your support,” Stephenson said.

She disagreed with those who say that the current refugee program allows the criminal element to enter the country.

“Refugees are the most thoroughly vetted group of foreigners to enter the United States,” Stephenson said.

At lunch, the attendees dined with their representatives in the Kansas House and Senate, asking them their stance on the issues and what they think are the biggest concerns in the 2017 Legislature.

The two-day conference began with a legislative review by Sen. Carolyn McGinn (R-Sedgwick) and Rep. Jim Ward (D-Wichita), and a keynote speech on “Justice as a Spiritual Practice” by Rev. Sarah Oglesby-Dunegan of the Unitarian Universalist Fellowship of Topeka.