Just as Jesus reached out to men who would become His disciples along the shore of Lake Gennesaret, The Water’s Edge Church is reaching out to the people of Omaha to make 21st century disciples.

The Water’s Edge worshiped in its new building for the first time March 18, marking the start of a new chapter for a ministry that began 12 years ago as a multi-site ministry of Faith-Westwood United Methodist Church in Omaha. That church and the new congregation grew steadily, resulting in the chartering of The Water’s Edge in 2012.

The Rev. Craig Finnestad has served The Water’s Edge congregation since its inception and has seen the steady progression of a fledgling congregation blossom into one of the larger churches in the Great Plains Conference.

“Both Faith-Westwood and the Nebraska Annual Conference were so supportive in the early years, and we wouldn’t be where we are today without them,” Finnestad said.

The Rev. Doug Delp, current pastor at First United Methodist Church in North Platte, Nebraska, was serving as pastor at Faith-Westwood UMC when the congregation discerned a vision for a multi-site church.

“I think the church had felt like it had become a little inward-focused, so after I had been there awhile, that desire to be outward-focused really began to take hold. It was all a very natural fit but a little different expression of how to reach out beyond the walls of the church – in this way with a second site.”

Delp said the decision came relatively quickly as to where the new campus would be located.

“We concluded that we could go anywhere in Omaha,” Delp said. “But we felt sure that since we were in west Omaha that we knew west Omaha people.”

Delp was succeeded at Faith-Westwood UMC several years later by the Rev. Steve Todd. The issue of whether to remain a single church or to transform into two congregations came up almost immediately.

“Bishop Ann Sherer called Craig and me into her office and told us we needed to figure out if we were one church or two,” Todd said. “So we began a process of discernment and to help the congregation discern. We had town hall meetings that at times had some high emotions, but eventually we had a church conference, and I believe the vote was something like 90 percent in favor of having Water’s Edge become its own church.”

“Did we have hurdles to deal with? Yea, but we stayed positive and worked through things,” Todd said. “It definitely took a lot of energy to act like one church when functionally we were not. But I think it turned out to be really healthy for both, maybe even more for Faith-Westwood than for Water’s Edge. It’s kind of like when you send your daughter off to college, and now you have to figure out who you are again. That’s what we did as a congregation.”

While Faith-Westwood re-established its identity, The Water’s Edge starting forging its own culture within the ministry context of western Omaha, first at a middle school and then at Millard West High School.

The church actually takes its name from another story centered on water: Mark 4:1-2, which recounts Jesus encountering a crowd so large and eager to learn from Him that He climbed into a boat and began to teach from the edge of the water. The parables Jesus used helped the people understand aspects of God’s Kingdom, and Jesus’ message changed their lives.

Positively impacting lives is the continuing goal of The Water’s Edge.

Watch a video from the first Sunday for The Water's Edge in its new building.

“We practice Christianity by participating in weekly life groups and worship, serving in the church, serving in local and international missions, investing in the next generation, practicing generosity, and meeting people where they are and inviting them to join our movement,” Finnestad said.

One tool is the new building, positioned at 19600 Harrison St., just off U.S. Highway 6 in the far western portion of Omaha. Finnestad said the goal for the building, which was consecrated during a service attended by Bishop Ruben Saenz Jr. on April 8, was to create a structure that churches will construct 10 years from now, not what was built 10 years in the past, meaning a sleek look and superior function were important – all aimed at providing a base for disciple-making.

“We succeeded,” Finnestad said. “As fun and functional as the new building is, we are committed to not worshiping a building, but being the church.”

So far, the move has helped bring in even more people. The church averaged about 600 adults and 175 children fifth grade and under during its final few months worshiping at Millard West High School. Since moving into the new building, the church is averaging about 1,000 adults and about 300 children.

“The Water’s Edge congregation counters the prevailing reality and narrative of mainline church decline as more people, new people, and more divers people find acceptance and belonging in the vibrant faith community,” Bishop Saenz said. “I was elated to learn that 500 laity volunteer in ministry and that 80 percent of the people at The Water’s Edge participate in 40 lay-led life groups that meet weekly throughout the city. Through the ministry of accountable life groups, people grow in their love of God through intentional faith formation.”

The bishop said God is worthy to be praised for leading a “small group of missional pioneers” from meeting 12 years ago in the basement of the home of Finnestad and his wife, Amber Lawrence, to what is now a growing congregation.

“I understand that The Water’s Edge leadership is already making plans to build more parking, expand their facilities, and is praying about the launch of a second campus within the next five years,” Bishop Saenz said. “Adelante!”

Finnestad said the day of the first worship that chapter one for the church is now completed, and chapter two was just beginning.

“It’s been so cool and rewarding to see The Water’s Edge grow from a dream to what it is today,” Finnestad said.

Learn more about The Water’s Edge from its website. 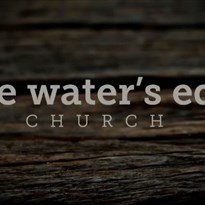