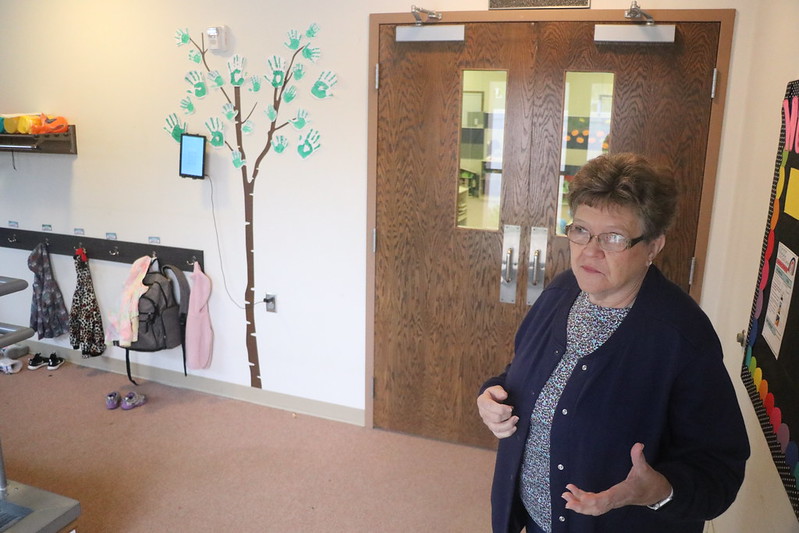 In early November 2020, with its membership dwindling to eight to 12 attendees, the church council voted to take steps to close the church during a Sunday afternoon meeting.

“Nobody wanted to do it. Nobody ever wants to close a church,” Pastor Kathy Uldrich said.

Within two days, Uldrich got a call from Angela Keiser, president of the Kenesaw United Child Care Coalition board, saying they were interested in the building.

“I said, ‘Angela, that’s not even public knowledge yet!’” Uldrich recalled.

Word traveled fast in the central Nebraska town of 1,100.

“That following Sunday when I announced in church from the pulpit that we had interest in the building for a child-care center, the whole congregation’s demeanor just changed,” Uldrich said. “They went from down and sad to ‘Something is happening with this building; we’re going to keep it in vision and ministry, and we’re not going to have it boarded up and run over.’”

Less than a year later, the former fellowship hall at the church, an addition built in the 1990s, is bustling with 15 active preschoolers and seven infants, who are in a corner partition at what is now Kenesaw United Childcare Center.

Having preschoolers and infants at the day care, as they have been since mid-September, is the first of two phases for the building. A second phase, promised by the construction company to be complete before the end of the calendar year, would move the preschoolers and infants into a larger space in the former sanctuary and bring grade-schoolers from Kenesaw Public, a block and a half away, to the former fellowship hall for afterschool programs.

“It’s a perfect connection for the afterschool program,” Deb Adams, the coalition board treasurer, said of the dozen children in need of the service.

The steep outside steps to the former sanctuary are also being replaced with more a more reasonably sized staircase.

Uldrich, a parttime local pastor who served in ministry at Kenesaw for its last two years, could have stepped away from the church altogether, but stayed committed to the daycare project, hinting she may depart from the board next year.

“I needed to stay,” she said. “This was so near and dear to my heart to see something happening to this building.”

Uldrich is still pastor in nearby Juniata, where she lives, and in Holstein.

“We truly needed that bridge,” Adams said. “Kathy has done so much to ease that pain and making that bridge. We were starting this project with a leap of faith that they were truly going to go through with it.”

Uldrich’s influence is a part of board meetings as well, Adams said, including leading prayers at the beginning and ending of each meeting.

The childcare center still will have some religious elements, including what Uldrich called a “subtle, gentle” Christian education. The remodeled sanctuary has removed all but one of the stained glass windows, but will replace the tops of the four windows on the side with four stained glass scenes — one for each of the Gospels.

“It’s been a really strong feeling to keep the identity of this structure in this community that they know this structure was a church, and its mission and ministry is continuing through childcare,” Uldrich said. “United Methodists are all about kids anyway.”

An initial concept from an out-of-town, “bigger city” architect, Keiser said, included ways for the building to “not look like a church.”

“Our board has always responded with, ‘No, we love that,’” the board president said. “The outside still holds to what has always been a part of this community, with a legacy we hope to continue for many decades to come.”

The building and land were donated by the Great Plains Conference to the daycare, estimated to be a $350,000 gift. When the church closed out its finances, it had $110,000 remaining that went to the renovation through the village board.

The entire renovation is estimated at $1.09 million, which also includes constructing an outdoor play area. Fundraising also includes a first-year startup cost of $250,000 and a $500,000 endowment to ensure sustainability.

“We didn’t want to do all this and have to close in a few years,” Keiser said. “It was very important to us that we have a childcare center that was affordable and accessible to everybody. So, with that we wanted to keep tuition rates low but be able to pay quality staff.”

So far $916,000 has been raised in pledges (kenesawchildcare.com), and the board is in search of grants from state and regional organizations that can help accomplish the goal.

Much of that money has come from pledges by Kenesaw alumni, Keiser said.

“They still have that pride of growing up here and being connected to Kenesaw, and they responded positively,” she said.

The quick turnaround says a lot for the community, Adams said.

“Kenesaw’s pretty progressive — we’ve grown in the past 10 years by 200 people — so we’re trying to stay progressive by not letting buildings sit,” she said.

The daycare is open 12 hours daily weekdays, from 6 a.m. to 6 p.m., and although the rates are the same for all children, some families are offered scholarships. The daycare employs eight to 10 teachers, and volunteers are being sought to pitch in a few hours at a time.

Keiser, who has worked with Uldrich on church websites, said the community has benefitted from the church’s leap of faith.

“It was a very brave step for the congregation to start that process and to hand over the reins to our group,” she said. “I feel like now, looking back, the people who came here for church are really excited. They took something that was sad and hard and turned it into something that will continue God’s kingdom, just in a different way.”